When lack of education kicks in: Nigerian police arrest a goat for being a ‘shape-shifting armed robber’

by Mihai Andrei
in Offbeat, Other

You may have heard a joke or two about police intelligence, but nothing goes even close to these guys in Nigeria. In 2009, Nigerian police held a goat for being an “armed robbery suspect”, as a spokesman eloquently explained. 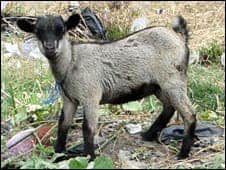 The goat was handed to them by a vigilante group which said the unfortunate animal was a shapeshifter who tried to steal a car, but transformed into a goat when caught. The police took the goat into custody until the charges were cleared.

Police reform activists have condemned the “arrest”, saying it highlights the low education levels of many Nigerian police officers. Sadly, in many African countries police relies on these semi-legal vigilante groups – ill educated and badly prepared for the job. Apparently though, policemen themselves don’t set the bar too high. As funny and pitoresque this event may be, it paints a gloom picture.

In other news – goats are THIS awesome.