by Mihai Andrei
in Offbeat, Videos
A A

They say you can’t fold a paper seven times, because its resistance gets too strong. The Hydraulic Press Youtube Channel set up to see if that myth really is true – with a hydraulic press, of course. The result was quite surprising (more info after the video): 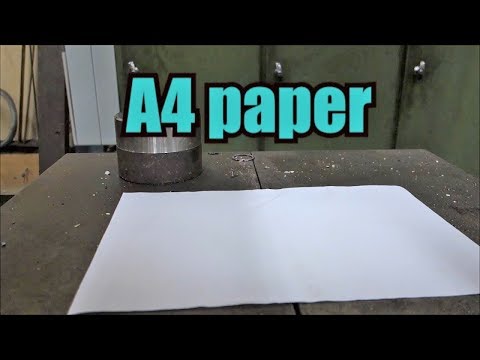 The first folds went pretty easily by hand, but the folding got much harder fast. This happens for two reason: first of all, the number of layers doubles with each every fold. If you fold it once, you have 2 layers, if you fold it twice you have four layers and so on. If you fold it 7 times, you have 2 to the power of 7 layers, so 128 layers – quite a lot. Secondly, the relative size of the remaining paper is so small compared to the folds that it becomes much harder to bend. Add in the distortion caused by the wrinkles, and the paper simply doesn’t have enough flexibility to be bent again. I think this is what happens in this video, and this is why we see the mini-explosion. There may also be some air trapped within, pressurized and unable to go out.

Some people have managed to fold paper even more times, and there’s even some math analyzing how many times you can actually fold it in total – but that math was proven wrong by a high school student.

The current record for the most times a standard A4 has been folded in half is twelve, and was set by Britney Gallivan more than 10 years ago when she was only a high school student. What’s interesting is that mathematicians at the time thought it was impossible to fold it more than seven times using input human input energy, i.e. your hands. Britney wasn’t unusually strong — just  very clever about it.