Are cats really afraid of cucumbers?

In recent days, the internet has been flooded with images and videos of cats having hilarious reactions to cucumbers stealthily placed behind them.

by Mihai Andrei
in Offbeat, Videos
A A

In recent days, the internet has been flooded with images and videos of cats having hilarious reactions to cucumbers stealthily placed behind them. But are cats actually afraid of cucumbers, and if yes… why?

By now, you either know exactly what I’m talking about, or have no idea at all. If you’re in the second category, this short video might shed some light: 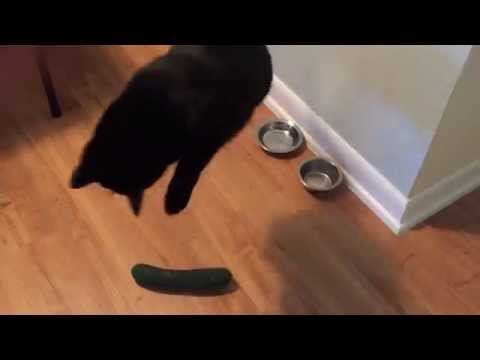 In order for it to work, you have to sneak behind the cat while it’s eating, and when it ultimately discovers the cucumber, it will jump or just run away scared. People wanted to try that on their own, and so they did – and the internet went crazy.

Why, you may ask? Because cats really seem afraid of cucumbers, as you can see below. There’s even a section on reddit, ‘cucumbers scaring cats’, dedicated to… well, you get it by now.

But why is this happening? I mean, it all seems so random, it’s hard to find a cause, and there likely isn’t one. Dr Roger Mugford, a specialist in animal behaviour said in an interview:

“I think that the reaction is due to the novelty and unexpectedness of finding an unusual object secretly placed whilst their heads were down in the food bowl.

“Cats have to be suspicious of the unknown: it could represent the danger of a snake or another predator. I suspect that there would be the same reaction to a model spider, a plastic fish or a human face mask.

“So not an inherent feature of cucumbers, just their unusual context.”

So in other words, they’re just surprised and scared about something behind them – you can try it with bananas, or anything else… you know, for science.