The Makeout box: the latest internet sensation… or maybe not

by Tibi Puiu
in Other, Technology 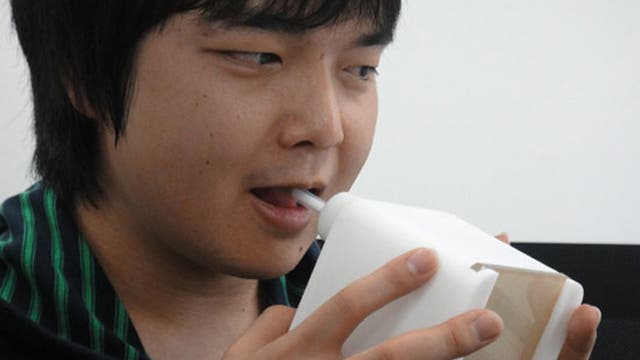 Researchers from the Kajimoto Laboratory at the University of Electro-Communications are really exited about their latest innovation in what can be scientifically described as tactile communication or in more direct terms as the “makeout box”.

The Kiss Transmission Device is basically a plastic box which gets connected to a PC and receives data from the other end, which also has a similar device connected to it. The box has a sort of straw attached to a rotating axle, which the kisser puts it in his mouth and moves it with his tongue. The movement is then observed by the software, interpreted and then recreated at the other end. Basically, it allows two people on the web separated by thousands of miles to kiss – that is if you believe a kiss doesn’t include emotion, another tongue or another person for that matter.

“The elements of a kiss include the sense of taste, the manner of breathing, and the moistness of the tongue. If we can recreate all of those I think it will be a really powerful device,” claims the Kajimoto Laboratory creators.

From where I see it, this device is a big flop from the start or an emerging sensation, and its developers are already seeing its marketing potential, claiming the device can store a person’s manipulation and recreate it at will – a sort of kiss recording.

“For example, if you have a popular entertainer use this device and record it, that could be hugely popular if you offer it to fans.”

Imagine a box set which would come with the Kiss Transmission Device and a video of your favorite celebrity using the device. I know, it’s hard to imagine, and personally I think it’s a really stupid idea, but you can never know…

Check out the video below with the makeout box in action.