How it rains on different planets: what the science says

It rains water on Earth, but on Titan, it rains with methane. Find out how it rains on other planets. 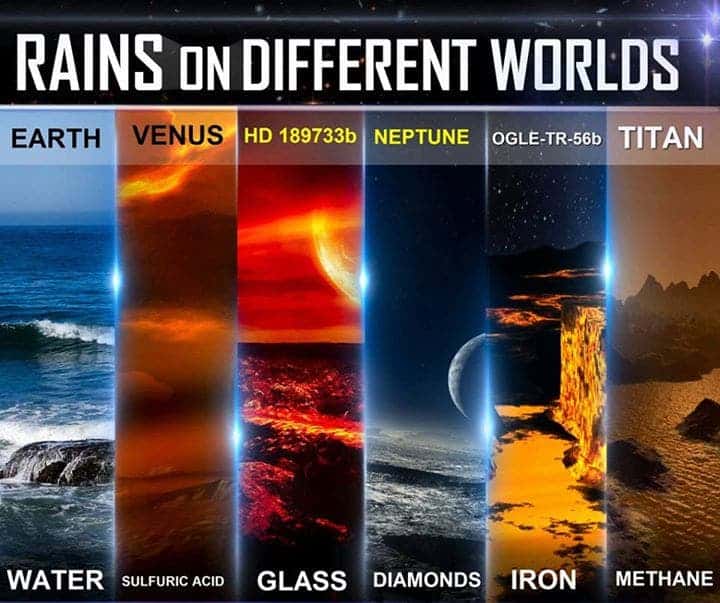 You may have seen this image making the rounds on social media, but is it really true? Sure, Earth is the only place with liquid water and we know it rains here, but do other worlds also have rain? Perhaps rains of methane, iron, or even diamonds? Let’s find out.

Does it rain sulfuric acid on Venus?

Venus is the second planet from the Sun, and in many ways, it is just like Earth. It’s similar in size, mass, composition and even proximity to the Sun — but that’s where the similarities end. The atmosphere of Venus is composed of 96.5% carbon dioxide, while most of the remaining 3.5% is nitrogen.

Its atmosphere is extremely dense, and it’s estimated that the atmospheric mass is 93 times that of Earth’s atmosphere, whereas the pressure at the planet’s surface is about 92 times that at Earth’s surface. Early evidence pointed to the sulfuric acid content in the atmosphere, but we now know that that is a rather minor (though still significant) constituent of the atmosphere.

Because CO2 is a greenhouse gas and Venus has so much of it, temperatures on the planet reach a scorching462 °C — much higher than that of Mercury, which is much closer to the Sun.

The Venusian atmosphere supports opaque clouds made of sulfuric acid, extending from about 50 to 70 km. Beneath the clouds, there is a layer of haze down to about 30 km and below that it is clear. Above the dense CO2 layer there are thick clouds consisting mainly of sulfur dioxide and sulfuric acid droplets.

The thing is, there is no rainfall on the surface of Venus — while sulfuric acid rain falls in the upper atmosphere, it evaporates around 25 km above the surface. Also, sulfur dioxide concentrations in the atmosphere, which dropped by a factor of 10 between 1978 and 1986, which suggests that the sulfur in the atmosphere actually comes from volcanic eruptions.

The clouds are also extremely acidic and there is also lightning on Venus. The sulphuric acid droplets can be highly electrically charged, and so they offer the potential for lightning. The surface of Venus can be accurately described as a hellish and unforgiving place.

Verdict: It does rain sulfuric acid on Venus, but not on the surface, rather at 25 km high in the atmosphere. The sulfur may come from volcanic eruptions.

HD 189733b is an extrasolar planet approximately 63 light-years away from the Solar System. The planet was discovered in 2005.

With a mass 13% higher than that of Jupiter, HD 189733 b orbits its host star once every 2.2 days, making it a so-called hot Jupiter. Hot Jupiters are a class of extrasolar planets whose characteristics are similar to Jupiter, but that have high surface temperatures because they orbit very close to their star.

The planet was discovered using Doppler spectroscopy — an indirect method for detecting extrasolar planets. Basically, you don’t observe the planet itself, you study its stars and notice any tiny wobbles in it with Doppler shifts. In 2008, a team of astrophysicists managed to detect and monitor the planet’s visible light the first such success in history. This result was further improved by the same team in 2011. They found that the planetary albedo is significantly larger in blue light than in the red. But the blue doesn’t come from an ocean or some watery surface – it comes from a hazy, turbulent atmosphere believed to be laced with silicate particles – the stuff of which natural glass is made.

The planet has incredibly fast winds and the estimated temperature of over 1000 degrees Celsius, so the rain is likely more horizontal than vertical.

“It rains glass, sideways, in howling 7,000 kilometre-per-hour winds,” Frederic Pont of the University of Exeter.

NASA astronomers now believe that the planet has a scorching temperature around two times higher than Venus, and almost certainly features a dry atmosphere — there’s almost certainly no water on its surface, though there is a possible condensate in its atmosphere, magnesium silicate (MgSiO3), raining down as solid fragments.

Verdict: We don’t know for sure, but it likely rains silicate particles (you can consider them glass) on the planet we call HD 189733b.

Does it rain Diamonds on Neptune?

Neptune is the eighth and farthest planet from the Sun in the Solar System (sorry Pluto). Neptune’s composition is similar to that of Uranus and different to that of gas giants like Saturn and Jupiter.

Neptune’s atmosphere is composed primarily of hydrogen and helium, along with traces of hydrocarbons and possibly nitrogen; however, it contains a higher proportion of “ices” such as water, ammonia, and methane.

Neptune’s weather is characterized by extremely dynamic storm systems, with winds reaching speeds of almost 600 m/s (2160 km/h). The abundance of methane, ethane, and ethyne at Neptune’s equator is 10–100 times greater than at the poles. It has been theorized that Uranus and Neptune actually crush methane into diamonds, and lab experiments seemed to confirm that this is possible. However, you need significant pressures to do that, and you need to go some 7000 km inside the planet – but keep in mind, the planet is made out of gas (grossly 80% hydrogen, 19% helium and 1% methane).

“Once these diamonds form, they fall like raindrops or hailstones toward the center of the planet,” said Laura Robin Benedetti, a graduate student in physics at UC Berkeley.

Diamonds may be very rare on Earth, but astronomers believe that they are very common in the universe. Molecular-sized diamonds have been found in meteorites, and recent experiments suggest that large amounts of diamonds are formed from methane on the ice giant planets such as Uranus and Neptune. Some planets in other solar systems may consist of almost pure diamond.

As for the rain, it’s estimated that at a depth of 7000 km, the conditions may be such that methane decomposes into diamond crystals that rain downwards like hailstones.

Neptune and Uranus aren’t unique in this regard. There is a very good chance that many other gas giants in our galaxy have similar atmospheres. In fact, a recent study found that one particular planet called 55 Cancri E has a mantle that may be mostly diamond. That’s because the planet’s composition contains high levels of carbons, which, at expected temperatures and pressures, would be compressed into diamonds.

Verdict: It likely rains diamonds on Neptune, but not on the surface — 7000 km deep into the depths of the gas planet.

Out of all the planets here, we know the least about OGLE-TR-56b. Astronomers from the Harvard-Smithsonian Center for Astrophysics (CfA) in Cambridge detected it back in 2003. At the time, it was the farthest planet ever discovered, and although that record has long been beaten, we haven’t really learned all that much about it. Even its Wikipedia entry is a mere paragraph with links to a few studies presenting its discovery.

OGLE-TR-56b is also a Hot Jupiter, with an estimated surface temperature of 2000 degrees Celsius, which is hot enough to form clouds made of iron atoms. We have no direct information to confirm this, although astronomers reported evidence for iron rain on brown dwarfs — so-called “failed stars”, objects too big to be a planet but too small to be a star.

Does it rain Methane on Titan?

Titan is the largest moon of Saturn. It is the only natural satellite known to have a dense atmosphere, and the only object other than Earth where clear evidence of stable bodies of surface liquid has been found. Titan has liquid seas made of hydrocarbon, lakes, mountains, fog, underground water oceans and yes, it does rain methane on Titan. In fact, Earth and Titan are the only worlds in the Solar System where liquid rains on a solid surface — through again, the rain is methane and not water.

Interestingly enough, in many ways, the weather on Titan is similar to that on Earth. The climate — including wind and rain –creates surface features similar to those of Earth, such as dunes, rivers, lakes, seas (probably of liquid methane and ethane), and even deltas. The same type of weather patterns present on Earth are also found on Titan, and Titan’s methane cycle is a good analogue to Earth’s water cycle, although at a much lower temperature.

Titan gets 100 times less solar radiation than Earth, so the average surface temperature is about −179 °C. At this temperature water ice has an extremely low vapor pressure, so the atmosphere is nearly free of water vapor. However, the methane in the atmosphere causes a substantial greenhouse effect which keeps the surface of Titan at a much higher temperature than would happen otherwise.

The terrain on Titan is likely not made up of small grains of silicates like the sand on Earth, but rather might have formed when liquid methane rained and eroded the ice bedrock, possibly in the form of flash floods. The satellite even has dunes, much like Earth’s own deserts.

Clouds typically cover 1% of Titan’s disk, though outburst events have been observed in which the cloud cover rapidly expands to as much as 8%. The weather on Titan is dominated by Saturn; it was summer in Titan’s southern hemisphere until 2010, when Saturn’s orbit, which governs Titan’s motion, moved Titan’s northern hemisphere into the sunlight.

Verdict: It does rain methane on Titan.

Rubies and sapphires on HAT-P-7b

Are diamonds just not enough for you? Signs of powerful changing winds have been detected on a planet 16 times larger than Earth called HAT-P-7b, but that’s hardly the most impressive thing about this planet. Although it’s hard to confirm this, astronomers believe that the clouds on this planet would be made of corundum — a crystalline form of aluminium oxide which forms rubies and sapphires.

While such a sight would no doubt be visually stunning, it’s also a hellish place to be. Aside from these unusual clouds, HAT-P-7b remains very important as the first detection of weather on a gas giant planet outside the solar system.

Verdict: We’re not sure, but it might rain rubies and sapphires HAT-P-7b.

The universe is a big and wild place, and we’re only barely starting to scratch its surface. While it may rain water on Earth, that’s not the rule by any any means — on many different planets, it can rain many different things. Who knows what we’ll discover in the future?