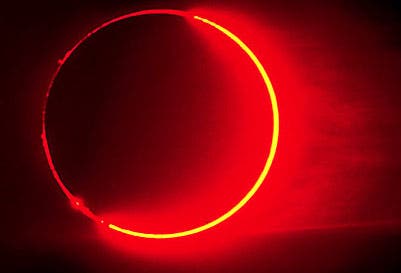 There’s a lot going on today, besides rabid shopping sprees. This Friday (Nov. 24), a partial solar eclipse will occur above the Earth’s southern hemisphere, a delight for residents lucky enough to cross its path, albeit quite small in numbers. This is the forth time the moon will block the sun in a spectacle of dark and light this year, after previous partial eclipses around the world in some parts of Europe, Alaska and Canada and Antarctica, respectively.

Penguins will have another reason to rejoice, as today yet another partial eclipse will cover the sun, most visible   at a point in the Bellingshausen Sea along the west side of the Antarctic Peninsula. As far as humans are concerned, besides the handful of scientists staged in the arctic continent, South African residents will also be lucky enough to witness the spectacle, in the southern and western portion of the country, as well as Tasmania, and most of New Zealand.

Tonight, close to 90% of the sun’s disk will be covered over by the moon, the most close to a complete eclipse then any other event this year. The eclipse will begin at 9.53 a.m and end at 1.47 p.m, local time, and the whole event will last around four hours.

The next solar eclipse visible to a decently sized populace of the world will be on May 20, 2012. Expected to be a stunning event, it will be visible from China, Japan and parts of the United States.

Local eclipse times for November 25, 2011 in the Southern hemisphere on Earth.