UC Davis wants to remove this picture from the internet

That's not how the internet should work...

The Californian University is trying to cover up the awful mess it made in 2011 during the Occupy movement. 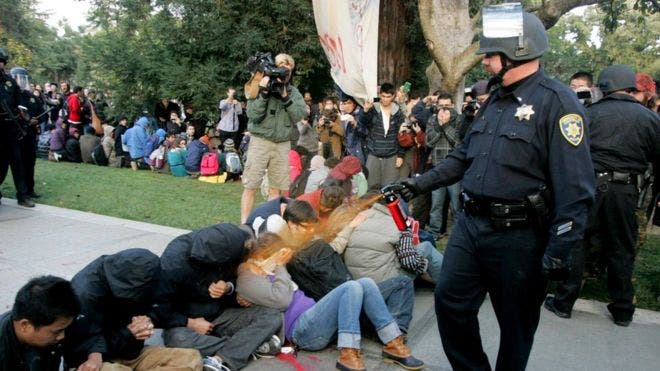 In 2011, a police officer pepper-sprayed students protesting at UC Davis, California. He did this at close range, cynically, with no regard for what he was doing. The students were protesting peacefully, without any incidents, and the act was fully backed by the University’s leadership. Chancellor Linda Katehi said she was “deeply saddened” by the event and took “full responsibility for the incident” but absolutely refused to resign, despite massive pressure from both students and professors.

The resulting photos and videos were viewed tens of millions of times, making news all over the world. Now, she wants to eliminate the pictures (and others like it) from search results, and eliminate as many mentions as possible of herself and this entire situation, paying a company at least $175.000 for it. The expenses will be paid by the university’s communications office, which had its yearly budget increased from $3m in 2009 to $5.5m in 2015.

“It is troubling that the administration chose to spend scarce public dollars and to nearly double its PR budget when tuition soared, course offerings were slashed and California resident students were being shut out,” said Assemblyman Kevin McCarty, who chairs the Assembly Budget Subcommittee on Education Finance. “These findings just raise more questions about university priorities.”

Not only are they trying to remove negative content about them, but they also want to introduce a “surge of content with positive sentiment and off-topic subject matter” about the university. They plan to do this mostly by manipulating search results, so that when you Google “UC Davis Occupy” or “UC Davis pepper spray” you get other results. Needless to say, this is immoral and defiant in the same way the original situation was.

Speaking to the Sacramento Bee and perfectly exhibiting the university’s leadership hypocrisy, spokeswoman Dana Topousis said: “We have worked to ensure that the reputation of the university, which the chancellor leads, is fairly portrayed.”

I thoroughly enjoy the fact that their campaign is already backfiring, with numerous media outlets already writing about this incident. It’s the Streissand effect coming in at full force.