by Mihai Andrei
in Animals, Offbeat
Reading Time: 4 mins read
A A
Share on FacebookShare on TwitterSubmit to Reddit

You wouldn’t expect a dog and a turtle to be best friends, but as we’ve learned on the Internet, the animal kingdom can create some surprising friendship relationships. 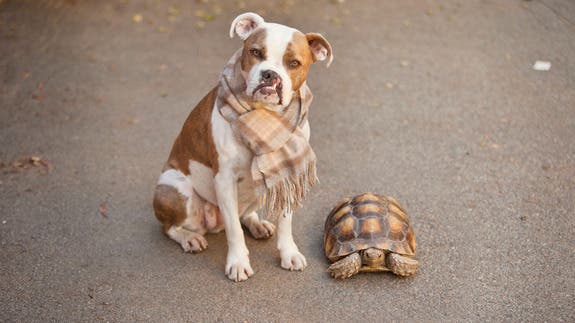 It all started when Christine Hilberg, a 29-year-old photography retoucher and animal Instagrammer rescued Puka, a 4-year-old mixed breed with a cleft lip from a homeless man in Los Angeles. She wanted to help her – and she did.

“She (Roxy) pulled her car over, worried that Puka may need medical attention due to her cleft lip, bartered with the homeless man and drove home,” Hilberg told Mashable. Roxy, already the proud owner of a few rescue animals, gave Puka to Hilberg, and they “have been inseparable ever since.”

Puka made a swift recovery, and now, her cleft lip is only cosmetic and doesn’t cause her any discomfort – it even makes her any cuter. As for the turtle, Rocket Larry, an African Sulcata tortoise was adopted via Craigslist. Nowadays, he spends his time chowing down on veggies, strawberries, and of course, with his new best friend Puka.

What I like about this story is that after the dynamic duo got a lot of internet attention and love, Hilberg has put this newfound fame to good use, advocating animal adoption.

“I use my Instagram account to share the perks of having a strong relationship with an animal, to help further the cause for rescuing animals and spread awareness for animal adoption. “

It’s a great reminder that you should adopt an animal and not buy one – you’ll be likely saving a life. Around 2.7 million adoptable dogs and cats are euthanized each year in the United States alone simply because too many people give up their pets and don’t want to adopt.

“Growing up, my family adopted all of our animals from friends, shelters or off the streets,” Hilberg says. “Shelters all over the country are flooded with animals needing a second chance.”

Oh, and as for Puka and Larry? They don’t really care about their internet fame – they just want to relax and enjoy each other’s company.