by livia rusu
in News, Offbeat
A A

If you’ve ever cycled in a hilly area, then you know what a problem it can be – especially if it’s an urban area; also, for older people, or people with mild cardiac issues but who still practice light cycling, it can be quite dangerous. Norway has come up with a solution to that issue – they’ve developed the world’s first bike escalator.

Cycling is wonderful – it’s healthy, it’s environmentally friendly, and especially in crowded cities, it can be just as fast as driving. But no one really likes riding a bike uphill, and of course, there are plenty of hills in Norwegian cities, so authorities implemented a creative solution in Trondheim, one of the biggest cities in the country. 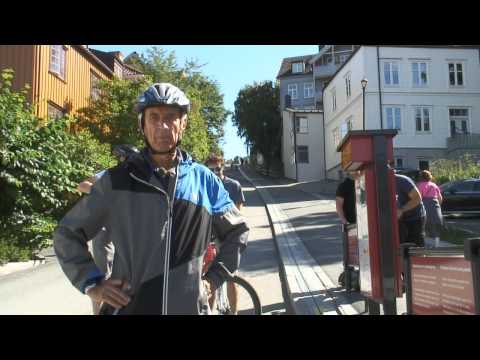 To use the escalator, a cyclist rides up to the station at the bottom and places her right foot on a small footplate sticking up from the slot running along the curb. The plate then just carries you up the hill, and you don’t have to do anything. The device can be used by six people simultaneously.

The technology used to create the bike escalator is very similar to a ski lift. Most of the design elements are located just beneath the ground, which means that there is nothing to distract or disturb the rider or anyone walking on the street. Trampe is the world’s first and as far as I could find, only bicycle escalator. In 2013 it was refurbished by a French cable-supported transport company named SKIRAIL and rebranded as a CycloCable.

The company says it is optimistic about its future and we should expect to see this technology implemented in many other areas in Europe. It comes at a hefty price though – one meter comes in at about $2,000-3,000, so if you want this in your city, you’re going to have to show it’s going to be useful.