Take a long walk down these dark corridors of history.

by Mihai Andrei
in Offbeat
Reading Time: 6 mins read
A A
Share on FacebookShare on TwitterSubmit to Reddit

You could learn the witches’ way to dealing with toothaches, wounds, and cheating at dice — while also helping scientists.

Two people in 1600s England — presumably witches — handwrote a book of charms (or more). We don’t know what happened to them or how the books survived the anti-witch persecution that rampaged through Europe, but the books did survive. The independent Newberry Library has re-discovered them and has started work on translating them. The problem is, there’s a lot of painstaking work, so they’re calling on citizens to chip in and help with the translation.

The Book of Magical Charms, The Commonplace Book and Cases of Conscience Concerning Witchcraft have already been scanned and uploaded to the Newberry Library’s “Transcribing Faith” portal and some people have already started work. You don’t need to have any special skills, just a lot of curiosity — and some patience.

“You don’t need a Ph.D to transcribe,” Christopher Fletcher, coordinator of the project and a fellow of the Andrew W. Mellon Foundation, tells Smithsonian.com. “[The initiative] is a great way to allow the general public to engage with these materials in a way that they probably wouldn’t have otherwise.”

Of course, this isn’t exactly a piece of cake. This is archaically spelled English and Latin handwriting, often accompanied by mystifying drawings which make it extra hard to read. But if you get through it, you’ll not only help historians add depth to our understanding of 17th-century society but also learn a spell or two.

Spells and Charms — with recipes

The manuscripts hold many bizarre, even frightening methods, promising to bring great power to the user. It’s an interesting mixture of occult arts and religion, all mixing Latin and English. Here are some of the bits that have already been translated, though we definitely don’t recommend following them: 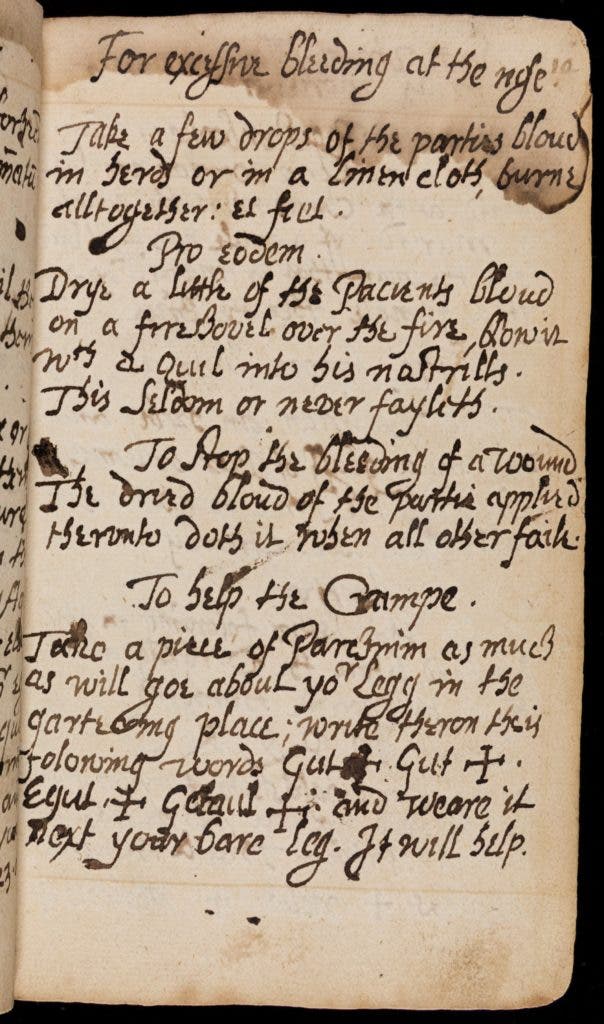 For excessive bleeding at the nose.
Take a few drops of the parties bloud
in herds or in a linen cloth, burne
alltogether: Et fecit. [and it is done]

Pro eodem [for the same]
Drye a little of the Pacients bloud
on a fireshovel over the fire, blow it
with a Quil into his nostrills.
This seldom or never fayleth.

To stop the bleeding of a wound.
the dried bloud of the partie applied
therunto doth it when all other faile.

To help the Crampe.
Take a piece of Parchemint as much
as will goe about your legg in the
gartering place; write theron theis
folowing words Gut + Gut +
Egul + Getaul + and weare it
next your bare leg. It will help. 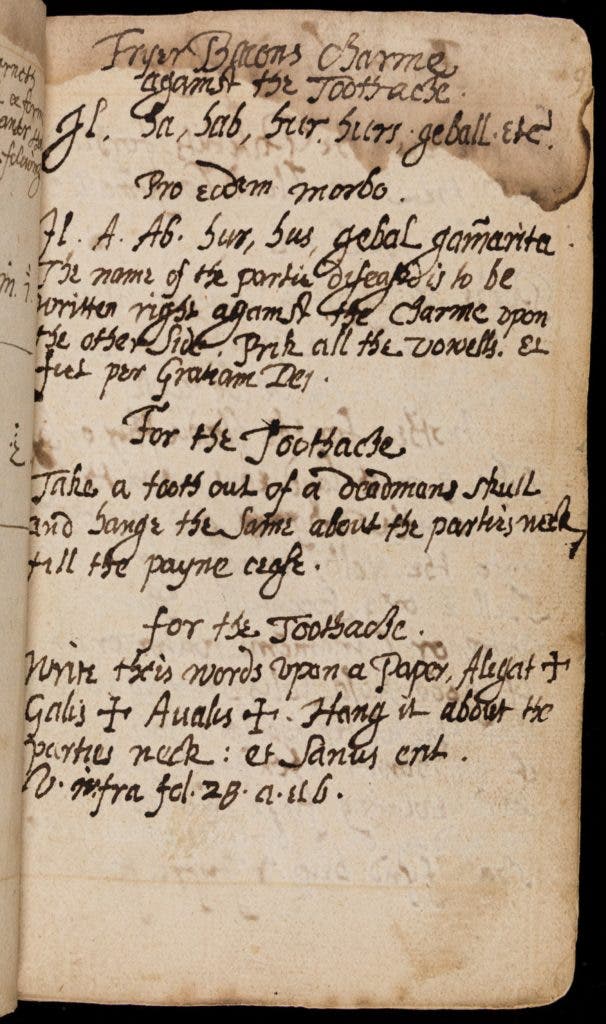 Fl. A. Ab. hur, hus, gebal gamarita
The name of the partie diseased is to be
written right against the Charme upon
the other Side. Prik all the vowells. Et
fiet per Gratiam Dei. [and let it happen by the grace of God]

For the Toothache
Take a tooth out of a deadmans skull
and hange the same about the partie’s neck,
till the payne cease.

for the Toothache.
Write theis words upon a Paper. Aligat [cross]
Galis [cross] Aualis [cross]. Hang it about the
parties neck: et Sanus erit. [and it will be healthy] 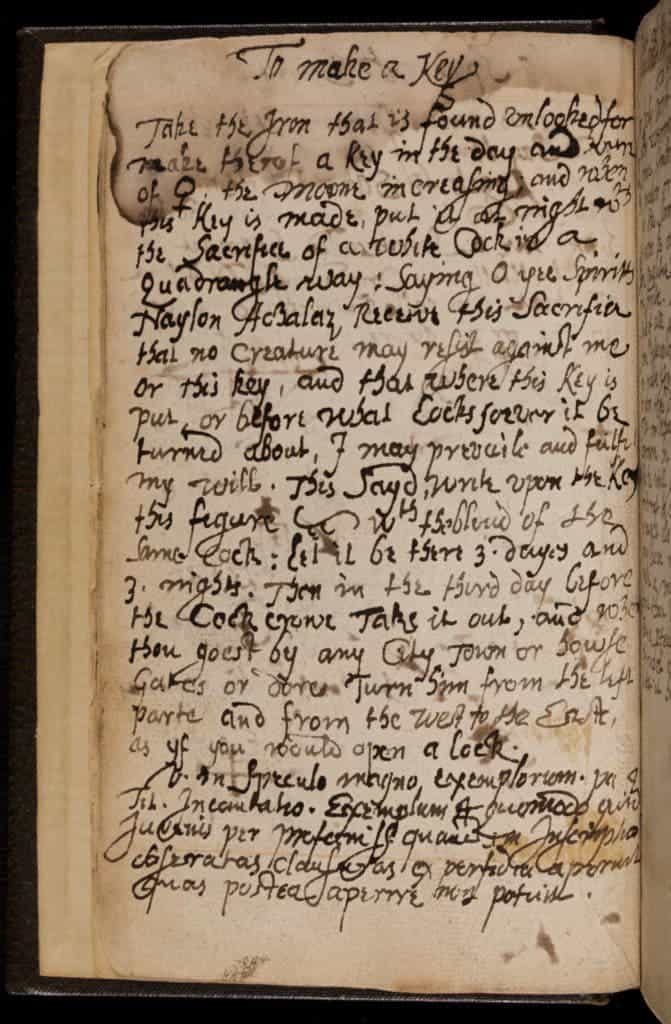 To make a Key
Take the Iron that is found unlooked for
make therof a key in the day and hour
of Venus the moon increasing; and when
the Key is made, put it at night wth
the Sacrifice of a white Cock in a
quadrangle way : Saying O Yee Spiritts
Naylon Achalaz, Receive this Sacrifice
that no Creature may resist against me
or this key, and that where this key is
put, or before what locks soever it be
turned about, I may prevaile and fulfil
my will. This sayd, write upon the Key
this figure [Image: ~ with two lines attached to the bottom as if it were a “F” where the prongs are facing downward] wth the bloud of the
same cock: Let it be there 3 dayes and
3 nights. Then in the third day before
the Cock crowe Take it out, and when
thou goest by any City Town or howse
Gates or dore Turn him from the left
parte and from the West to the East,
as yf you would open a lock,
[_____] Speculo magno exemplorum • [??] [Z?] Tih. Incamlaho. Exemplum [?] guomodo g[???] Juvanis yer prefermi IS quani[??]m Insemoho soferaras claus[??]as ex perfora apern[??] [snas?] postea aperr[?]e m[?] pofuis .

To speak with spirits 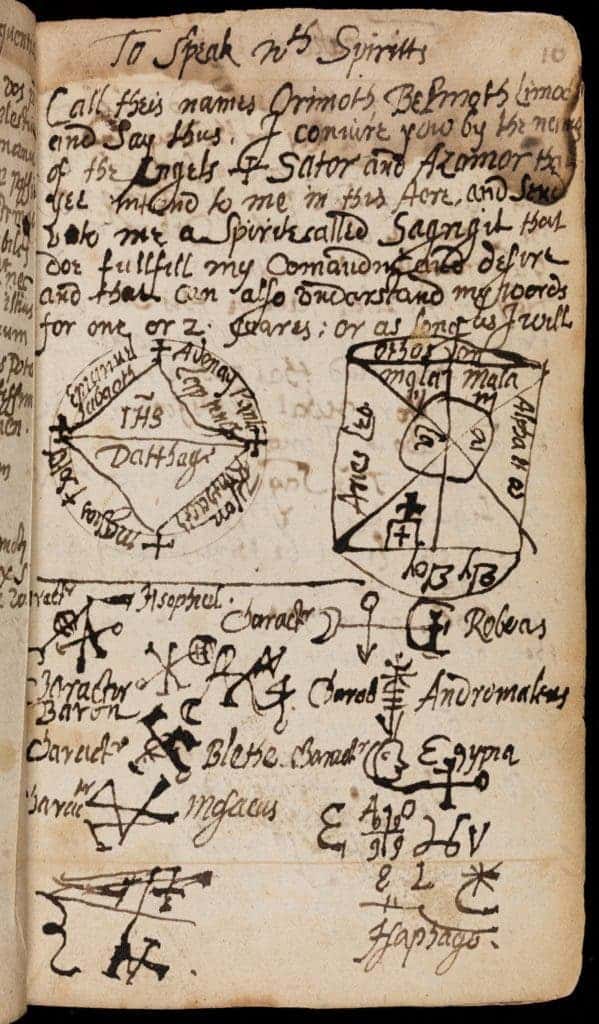 To Speak with Spirits
Call their names Orimoth, Belmoth Lymocke
and Say thus. I conjure you by the names
of the Angels + Sator and Azamor that
yee intend to me in this Aore, and send
unto me a Spirit called Sagrigit that
does fulfill my comanding and desire
and that can also understand my words
for one or 2 yeares [?]; or as long as I will.

These are just some of the wondrous incantations and recipes presented in the book.

Newberry brought the books to light as part of a multidisciplinary project titled Religious Change: 1450-1700, exploring the relationship between books and religion — as you can imagine, there’s a lot of friction (to put it lightly). Consequently, not all books are witches incantations. Cases of Conscience tells the story of a Puritan leader involved in the Salem Witch Trials, contemplating the ethics of hanging witches.

It’s a fascinating journey, travelling down these old, forgotten corridors of history. The hatred and propaganda against alleged witches smeared history so much that it’s almost impossible to know what’s real and what’s not. The spells may not work, but people believed in them, and people were killed for these beliefs (or even just unfounded suspicions). At the very least, we owe it to them to try and understand what they really stood for.