A worthy recognition for one of the world's greatest scientists.

The mathematician cracked the Nazi Enigma code and is widely credited as the father of computer science — but he was persecuted for his homosexuality. He will now be featured on the £50 note. 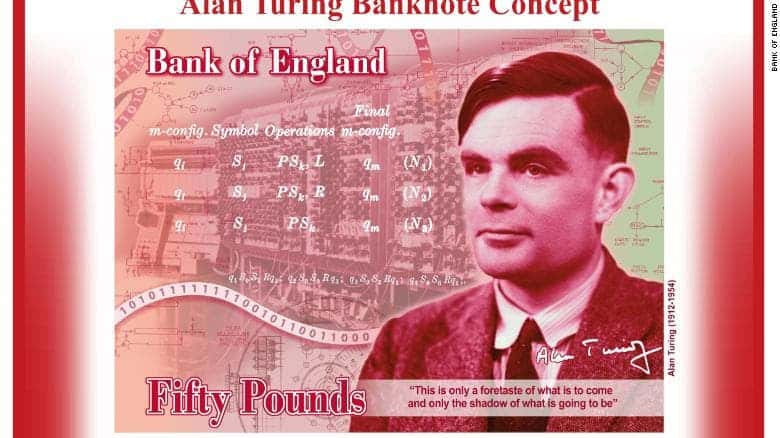 The UK continues its tradition of featuring scientists on banknotes. After Charles Darwin was featured on the £10 from 2000 to 2018, now Alan Turing will feature on the £50 note (the equivalent of approximately $62).

The announcement was made by the Bank of England governor, Mark Carney, at the Science and Industry Museum in Manchester. Turing was selected from a list of around 1,000 scientists, to celebrate his role in World War II, his pivotal work in computational science, as well as the impact of his homosexuality persecution. Carney commented:

“Alan Turing was an outstanding mathematician whose work has had an enormous impact on how we live today. As the father of computer science and artificial intelligence, as well as [a] war hero, Alan Turing’s contributions were far ranging and path breaking. Turing is a giant on whose shoulders so many now stand.”

Alan Turing was a British scientist and a pioneer in computer science. He laid the groundwork for modern computing and produced important theories about artificial intelligence. The Turing test, developed in 1950, is still a landmark test to assess a machine’s ability to exhibit intelligent behavior indistinguishable to that of a human. During World War II, his work was instrumental in breaking the German Enigma code.

But Turing’s life took a turn for the worst when he was prosecuted for his sexual orientation. Turing was prosecuted in 1952 for homosexual acts and had to choose whether to go to prison or accept chemical castration. He opted for the latter, which caused dramatic health consequences, including causing breast tissue to form. At the time, Turing wrote that “no doubt I shall emerge from it all a different man, but quite who I’ve not found out.”

Due to intense distress caused by this, Turing committed suicide two years after the “treatment”. Despite his immense contributions to society, his life ended in utter misery.

“He set the foundations for work on artificial intelligence by considering the question of whether machines could think,” the Bank said. “Turing was homosexual and was posthumously pardoned by the Queen, having been convicted of gross indecency for his relationship with a man. His legacy continues to have an impact on both science and society today.”

Turing’s face will appear on the new £50 polymer note starting in 2021.