Jupiter is still a ridiculously beautiful place judging from Juno’s pics, and here’s how it does it

A dash of chemistry, a stroke of physics, all mixed in with behemothian mass.

NASA released a new batch of stunning images of Jupiter for Earthlings to enjoy, via its Juno spacecraft, so let’s take a look at how these ephemeral landscapes form. 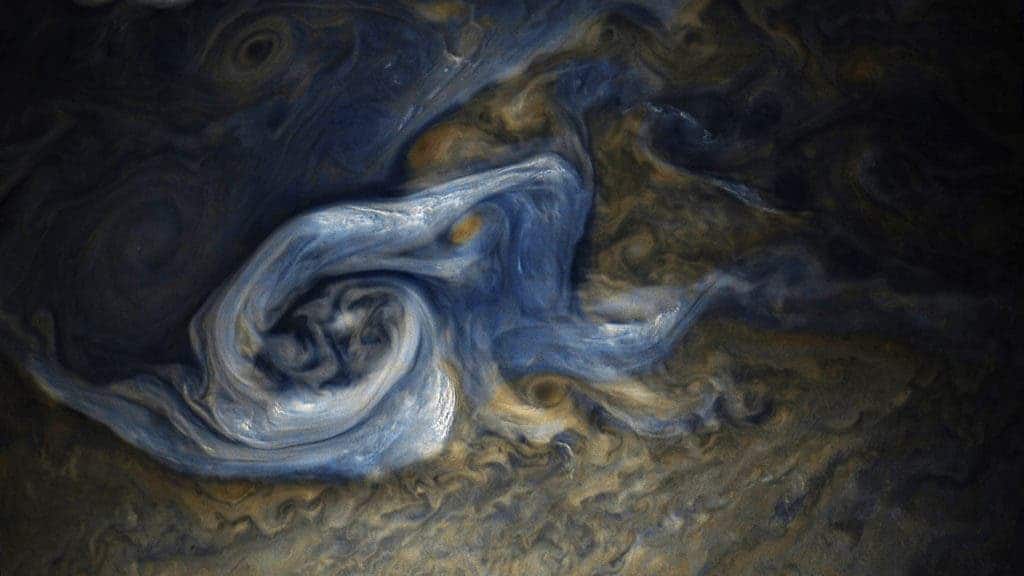 Back on August 5th, 2011, NASA launched a probe to peer into the secrets of Jupiter. Christened Juno, after the mythological goddess wife of Jupiter in the ancient Roman pantheon, the vessel was equipped with a wide range of instruments aimed at teasing away every last secret of the gas giant’s characteristics, including its atmosphere, magnetic force field, and dense cloud coverage. Which goes to show that even scientists enjoy a nice turn of irony now and again.

Luckily for us, NASA also slapped a high-quality camera onto Juno, which it used to capture the giant’s stunningly beautiful masses of swirling gas. And a new series of such high-fidelity, close-up photos was just recently released by NASA. Aren’t we spoiled?

So let’s sit back and enjoy the sky god’s mastery with the cloud brush while taking a look at how he does it. 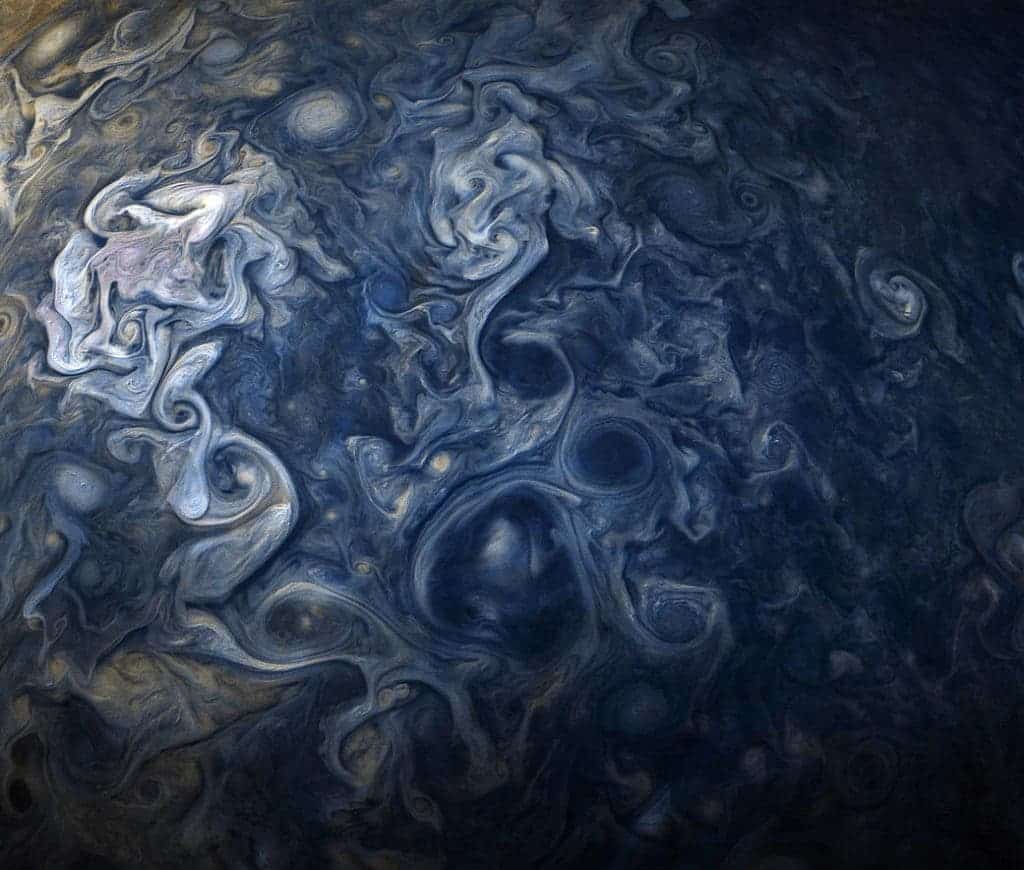 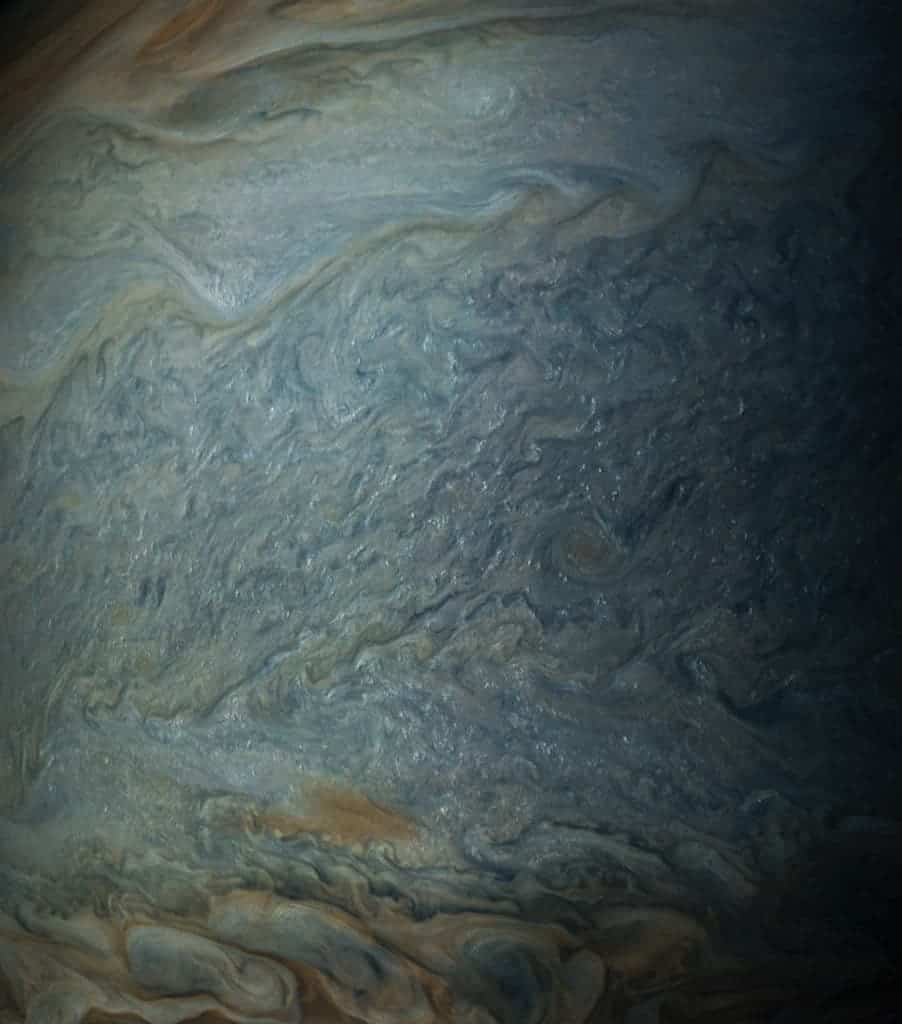 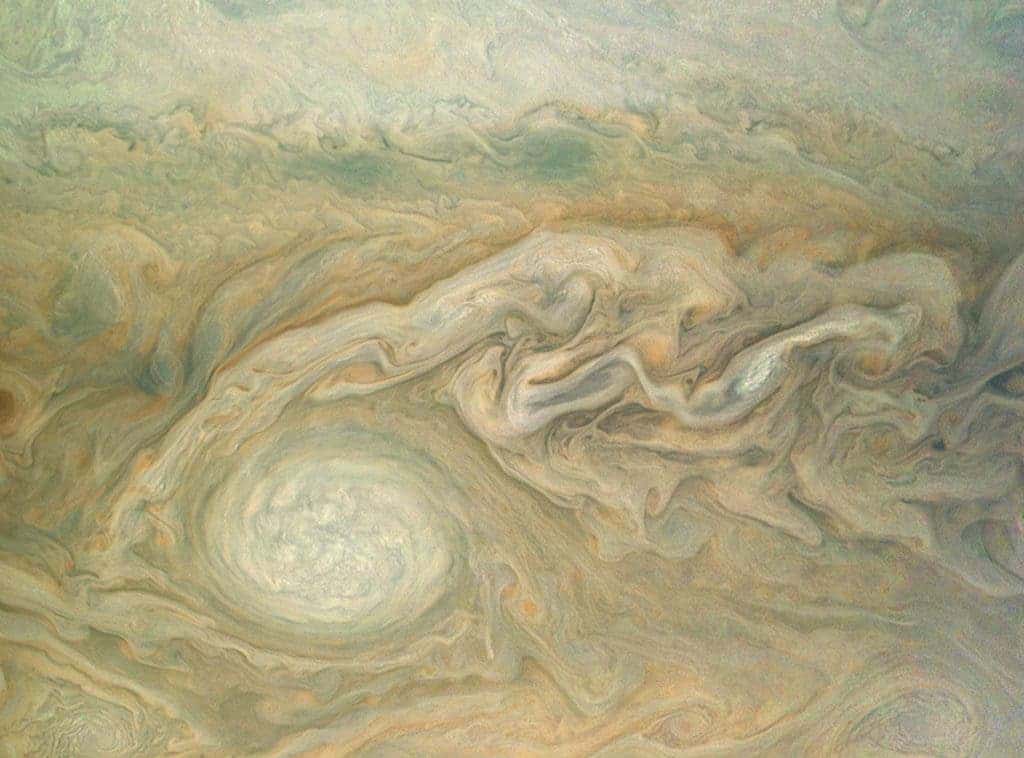 Wow, it looks so fluid!

That’s because it is. Jupiter is, essentially, one huge atmosphere.

Its main ingredient is hydrogen, which is also the bulk material in the sun. Hydrogen accounts for around 90% of the Jovian atmosphere, with almost all of the remaining 10% being composed of helium (by volume). By mass, its around 75% hydrogen and 24% helium.

What’s left are compounds such as ammonia, sulfur, methane, and water vapor, along silicon-based compounds and traces of benzene and other hydrocarbons. Carbon, hydrogen sulfide, neon, oxygen, and phosphine also float around in there.

We don’t know whether it has any ‘dry land’, so to speak, although scientists suspect that below a 50 km (30 miles) thick cover of gas lies a 21,000 km (13,000 miles) thick layer of hydrogen and helium. Pressed by the crushing weight of all that ‘atmosphere’ above, this layer goes from gas to liquid the further down you delve. Magnetic field recordings beamed back by Juno also suggest that Jupiter has a solid core generating its magnetic field — but even this is an exotic substance known as metallic hydrogen.

So in effect, the gas giant has only a tiny kernel we’d call firm, but even that isn’t a traditional ‘firm’ as in the case of rocks or soil. It’s a gas pressed so ungodly hard that it became metal. The giant is composed almost entirely of hydrogen and helium, a property that extends to its liquid and solid components. 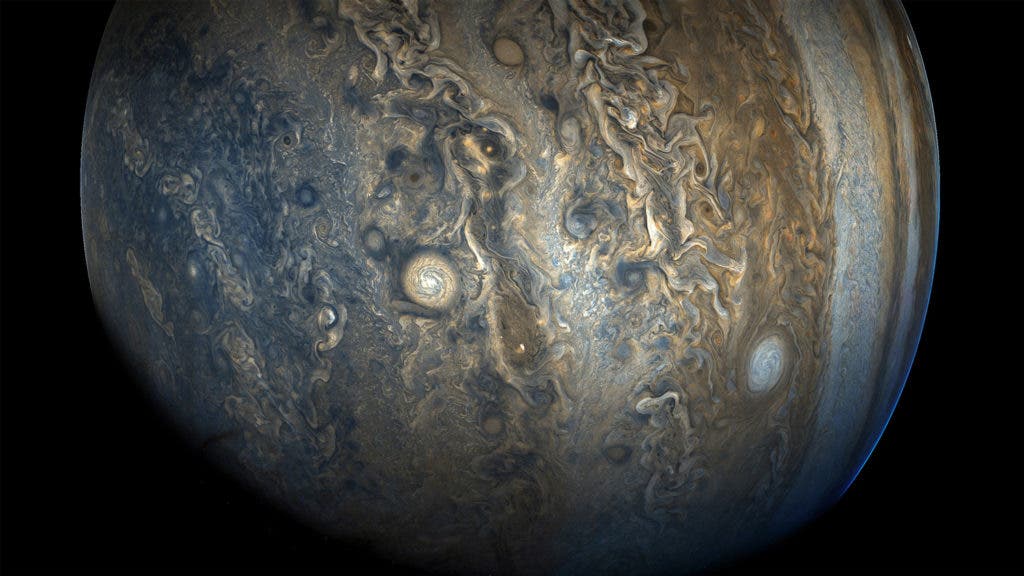 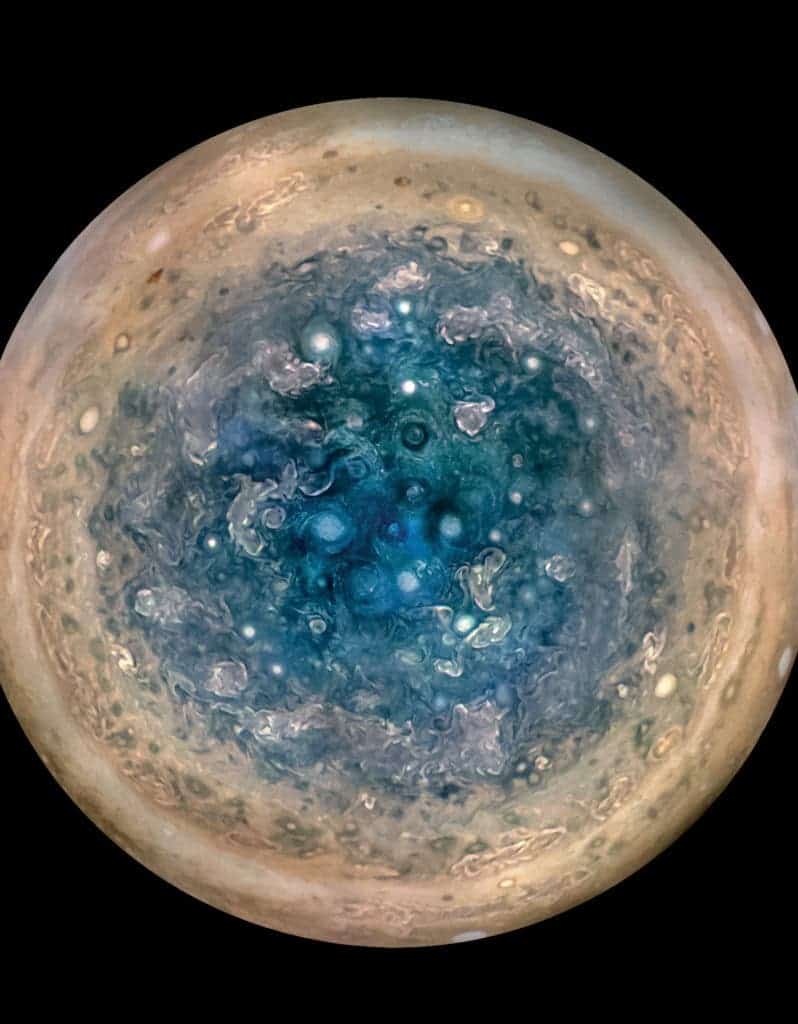 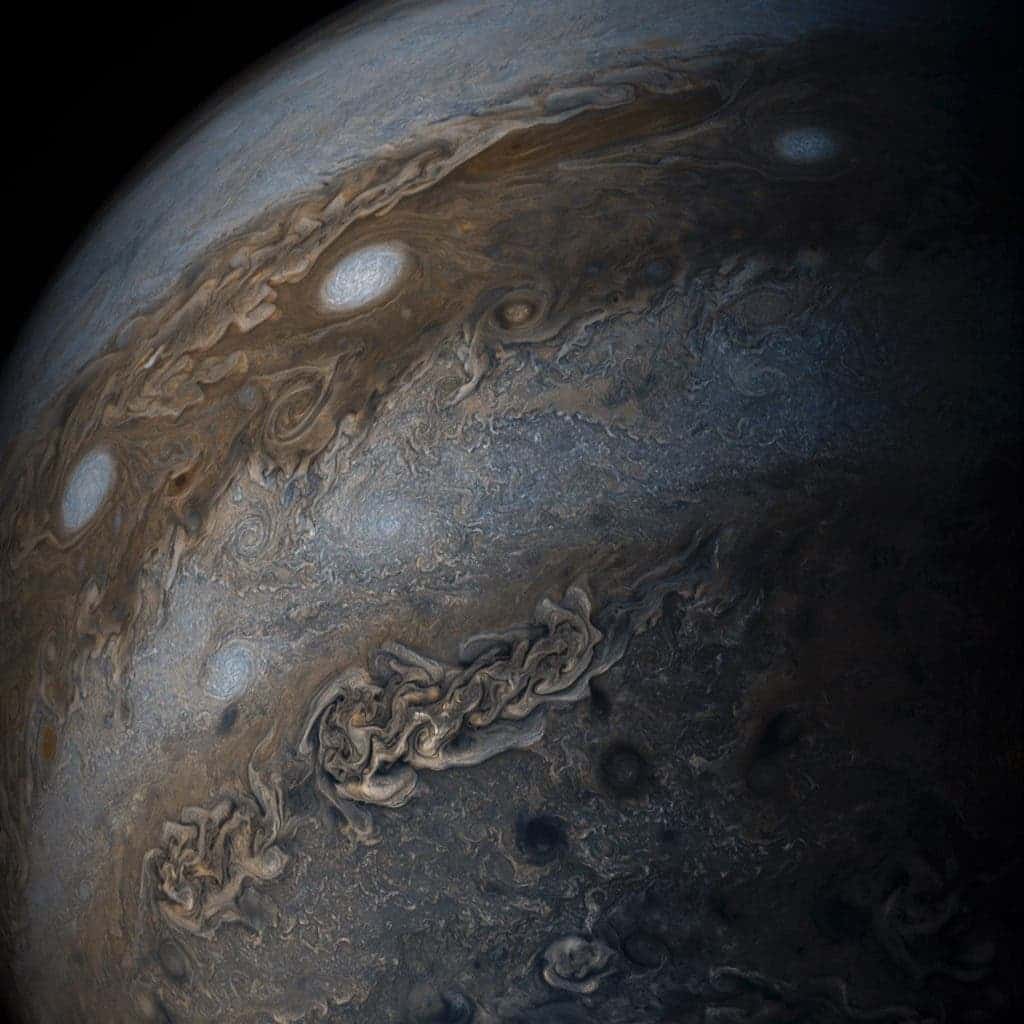 The colors are primarily a function of chemistry. Jupiter’s outer atmosphere consists mostly of hydrogen and helium with small amounts of water droplets, ice crystals, ammonia crystals, and other elements at the same pressure as Earth’s atmosphere — 1 bar. These elements create clouds in shades of white, orange, brown, and red.

The origins of the other colors are easiest to tease out by judging from the other gas giants. Yellow-brown Saturn’s atmosphere has traces of ammonia, phosphine, water vapor, and hydrocarbons. Uranus gets its green-blue hue from the methane gas mixed into its hydrogen- and helium-rich atmosphere. Neptune, also rich in methane with a predominantly hydrogen- and helium-based atmosphere, is an even truer shade of blue.

The swirling patterns are produced by the relative movement of these gasses throughout the atmosphere, goaded on by insane windspeeds of up to 384 miles per hour. The round spots, some of which could fit the entire Earth with room to spare, are immense and immensely violent storms. 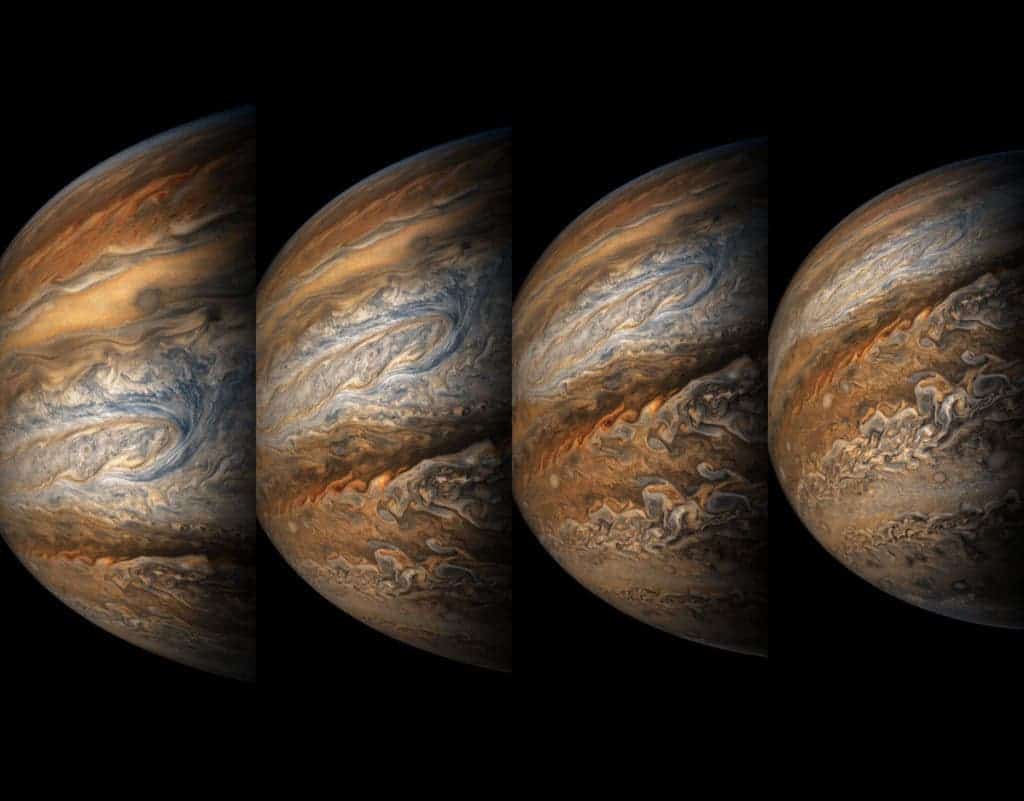 The US$ 1 million craft entered Jupiter’s orbit in 2016. The data it beamed back proved invaluable in our efforts to understand the origin and evolution of the gas giant, look for a solid planetary core, map its magnetic field, measure water and ammonia levels in its deep atmosphere, and for the observation of its auroras. Juno is currently swinging around Jupiter in a wide arc to keep safe from its monumental outpouring of radiation, which could fry the vessel’s electronics.

Back in October, NASA planned to fire Juno’s thrusters to increase its speed but had to cancel such plans due to an unforeseen malfunction of its engine valves. Juno will have to more lazily swing around the object of her interest, which means more time to snap quality pictures — and I’m all for that. Even more so since Jupiter’s fluid nature means that its surface is never the same, not even mere moments apart.

This series of close-ups were taken within the last year and can be seen on Juno’s mission page (hosted by NASA), along with others taken previously. You can also submit your own processed images from Juno’s raw image files, or view those submitted by others.

All image credits go to NASA.