This hand-woven computer sent astronauts to the Moon

This is the Apollo Guidance Computer's read-only rope memory. That's right -- memory literally made from hand-woven rope. Depending on how the rope was knit, a software program could be initiated. 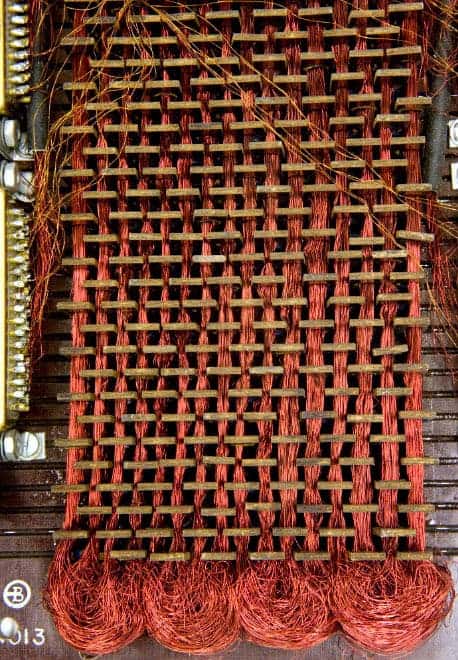 This is the Apollo Guidance Computer’s read-only rope memory. That’s right — memory literally made from rope. Depending on how the rope was knit, a software program could be initiated.

It’s still binary programming, but the entire process was extremely laborious and slow. It could take months to weave an entire program. If a wire went through one of the circular cores, it was a binary one, if it went outside of them, it was a binary zero. It seems hard to even imagine this, but at the time, this was a great breakthrough. This was the equivalent of 72 KB of storage, which was almost 20 times higher data-per-volume than existing alternatives.

As for the Apollo Guidance Computers (AGC), they provided computation and electronic interfaces for guidance, navigation, and control of the spacecraft – as much as the day’s technology permitted it. Astronauts communicated with the AGC using a numeric display and keyboard called the DSKY (DiSplay&KeYboard, pronounced ‘DISS-key’), the whole technology being developed by MIT engineers. Another significant development is the fact that AGCs were the first computers to use integrated circuits.