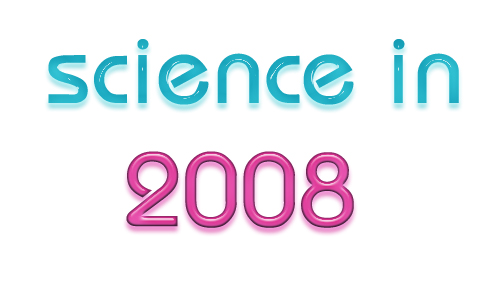 Probably 2008 will remain in history as the year of the economic crisis, or perhaps of the LHC, or perhaps the year we landed on Mars… either way, it was a year filled with many problems, and many achievements; the achievements were mostly scientific, while the problems could find their solution… in the same field. After all, the president elect Barack Obama said the solutions will be green. But until we see what the future holds for us, let’s take a look of the past year; here’s science in 2008 (in a random order).

The pollution crisis in China seemed just one of many problems that clouded this year’s olympics; many journalists complained that they weren’t able to write about what they wanted to write, but still, we managed to find out something that news channels didn’t show. Basically, pretty much everything people feared would happen, happened. The water wasn’t safe to drink due to the high level of contamination in water pipes, the coal mines haven’t been shut down (which is hard to say it’s their fault, because it’s almost impossible to actually keep track of what’s happening there), and the air wasn’t as polluted as some claimed, but it wasn’t as clean as most hoped… oh well! All’s well that ends well, and we wouldn’t even have mentioned this, hadn’t it been for China’s bragging about their technological and environmental achievements.

It was definitely a tough year for NASA, with oh so many problems, topping it all with the Hubble issue. They needed Phoenix to be a success so bad, and there was a whole lot of work put into it, because the expectations were so high. But no matter how high the expectations were… they were fulfilled! The Phoenix Mars Lander dived through the fiery arms of the Red Planet and gathered so much information, providing hints that water and ice may have existed on Mars. The planet that inspired so many writers and scientists began to show its secrets.

Everybody’s money was on what will the Large Hadron Collider reveal, and they were all gambling on a god particle: the Higgs boson. This “elusive” particle could provide the answers that masless photons have been hiding for so long. But it’s still uncertain what the largest particle in the world will point out.
Some believe it will reveal dark matter; this matter hasn’t been found yet, but its presence can be inferred from the gravitational effects applied to visible matter. Mini black holes are another option; though the odds for this are way smaller than the previous two, some scientists still believe this could happen. From this, it just goes wild; everything from super symmetry (the theory that every particle comes in a pair) to extra dimensions and parallel universes (for which the odds have been estimated to be 1 in a gogol). Howerver, we still have to wait, because due to a serious fault between two superconducting bending magnets all experiments have been haulted and delayed until the summer of 2009.

TC3 was medium sized meteor, of about 2 to 5 meters in diameter, that entered Earth’s atmoshpere October 7, 2008, at 02:46 UTC (5:46 a.m. local time) and burned up before it reached the ground. Well, meteors, albeit a lot smaller, hit Earth every day, but what made this one so special was the fact that it’s the first such body to be observed from the moment it was observed (1 day prior to its immersion), until it’s impact. In total, 586 astrometric and almost as many photometric observations were performed by 27 amateur and professional observers in less than 19 hours and reported to the Minor Planet Center, which issued 25 Minor Planet Electronic Circulars with new orbit solutions in eleven hours as observations poured in.

The meteor exploded tens of kilometers above the ground, somewhere in a low populated zone of Sudan, with the energy of 0.9 to 2.1 kilotons of TNT, causing a large fireball in the early morning sky. The meteor’s “light was so intense that it lit up the sky like a full moon and an airliner 1,400 km (870 miles) away reported seeing the bright flash,” reports The Times.

MESSENGER (short for MErcury Surface, Space ENvironment, GEochemistry and Ranging) is a probe sent in orbit by NASA on August 3, 2004, so we can find out more about the enygmatic dwarf planet of Mercury, the closest planet to the sun and the least-explored rocky planet in the solar system.

This year, the MESSENGER probe executed two flybies around Mercury’s orbit, on 14 January 2008 (closest approach 200 km above surface of Mercury at 19:04:39 UTC), followed by a second flyby on October 6, 2008. MESSENGER will execute one last flyby on September 29, 2009, to further slow down the spacecraft. Mercury orbit insertion will be on March 18, 2011, beginning a year-long orbital mission.

The feat requires a huge amount of energy, careful trajectory planning, and strong radiation and temperature shielding. And once Messengerarrives, scientists will have much to explore. One critical puzzle: Why is diminutive Mercury made of the densest material in the solar system? The answer should shed light on how the rest of the solar system formed and evolved.

That’s just a small part of the magnificent things that the science world accomplished in the year that is passing. Unfortunately, it would take more than several hundred pages to write about them, and time is pressing us. So, we hope we haven’t been writing in vain and you take pleasure in reading us. So, the team at ZME Science wishes you a