How to find constellations: a starter’s guide

You'll never know what's written in the stars for you if you can't read them.

Until the advent of map-making and global positioning technologies — from the simple compass all the way to the pinpoint accuracy of modern GPS systems — constellations have (literally) been the guiding star for people the world over. As the night sky was for all intents and purposes identical from any point they would travel to, learning to identify stars and constellations was a very good way for our ancestors to orient themselves.

Today, it’s a dying art — between light pollution killing our view of the stars and the convenience of the methods we have now, knowing the groups of stars has become more of a quirk than a need. But that makes it no less awesome of a skill.

Maybe you just have a passion for astronomy, or just looking for a fun way to pass the time. Perhaps you’re planning a camping trip and would like to show off to your friends around the tent, or maybe, just maybe, you’re planning to woo that special someone in an unexpected way — if you want to know your way around the night’s sky, here are the basics.

Depending on your location and the time of year, different stars will be visible. There are a lot of different resources online which can help you identify the position and shapes of constellations. If you don’t have a veteran stargazer on hand to show you the ropes, a star map can help you locate each constellation.

Google Sky lets you practice from the convenience of your PC. AstroViewer is another good place to start. The site will create a customized star map based on your location to help get you going. You can also download their interactive sky map for reference if you don’t have an internet access. Other services like Starmap, which is also available as an iOS app, can turn your smartphone into a constellation reference guide. Alternatively, you can download their maps as PDFs and print them for later use.

Beyond knowing what to look for, you’ll  have to be able to actually see some stars. You should try to get as far away from cities as possible since ambient light will blot them out. Pack a binocular or telescope so you can see fainter stars and other features that you wouldn’t pick up with the naked eye.

Finally, try to get into the habit of orienting yourself after the North Star (or Polaris). It’s roughly aligned to the Earth’s rotational axis, making it pretty consistent in its position on the sky — and having a firm point of reference will help you navigate easier. So let’s start with that one.

Note: the “best seen” dates are rough guidelines, as most constellations are visible for up to 6 months a year. The dates apply in the Northern Hemisphere.

Ursa Minor, the Little Bear, and the North Star

Ursa Minor (or the Little Dipper) is actually the first constellation I could distinguish in the sky. I had to, as my grandfather insisted it would help me find my way if I got lost. That’s because it houses the North Star, which marks the celestial north pole. 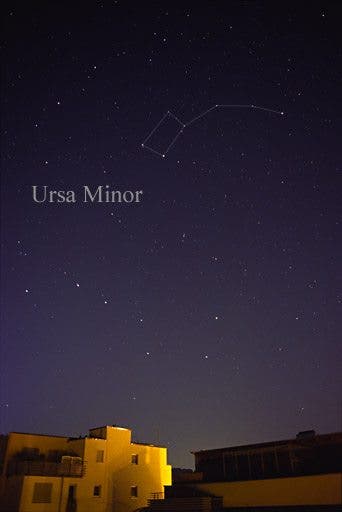 It’s a relatively small constellation on the sky and was named after its size and visualization as a baby bear — albeit, one with an unusually long tail, which ends with the North Star. In practice, what you’ll see is four stars in a box-like shape, with a three-star tail.

Its distinctive features are the strong curvature of the tail, the bright North Star on its end (this is the constellation’s Alpha, or most luminous, star), and Kochab, the second brightest (the Beta star) seen here in the lowest corner of the box. The four stars that make the Dipper are of second, third, fourth, and fifth magnitudes, making Ursa Minor an effective reference for estimating other stars’ luminosity.

The name comes from the story of Callisto. She was a beautiful young nymph who Zeus fell in love with. Naturally, his wife Hera wasn’t too big on the idea so she turned Callisto into a bear.

Callisto’s son Arcas would eventually run into the bear on a hunting trip and decide to kill the animal. Zeus intervenes, turns him into a bear cub (Ursa Minor), and places them both on the night’s sky.

Ursa Major is probably the most widely-recognized constellation in the Norther Hemisphere — because it’s almost always visible from this side of the Earth.

It’s sometimes named the Big Dipper, which technically speaking isn’t correct — the Dipper is just a part (an asterism) of Ursa Major. Still, it’s the most easily recognized part, it’s virtually always visible, it looks a lot like Ursa Minor, and it can help you find the North Star. So I’ll tell you how to spot the Big Dipper and you can find the rest of momma bear from there.

It’s most distinctive feature is the overall shape of the Dipper. You can differentiate it from Ursa Minor through the downward bend in the tail, its size, and the position of the brightest stars. Apart from my epic skills in Paint, the picture on the right shows how you can use the Beta Ursa Majoris and Alfa Ursa Majoris stars Merak and Dubhe (lower and upper right corners of the Big Dipper) to find the North Star.

It’s one of the biggest and oldest among named constellations. However, despite its size, the Aquarius doesn’t have any defining features. Its stars are also faint and relatively hard to see. Still, they’re not unrecognizable — you’ll just need to find a light-free area to spot this one in the sky.

The image you see on the left isn’t the whole constellation, but it’s probably what you’ll be able to see with the naked eye. One of Aquarius’ most striking features is the protruding line of stars starting from the top and going to the right, known as the “right arm.”

It takes the name from Greek mythology, meaning “water carrier,” and represents Ganymede, who was remarked for his pleasant figure and invited by Zeus to be the gods’ cupbearer and in return received eternal youth and a place in the night’s sky. Also it kind of looks like a pitcher pouring water if you squint hard enough at it. 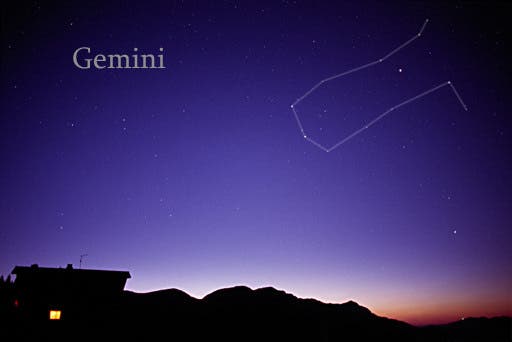 Ah, the Gemini. The story goes that they were once the twins Castor and Pollux, sons of Leda. But here the plot thickens in a typical ancient Greek fashion — Castor’s father was the king of Sparta, and Pollux’s was Zeus. When Castor was killed, Pollux begged Zeus to grant him immortality so they wouldn’t be separated — so the god placed them in the sky together.

These two twins of legend also give the names of the constellation’s brightest stars: Castor and Pollux, which form the twins’ heads (seen in the image as the two left-most stars.) From these two stars, the twins’ bodies form, giving the constellation a “U” or “=” shape. 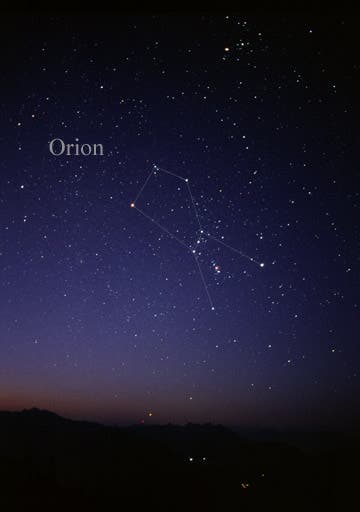 It’s one of the largest constellations out there and can be seen from around the world as it’s right on the celestial equator.

It also is one of the best-known constellations. The belt is one of the easiest to spot asterisms, with its three bright stars. Other defining features are Beta Orionis/Rigel (bottom right) and Alpha Orionis/Betelgeuse (top left). Finding the belt and those two stars is enough to pinpoint the constellation. But on clear, dark nights you can see the full constellation looks like a man holding a bow, from which it takes its name.

Orion is said to have been a giant, superbly gifted hunter, and son of Poseidon — because all Greek gods liked to sleep around to some degree. He often hunted with Artemis (the goddess of the hunt) and once boasted he will kill every animal on the planet. Gaia/Mother Earth didn’t appreciate that so she sent a scorpion against Orion.

The scorpion killed the hunter, which is the reason why Orion and Scorpius are said to never be visible at the same time. The mythos further says that Orion was revived by Ophiuchus (the serpent bearer) which is why this constellation comes between Orion and Scorpius.

True to his name, Orion can also be used as a reference to track other constellations in the winter sky — for example, you can see the right-most stars of Gemini a bit to the left of where “Orion” is written on the picture. 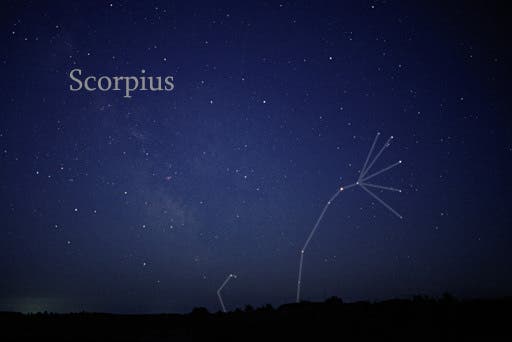 While duking it out with Orion, Zeus saw that the scorpion fought fiercely and was impressed by its courage. So he rewarded the animal by lifting him up to the stars.

Scorpius has many bright stars making it relatively easy to spot once you’re familiar with the shape. Antares is the brightest star and probably the easiest to spot. It’s sometimes called the heart of the scorpion and/or confused with Mars because of its red-orange hue.

Other distinctive features are the 3-5 stars that form the head and the constellation’s winding tail, forming an inverted “?”. 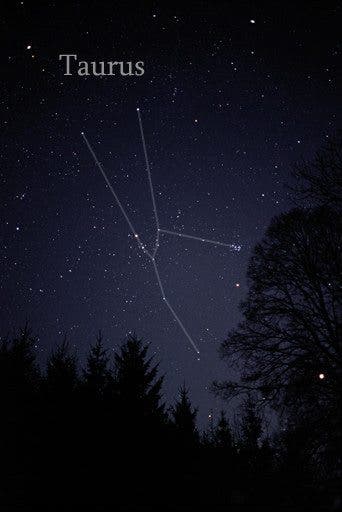 The Taurus is large and distinctive during winter months. Its most recognizable feature is the “V” shaped asterism, likened to the head and horns of a bull — as a bonus to help you imagine it better, Alpha Tauri/Aldebaran forms the bull’s right eye. Five stars are bunched up close to Aldebaran, forming a tiny “v” that is then continued by two stars which form the horns.

In this picture, you can see Orion’s head to the right of Taurus (it’s that one really bright star close to the right border at about the same level as the right horn forms.)

Exactly why it’s called the Taurus is a bit of a debate. Taurus is actually one of the first constellations recognized by humans. Western cultures probably had it passed down from the ancient Greeks, either from the story of Zeus who would turn into a bull to — surprise, surprise — seduce women without his wife finding out or from the 7th labor of Hercules.

But seeing as it’s a pretty recognizable shape and the bull was viewed as a sign of strength and endurance before Greek culture was established, it can come from an earlier source re-adapted to fit their culture.

Reach for the stars

This is just a taste of all the constellations up there — currently, we have 88 recognized constellation groups filling up the sky. So grab your star-map, a pair of binoculars, go on a hike with someone you enjoy and learn all of them. With so many stars to pick from, you might even end up naming a few constellations of your own.

Image credits: unless otherwise credited, image credits to Till Credner of AllTheSky.com, via Wikipedia.