The Mesopotamian Venice: The Lost Floating Homes of Iraq

The inspiring story of Marsh Arabs and their amazing sustainable floating homes.

by Tibi Puiu
in Feature Post, Green Living, World Problems
A A 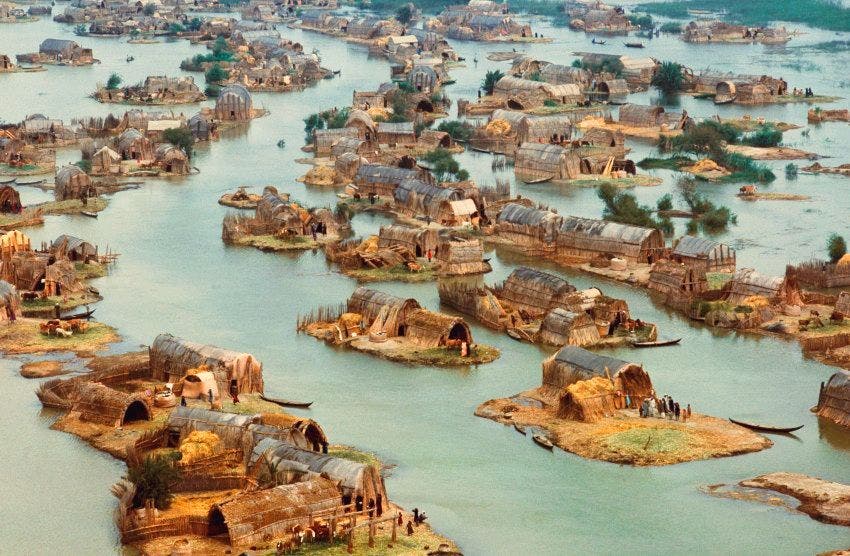 Nowadays, there is a lot of talk about living sustainably, and sometimes people go to great lengths for this purpose. It often surprises me just how complicated people choose to make this process when if you really want to live in a sustainable home and lead a sustainable lifestyle, you need not look too far — just go back to the roots. Sadly, the world right now is on the brink of a cultural amnesia. A language is dying every two weeks, urbanization is taking momentum once more and every nation’s heritage is slowly eroding away.  One needs only to learn about the Ma’dan to understand what I’m jabbering about. 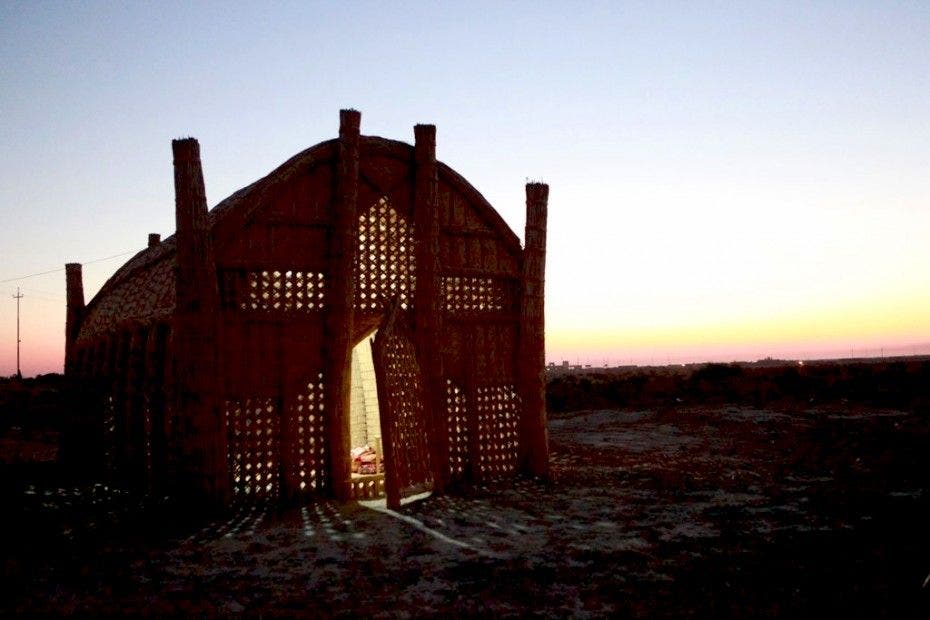 The Ma’dan, or Marsh Arabs, inhabit the marshy area at the junction of the Tigris and Euphrates rivers in Iraq. They are a semi-nomadic tribal people with their own distinct culture whose way of life has changed very little in the past couple thousand years. Their whole way of life revolves around the marshes — most notably, they traditionally build floating houses made entirely of reeds harvested from the open water and Qasab, a kind of giant grass that looks like bamboo, which can grow as tall as 25 feet (7.6 meters). 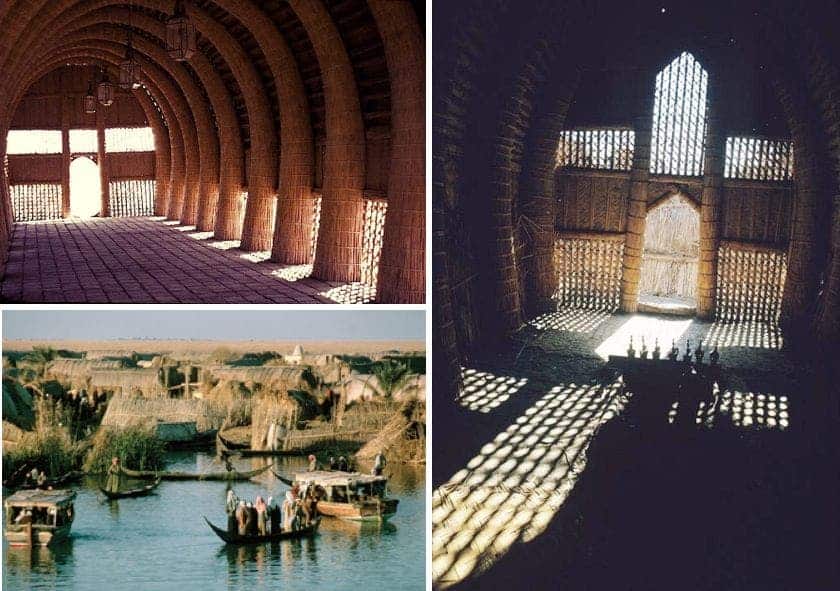 The islands on which the Ma’dan build their elaborate floating houses are called tuhul, and while they might look stable, they aren’t. The ground is very soggy and villagers often need to anchor their islands to avoid drifting into a neighbor. 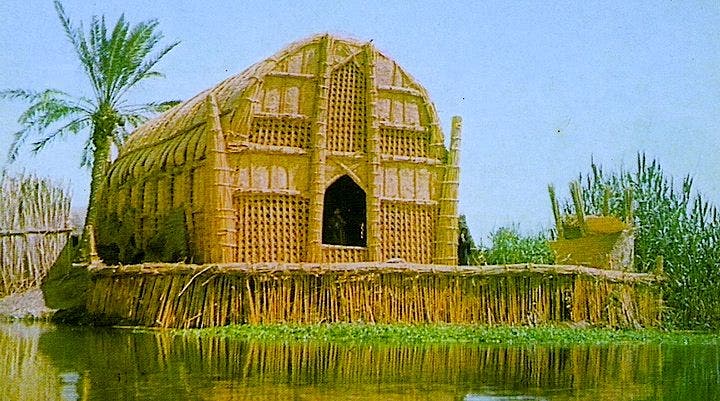 Ma’dan houses are architectural marvels — all built without any nails, wood or glass. It can take as little as three days to build a house, using a method that has remained unchanged for thousands of years. 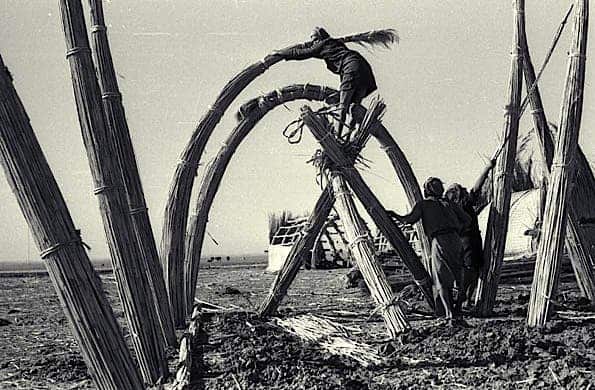 Houses built of reeds had the additional advantage of being portable. In the spring, if the marsh waters rose too high, a five-arched raba could be taken down, moved to higher ground, and re-erected in less than a day. With proper care and repair, reed dwellings could last for well over 25 years. 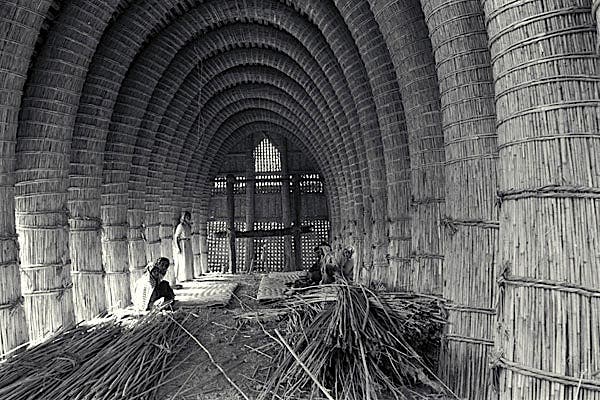 Not all reeds are equal. For instance, if arches were made from bundles of fresh reeds, the structure would collapse in short time. For better structural strength, the core of a new arch bundle was made up of reeds taken from an older structure. 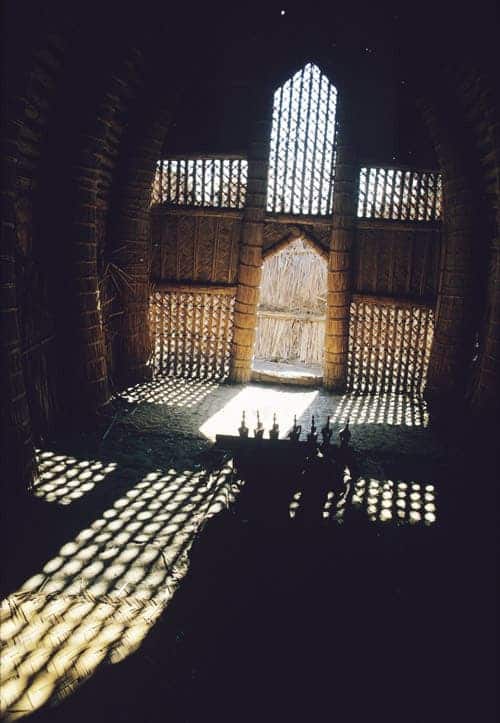 Almost every village has a guest house, called a mudhif. In fact, since the Ma’dan follow the traditional Arab code of honor, they welcome all guests as equals. They provide food and housing without expecting or accepting any payment. A host will never help a guest carry his belongings out of the house because that would imply that the host wanted the guest to leave. It’s a rare display of hospitality – one that may have brought their demise. 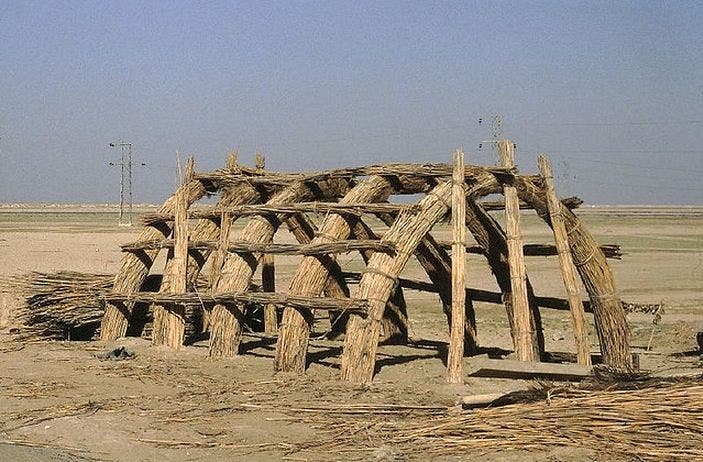 In the late 20th century, during Saddam Hussein’s regime, the Ma’dan were persecuted because the government suspected the marshes and their floating reed homes housed dissidents. In the past, the same marshes were a place of refuge for escaped slaves and serfs, and abiding the code of hospitality as they do, the Ma’dan could never say no to a stranger in need. 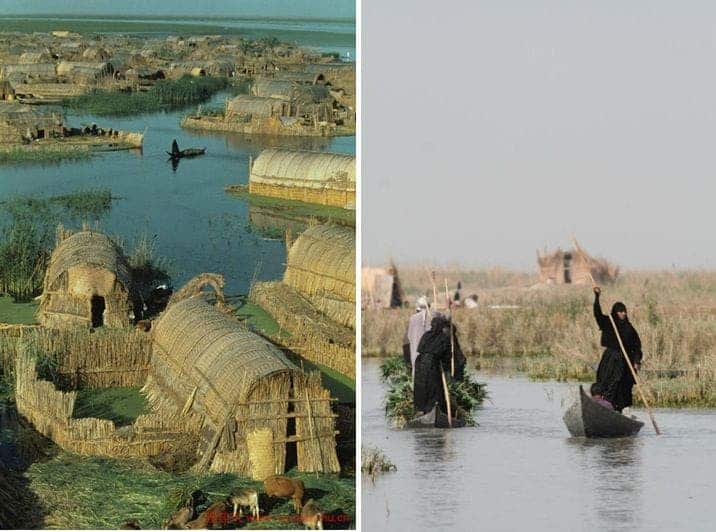 The ultimate punishment for their defiance came during the 1991 uprising in Iraq. Saddam Hussein ordered that the wetlands of southern Iraq be drained to serve as a lesson for the Ma’dan who housed militiamen the government regarded as terrorists.  To this end, the government recommissioned a 1970s irrigation project that had previously been shut down because it was disrupting the flow of water to the marshes.

The “solution” was effective. Quickly, the marshes were drained, food became scarce and the Ma’dan were forced out of their homes and lands. What little water remained was reportedly poisoned.

Only 1,600 of the nearly half million Marsh Arabs recorded in the 1950s were estimated to still be living in the traditional housing in this new millennium. 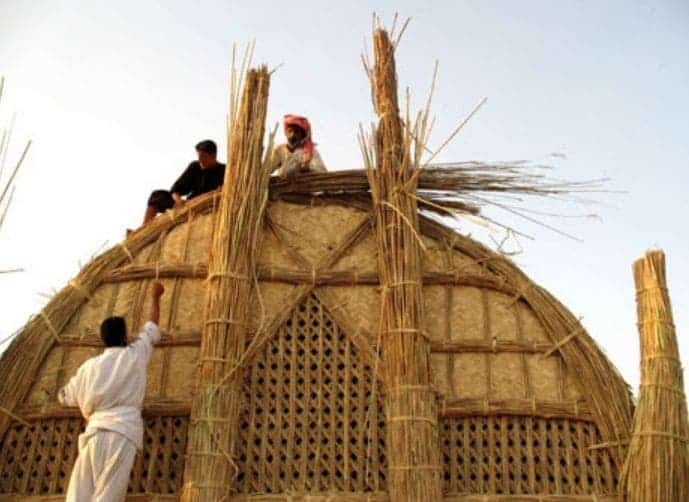 It’s a sad story, but the ending need not be so, too. After the fall of Saddam’s regime in 2003 following the invasion of Iraq by the United States, the dikes that had blocked water flowing to the marshlands were broken. The same years, a four-year drought came to an end — a coincidence that helped restore the wetlands to 50% of the size it had been in the 1970s. The ecosystem needs a lot more time to recover, and as for the Arabs, they’ve long moved on. Many live now in the cities, and their children know nothing of their people’s old ways. But there might still be hope. 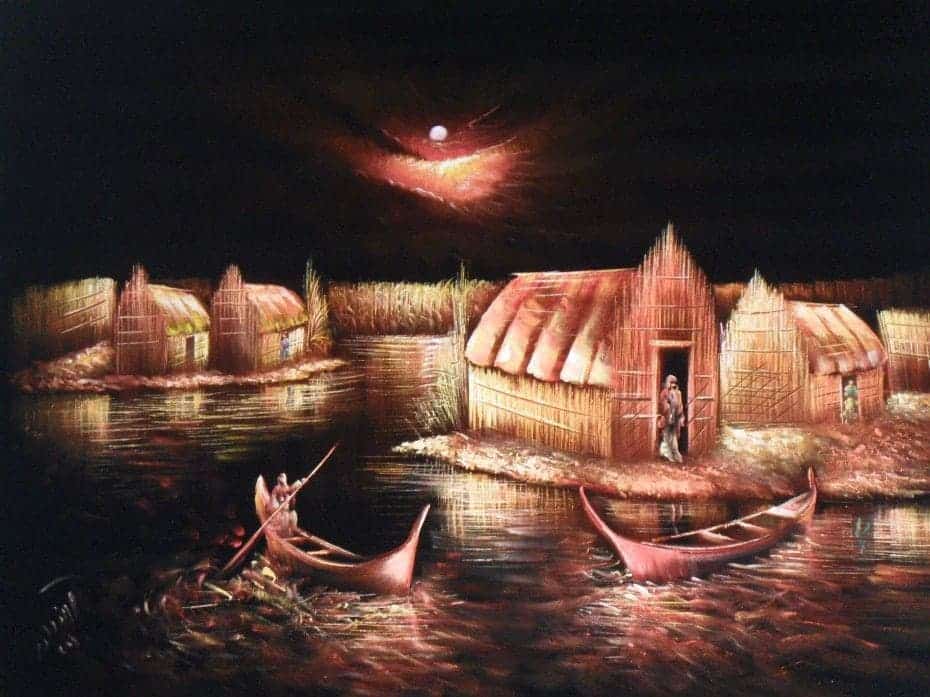 Nature Iraq, founded by an Iraqi-American hydraulic engineer who gave up his life in California to help restore the country’s lost garden of Eden, is leading efforts with financial support from the United States, Canada, Japan, and Italy. Already, he and a group of old Ma’dan people have rebuilt a  traditional mudhif, to demonstrate how these alternative, low-cost and sustainable buildings are still as viable today as they ever were. We need not necessarily complicate ourselves with smart materials, solar panels or what-not sensors. Of course, if you want Wifi and a sustainable smart home, be my guest. But the point is, people had some ideas of sustainable living thousands of years ago. There is a lesson here, and there’s much we can learn from the Ma’dan. My best wishes go to these noble people, unfortunate enough to live in a still war-torn country. Join me – these people need all your blessings!