How The Jetsons predicted the future

I remember watching The Jetsons out of sheer admiration for the future. The plot was kind of meh, some episodes were good, some episodes were so-so, but to the child I was at the time, The Jetsons was the future. So here we are now, in 2014… it’s the future – where’s my flying car or my transporter tube? Where’s my futuristic cities, where’s my regular space travel? Well, those things are quite a mile away from becoming a common reality, some have become part of our lives.

The first season of The Jetsons aired in 1962, with a run of 24 episodes. They depict a world in the 2060s, where flatscreens are the norm – everywhere. Sure, nowadays that seems common, but if you just take a look at other series, which were developed much later, even in the 1990s, you don’t see this rise of flatscreens. I always giggle a bit when I see the guys from Star Trek or Stargate doing interstellar travel with ease, but still not having flat screens.

Another interesting fact – George is still often reading the news on his paper newspaper, but sometimes, he is reading it on a smart TV – just like you would read it on a tablet. Interestingly enough, the first production flat panel display was the Aiken tube, developed in the early 1950s and produced in limited numbers in 1958. The plasma tube was invented in 1964, but few people imagined they would develop so quickly. In 2012, flat screens surpassed 50% of the market.

Out of control environmental degradation

This is my favorite one; it is never said out loud, but it is heavily implied several times throughout the series. In the Jetsons, everybody in the upper classes lives in very high buildings – you could basically say they “live in the sky”. But why?

They do it because pollution has run out of control. The most clear reference is when mister Spacely, George Jetson’s boss, says his company was founded in 1937, where it continued to prosper until massive surface pollution necessitated a move to the elevated platforms seen in the series. George Jetson also mentions that grass is “ancient history” (in a Flinstones crossover), and that if you want to go to the surface of the planet, you have to pass through the “smog layer”.

So while it is never directly mentioned that the surface of the planet is heavily polluted, it is severely implied – something, which, if we don’t change something soon, will likely happen until 2062. 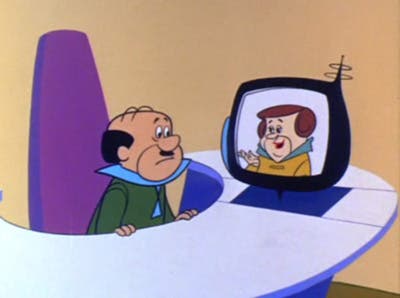 Video chat was predicted by many, but The Jetsons were among the first. While you don’t see mister George or mister Spacely use Plantronics Cisco Headsets  or Skype to talk to their families, the technology is similar. Videophones and videoconferences (with more than 2 people) were developed all the way back in the 970s as part of AT&T’s development of Picturephone technology. However, it wasn’t until the early 2000s that everything really took off, and now everyone can use a Plantronics office headset or your smartphone or even your TV. Just like with LCDs, many people were predicting them, but it was the Jetsons who guessed how ubiquitous it would all become.

After 9 years of development and bureaucratic processes, the PillCam was finally approved! What’s the PillCam? Rembember when George goes to the doctor? The doctor just gives him a pill to swallow and sees what’s inside his stomach – and that’s exactly what the PillCam does! 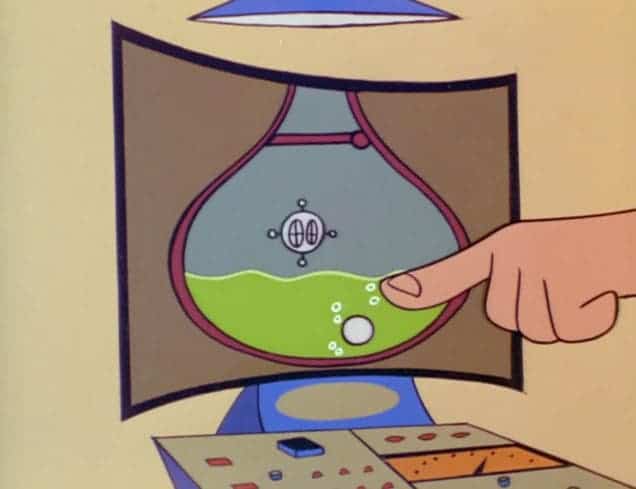 Well, of course it doesn’t work in color yet (like The Jetsons), but it’s basically the same principle. This episode is one of the more darker ones produced in the series, with George feeling like he has nothing left to live for and going on a pseudo-suicidal spree. This is the future, but people can still do stupid things.

Everything in The Jetsons revolves around nanotechnologies – even George’s car shrinking to a suit-case size, and we’re beginning to see that. As of August 21, 2008, the Project on Emerging Nanotechnologies estimates that over 800 manufacturer-identified nanotech products are publicly available, with new ones hitting the market at a pace of 3–4 per week and the number continuously growing. So while we don’t have shrinking cars, we have itanium dioxide in sunscreen, cosmetics, surface coatings,and some food products; Carbon allotropes used to produce gecko tape; silver in food packaging, clothing, disinfectants and household appliances; zinc oxide in sunscreens and cosmetics, surface coatings, paints and outdoor furniture varnishes; and cerium oxide as a fuel catalyst. We’re still in the incipient phases of nanotechnology, but we’re getting there.

BONUS: one thing The Jetsons didn’t get right: stereotypes

If you look at The Jetsons, the future looks pretty great – if you’re upper class and white. There are no black, Asian or Hispanic people (I may be wrong and I may have slipped something, but either way, they’re clearly underrepresented). Hopefully, the future will belong to people of all ethnic groups, races and colours. Now, I don’t think they meant to make it like this in a racist spur or anything like that – remember, the show was filmed in the 60s, and it is a victim of the stereotypes of that time. Let’s not make the same mistake, OK? Let’s build an even better future – for everybody!