When Fukushima’s nuclear accident unfolded, people fled the area without looking back. But one man realized that humans aren’t the only victims of the tragedy. Naoto Matsumura went back to Fukushima’s 12.5-mile exclusion zone to care for the abandoned animals.

In 2011, one of the biggest earthquakes in recorded history struck Japan. The 9.1 temblor took even seismologists by surprise, as did the following events. The earthquake generated a tsunami which broke through the defenses of the Fukushima nuclear plant; this led to a radiation leak, and everyone in the surrounding area was evacuated, leaving behind empty houses, abandoned buildings and uncared-for animals.

Matsumura too left at first, but he quickly returned. The 53-year-old fifth-generation rice farmer initially went back for his own animals, but quickly realized that many others need his help.

“I was scared at first because I knew the radiation had spread everywhere,” he said of his initial days back home. “The next thought in my head was that if I stayed too long, I’d end up with cancer or leukemia. But, the longer I was with the animals, the more I came to see that we were all still healthy and that we would be OK.”

Indeed, he is now the only man in the contaminated area, and refuses to leave it. He is fully aware that the radiation is dangerous. He knows the risks he’s exposing himself to, but he says he refuses to think about that.

“They also told me that I wouldn’t get sick for 30 or 40 years. I’ll most likely be dead by then anyway, so I couldn’t care less.”

Scientists have conducted tests on him to see how his body is taking the shock. They found that he is being bombarded with radiation levels 17 times stronger than the normal person, because he was not only living in a radioactive area, but because he was also eating food and drinking water from the site. Doctors advised him to drink only clean water and get food supplies from the outside, and so he did.

“When I went down and let them look me over, they told me I was the ‘champion,’” he said, meaning he had the highest level of radiation exposure in Japan.

He’s gotten used to it now, he said the strangest thing was the silence. But he’s not alone – he’s taking care not only of his animals, but of most of the animals that remained in the city. Some have went feral or semi-feral, but many have come to rely him. Cats usually stay out of sight as do some dogs, but cattle remained domestic.

“Our dogs didn’t get fed for the first few days. When I did eventually feed them, the neighbors’ dogs started going crazy. I went over to check on them and found that they were all still tied up. Everyone in town left thinking they would be back home in a week or so, I guess. From then on, I fed all the cats and dogs every day. They couldn’t stand the wait, so they’d all gather around barking up a storm as soon as they heard my truck. Everywhere I went there was always barking. Like, ‘we’re thirsty’ or, ‘we don’t have any food.’ So I just kept making the rounds.”

The remaining cattle barely survived, but over 100 didn’t make it – not only due to starvation, but because of the government. After the human evacuation, officials decided that livestock couldn’t be cared for, couldn’t be consumed, and so they had to euthanize them. This upset Matsumura.

“If they were going to be used for meat it wouldn’t bother me,” he said. “That’s just the way life is. But why just slaughter them all and bury them? Animals and humans are the same. I wonder if they could kill people just as indiscreetly… In my book it would be better to adopt a wait-and-see approach because it could provide good experimental data for comparison with humans. If the animals survive, then maybe there’s nothing to worry about. But if the animals start giving birth to deformed young a few generations down the line, then things could get crazy. If that happens, they should never let anyone come back here.”

To contribute and help him, check either this page (English, not updated) or this page (Japanese, updated). 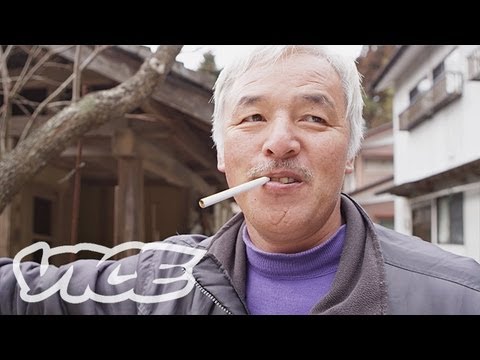