3D printing is just as cool as it is useful – as designed John Edmark. These spinning sculptures only become animated when you look at them through a stroboscopic light, or with a camera with a very short shutter speed (1/4000 sec).

“If change is the only constant in nature, it is written in the language of geometry. Much of my work celebrates the patterns underlying space and growth. Through kinetic sculptures and transformable objects, I strive to give viewers access to the surprising structures hidden within apparently amorphous space.”

They’re called Fibonacci sculptures because they were constructed based on the Fibonacci numbers – a series of numbers that starts with 0 and 1 and then constructs numbers based on the sum of the past 2. The series goes like this: 0, 1, 1, 2, 3, 5, 8, 13, 21, 34 and so on. What’s interesting about these numbers is that they also appear in biological settings, in two consecutive Fibonacci numbers, such as branching in trees, arrangement of leaves on a stem, the fruitlets of a pineapple, the flowering of artichoke, an uncurling fern and the arrangement of a pine cone, and the family tree of honeybees. These sculptures were also based on nature:

“The placement of the appendages is determined by the same method nature uses in pinecones and sunflowers. The rotation speed is synchronized to the strobe so that one flash occurs every time the sculpture turns 137.5º—the golden angle. If you count the number of spirals on any of these sculptures you will find that they are always Fibonacci numbers”, Edmark explains. 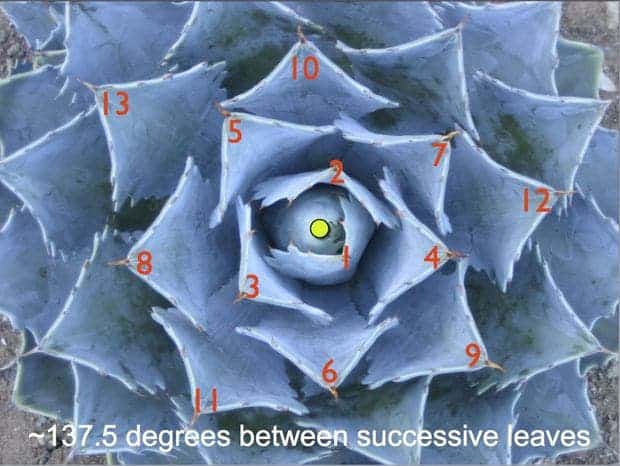 In case you’re wondering what you’re seeing actually, you are actually seeing all the petals on the sculpture in the order of their respective distances from the top-center. If you happen to have a 3D printer handy, you can find instructions on how to make these over on Instructables. The website also has a lot of fun and interesting information about Fibonacci art.

Edit: Zoetrope is one of several pre-film animation devices that produce the illusion of motion by displaying a sequence of drawings or photographs showing progressive phases of that motion. In practice, the zoetrope consists of a cylinder with slits cut vertically in the sides. On the inner surface of the cylinder is a band with images from a set of sequenced pictures. As the cylinder spins, the user looks through the slits at the pictures across.