They call them the Catacomb Saints – ancient Roman corpses that were exhumed from the catacombs of Rome, given fictitious names and sent abroad as relics of saints from the 16th century to the 19th century. They were decorated with extreme lavishness, as you can see below. 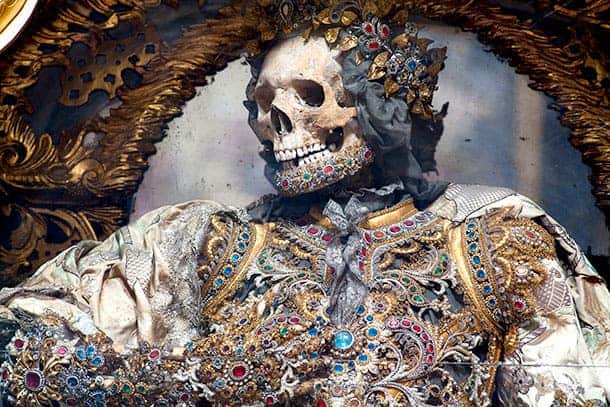 But why – why would they be decorated with such luxury? Were they actually buried like this, or did something else happen? Well, they aren’t actually saints in the strict sense, though some of them may be early Christian martyrs. During the 15th century, western Europe was shaken by the Beeldenstorm – the statue fury – a term used for outbreaks of destruction of religious image. During these spates of iconoclasm, Catholic art and many forms of church fittings and decoration were destroyed in unofficial or mob actions.

As the Catholic churches were systematically stripped of their icons, the Vatican came up with a rather strange solution. They ordered that thousands of skeletons be exhumed from the catacombs beneath Rome and installed in towns throughout Germany, Austria and Switzerland. Few, if any, of the corpses belonged to people of any religious significance, but they were decorated like saints. 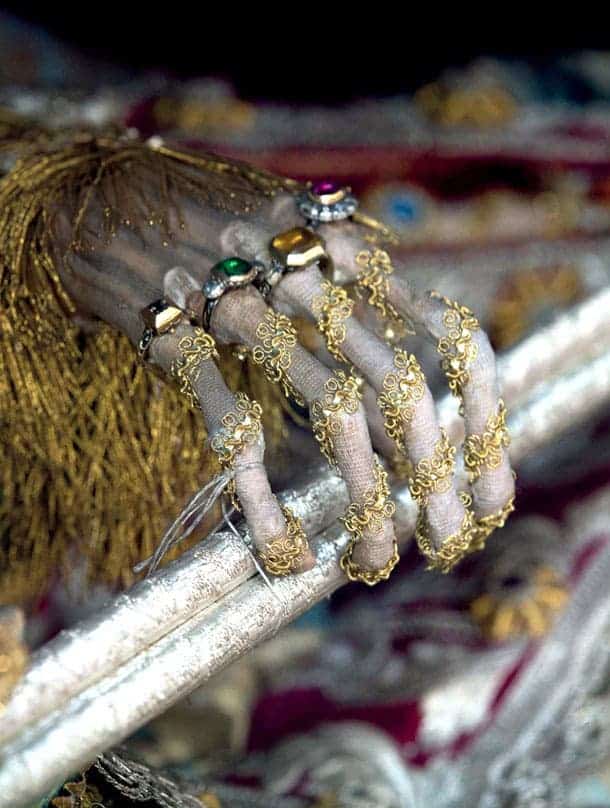 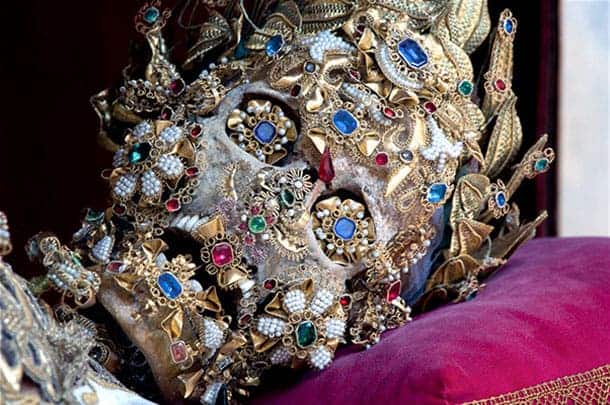 The skeletons became gruesome symbols of catholicism in areas dominated by protestants. It’s not clear if this move was effective at any time, but by the 19th century, they became an embarrassing symbol of past friction. Although it was considered simony and forbidden to sell the skeletons or their jewelry, some ‘entrepreneur’ priests managed to make money from transporting them around the country and for some blessings.

In 1803, the secular magistrate of Rottenbuch in Bavaria auctioned the town’s two saints. 174 years later, in 1977, the residents of the town raised funds to have them returned, but for the most part, the catacomb saints were mostly forgotten and cast aside. 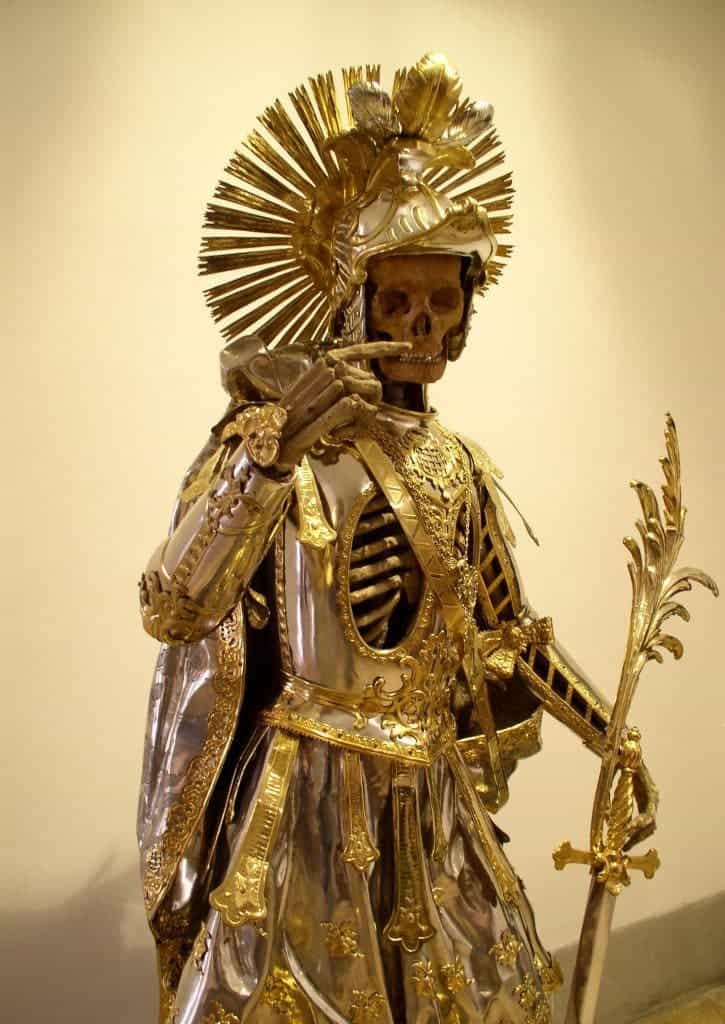 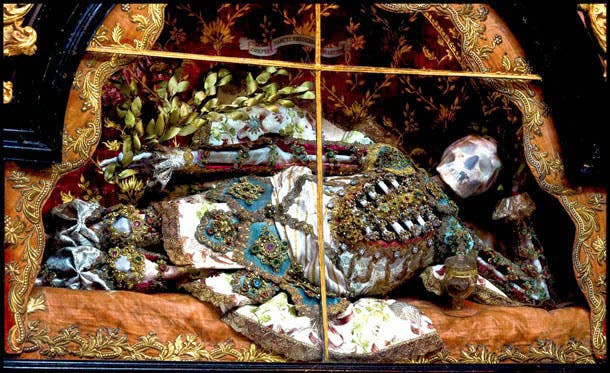 But it was their time to come in the spotlight again in 2013, when Paul Koudounaris revived interest in them with his new book, where he tried to photograph and document each and every one of the catacomb saints. It’s unclear if he actually did, but he certainly managed to bring them into the public eye. He explains:

‘After they were found in the Roman catacombs the Vatican authorities would sign certificates identifying them as martyrs then they put the bones in boxes and sent them northwards. The skeletons would then be dressed and decorated in jewels, gold and silver, mostly by nuns.

‘They had to be handled by those who had taken a sacred vow to the church – these were believed to be martyrs and they couldn’t have just anyone handling them. They were symbols of the faith triumphant and were made saints in the municipalities. One of the reasons they were so important was not for their spiritual merit, which was pretty dubious, but for their social importance. 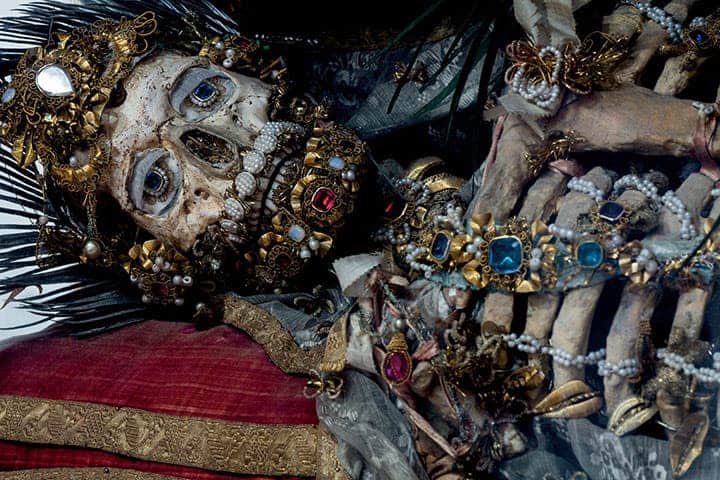 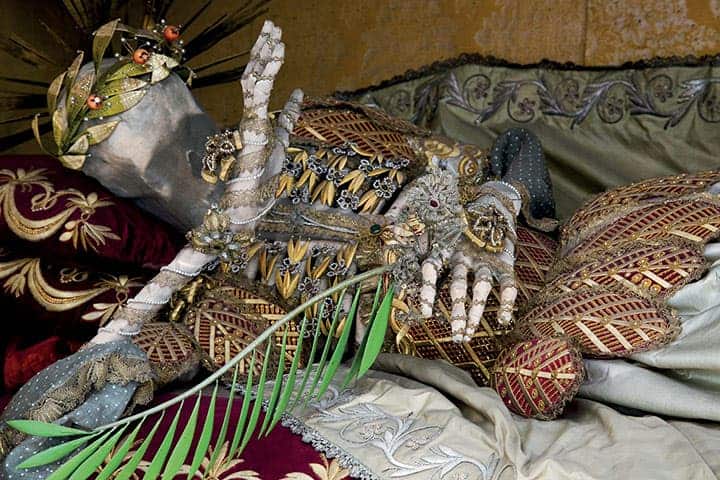 He also adds that as time passed, their significance changed, becoming from religious symbols, city symbols.

‘They were thought to be miraculous and really solidified people’s bond with a town. This reaffirmed the prestige of the town itself.’
He added: ‘It’s impossible to put a modern-day value on the skeletons.’ 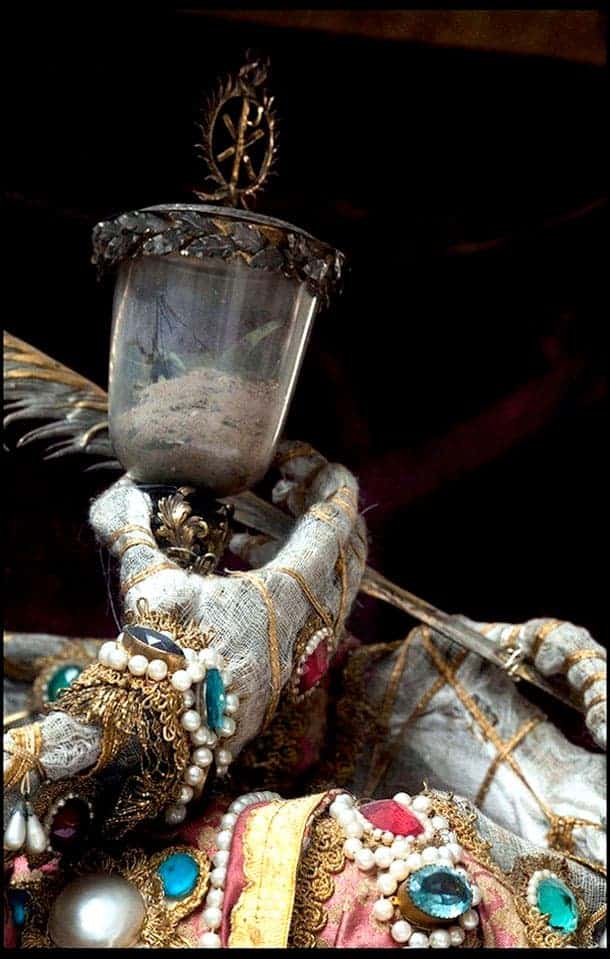 You can get the book with all the pictures HERE.