The Cassini shuttle is a flagship sent to Saturn to conduct observations of Saturn and its moons. The mission started 18 years ago, and since then Cassini has sent over some mind-bending pictures. Here are just some of them, courtesy of NASA. 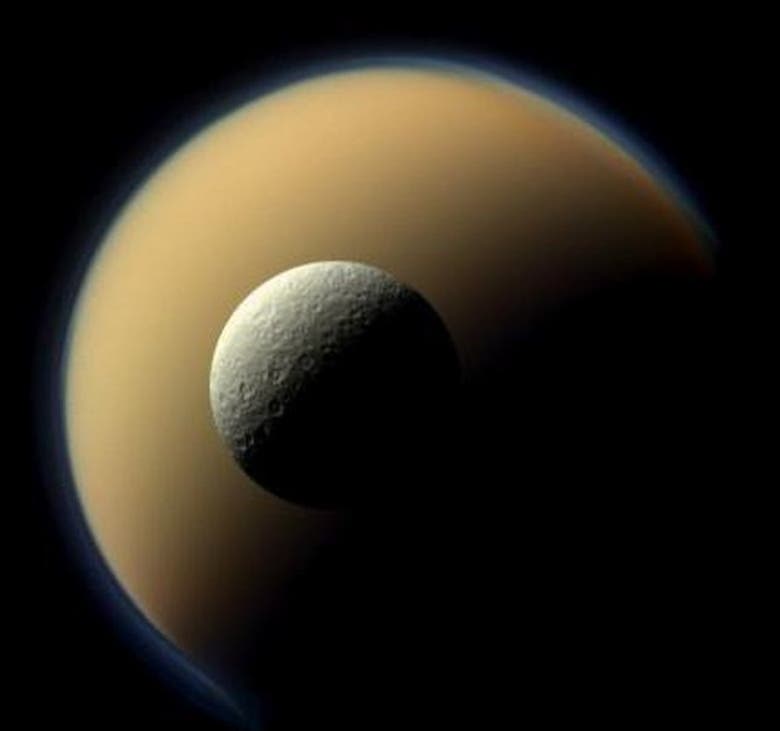 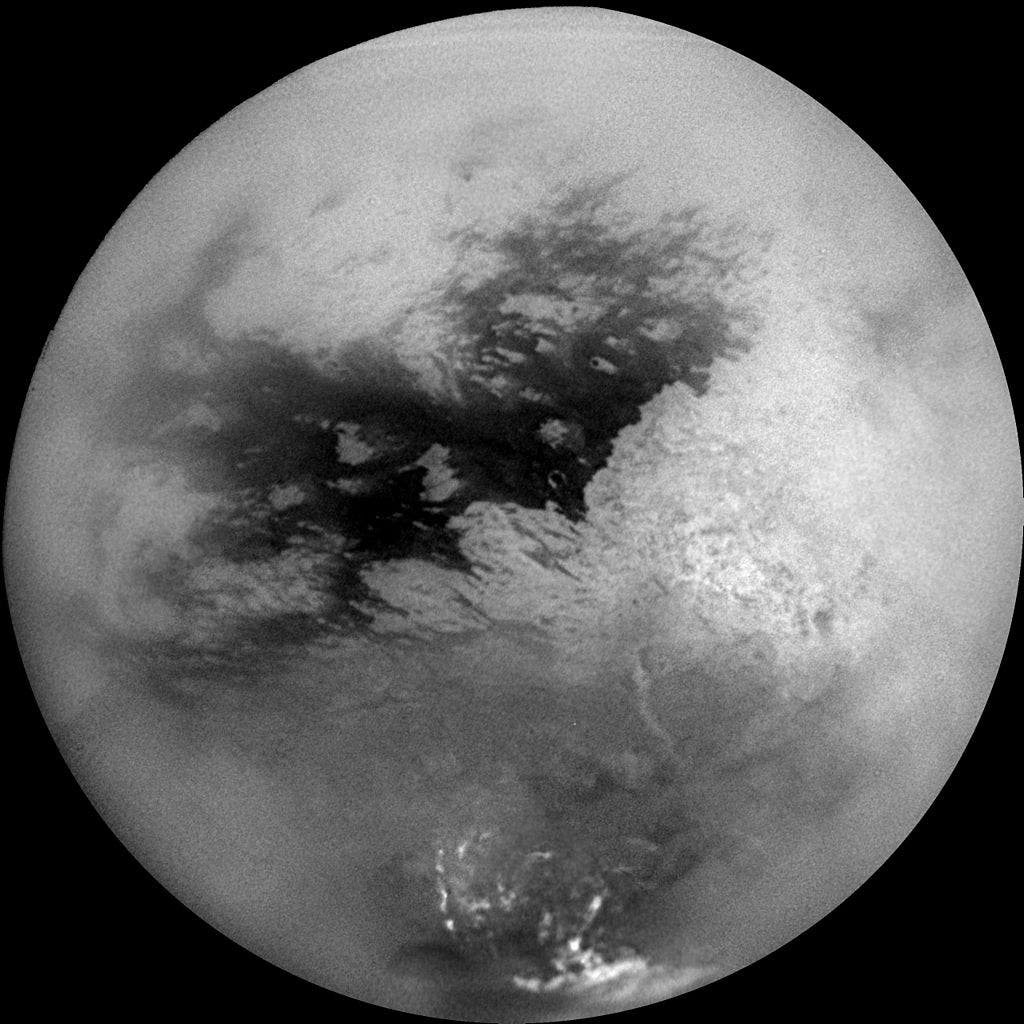 Titan’s surface was imaged by looking through the atmosphere in 2004, but some clouds remain visible. 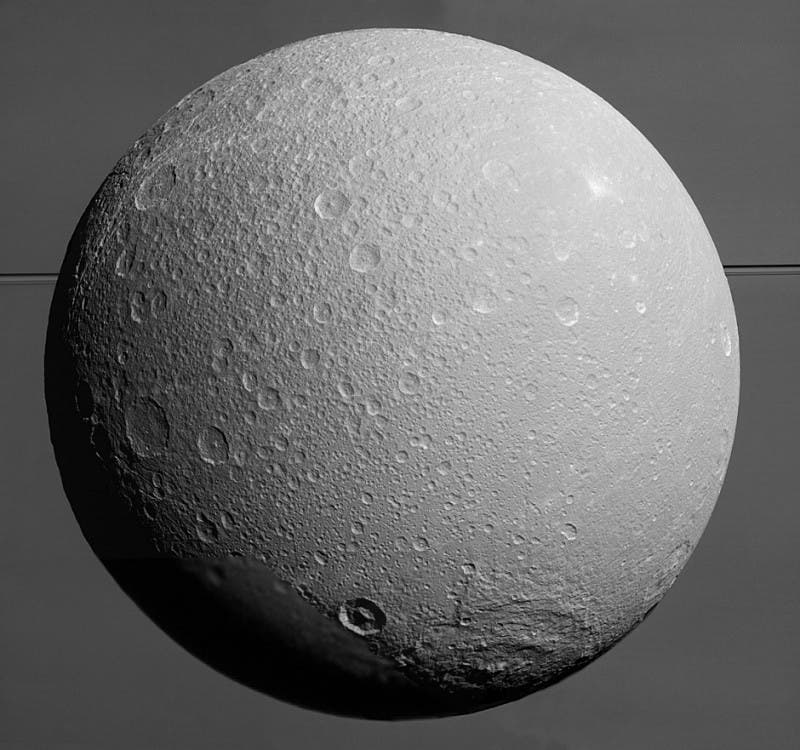 A crater-riddled, icy landscape covers Saturn’s moon Dione, but that doesn’t take away anything from its charm. Cassini revealed that the bright ‘wisps’ on Dione are in fact bright ice cliffs created by tectonic fractures (chasmata).

Saturn passing in front of the Sun

This almost looks like an artistic creation, but it’s very much an image – albeit a composite image. This composite (layered image) made from 165 images taken by the wide-angle camera on the Cassini spacecraft over nearly three hours on September 15, 2006 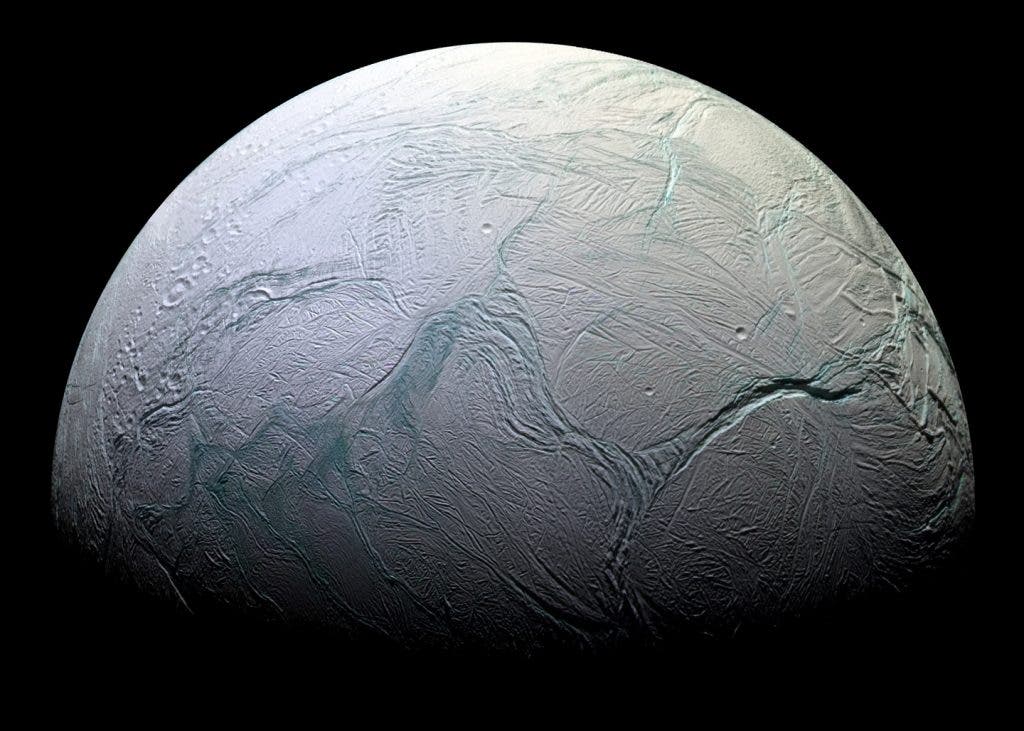 Before Cassini, little was known about Enceladus, but now, the moon of Saturn is considered to be one of the most interesting bodies in the solar system. Astronomers and geologists believe that there is an ocean of liquid water beneath the frozen surface – you’ve guessed it – one that can possibly host life. 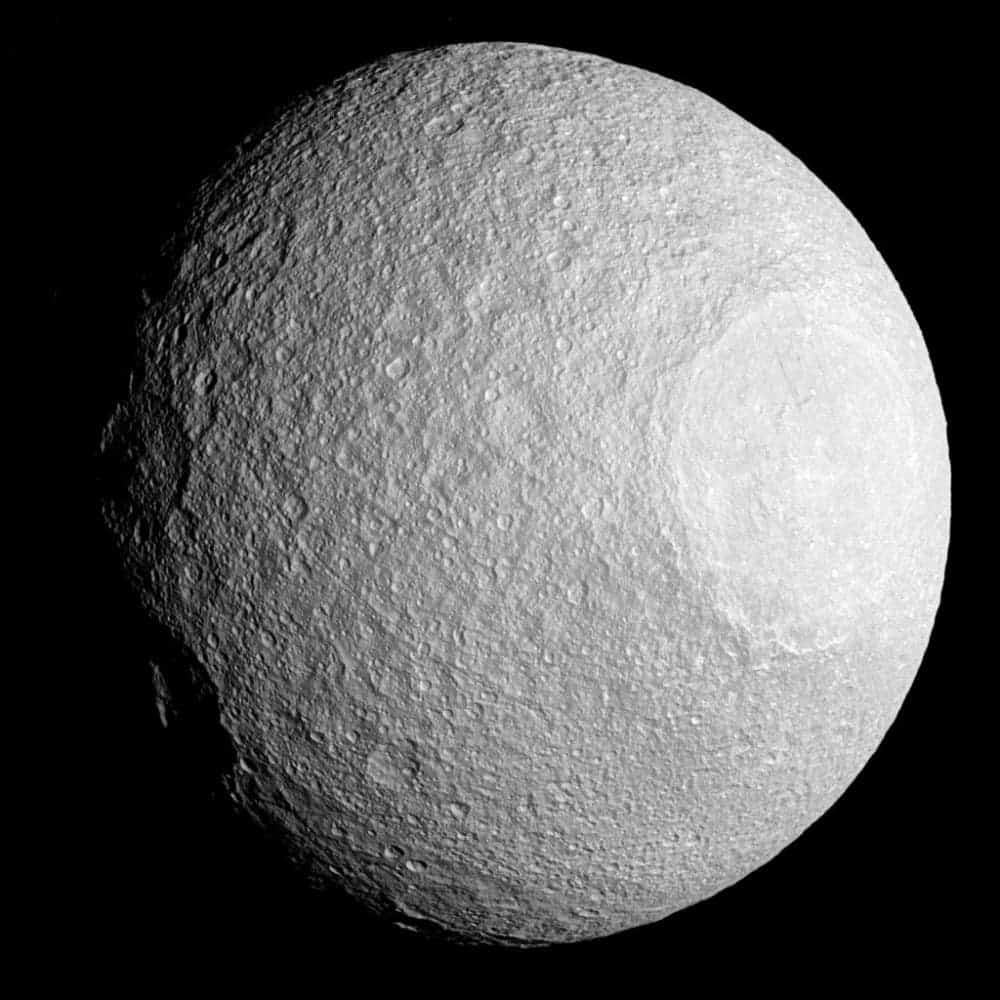 Tethys is a mid-sized moon of Saturn about 1,060 km (660 mi) across made of water ice with just a small fraction of rock (we know this because of its very low density, lower than water). Tethys is heavily cratered and cut by a number of large faults/graben which indicate significant tectonic-like features, but so far, there is no explanation for these red streaks. 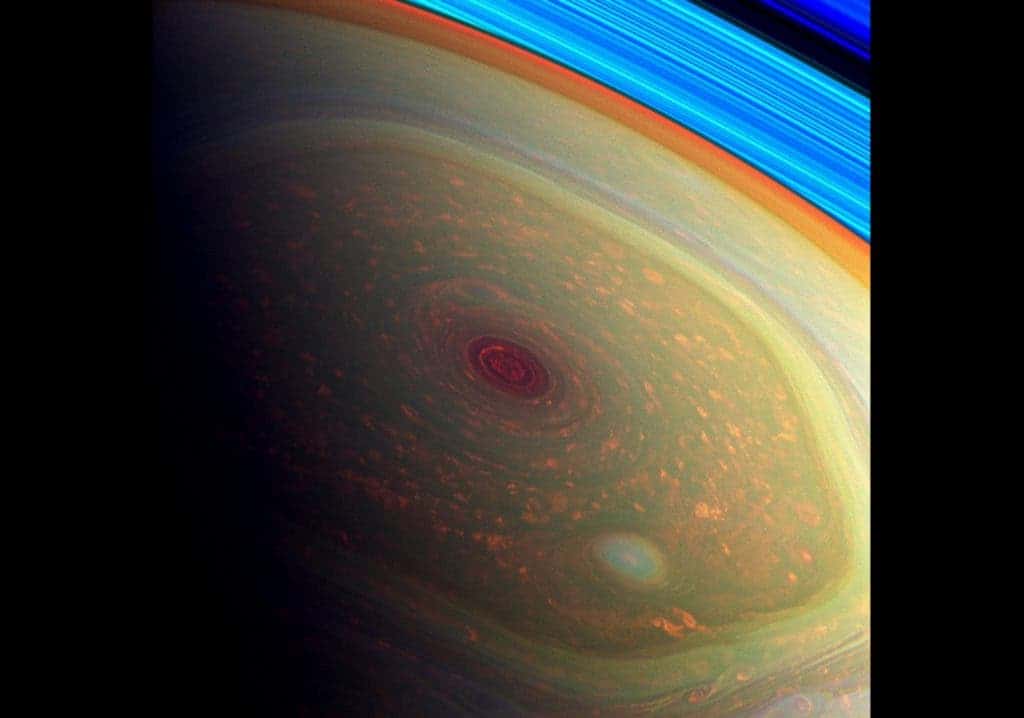 Saturn’s hexagon is a persisting hexagonal cloud pattern around the north pole of Saturn, larger than the diameter of the Earth.  Cassini was only able to take thermal infrared images of the hexagon, until it came in the sunlight in January 2009. 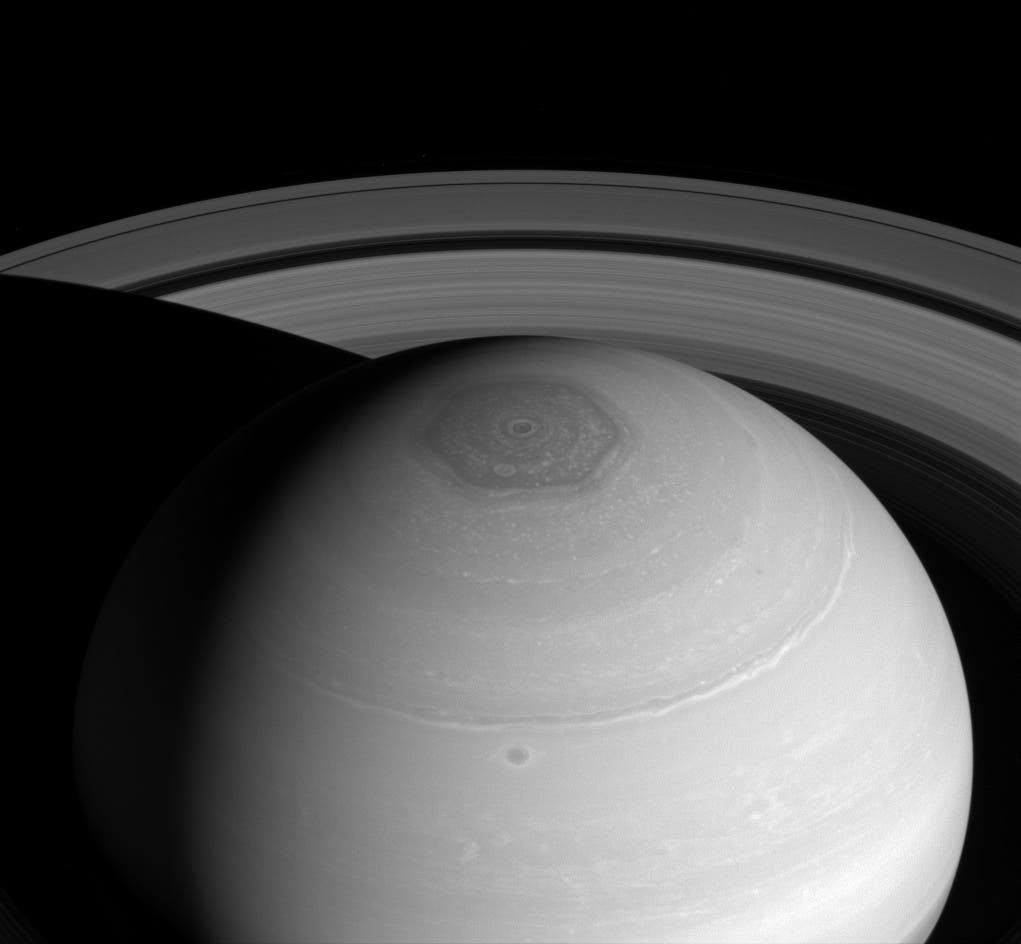 Naturally, astronomers were puzzled by this feature, and the only plausible explanation for it developed at Oxford University, is that the hexagon forms where there is a steep latitudinal gradient in the speed of the atmospheric winds in Saturn’s atmosphere. Tests conducted in the lab developed similar features, but didn’t always appear at hexagons. But that’s not even the scariest storm on Saturn… 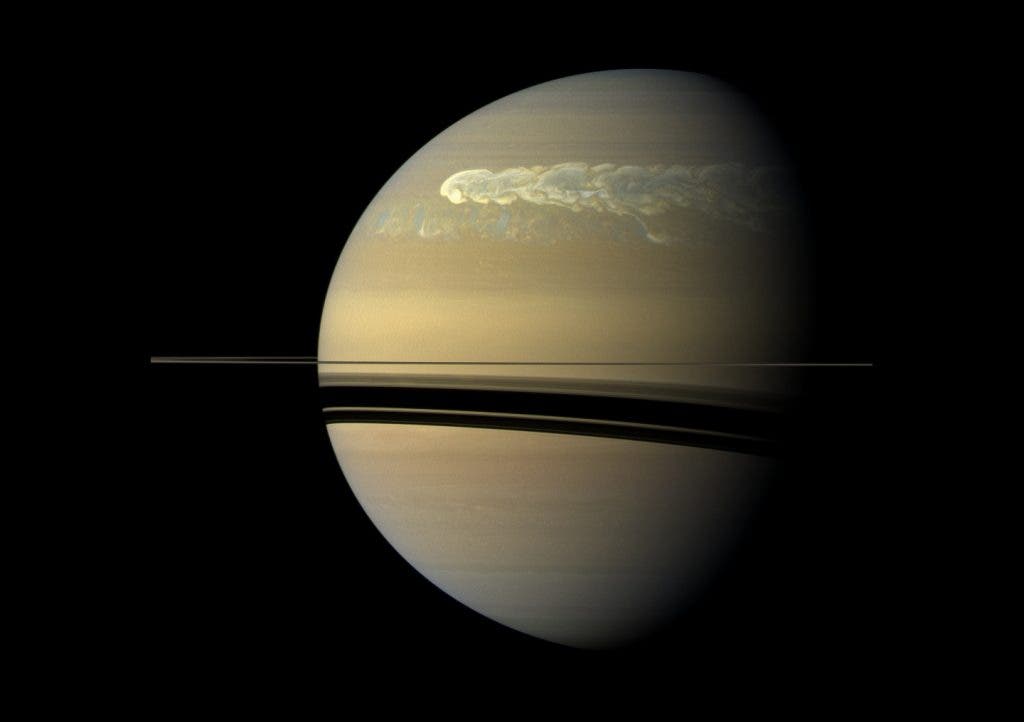 Named in analogy to Jupiter’s Great Red Spot, this is a periodic summer storm visible even from Earth. Cassini data has revealed a loss of acetylene in the white clouds, an increase of phosphine, and an unusual temperature drop in the center of the storm. 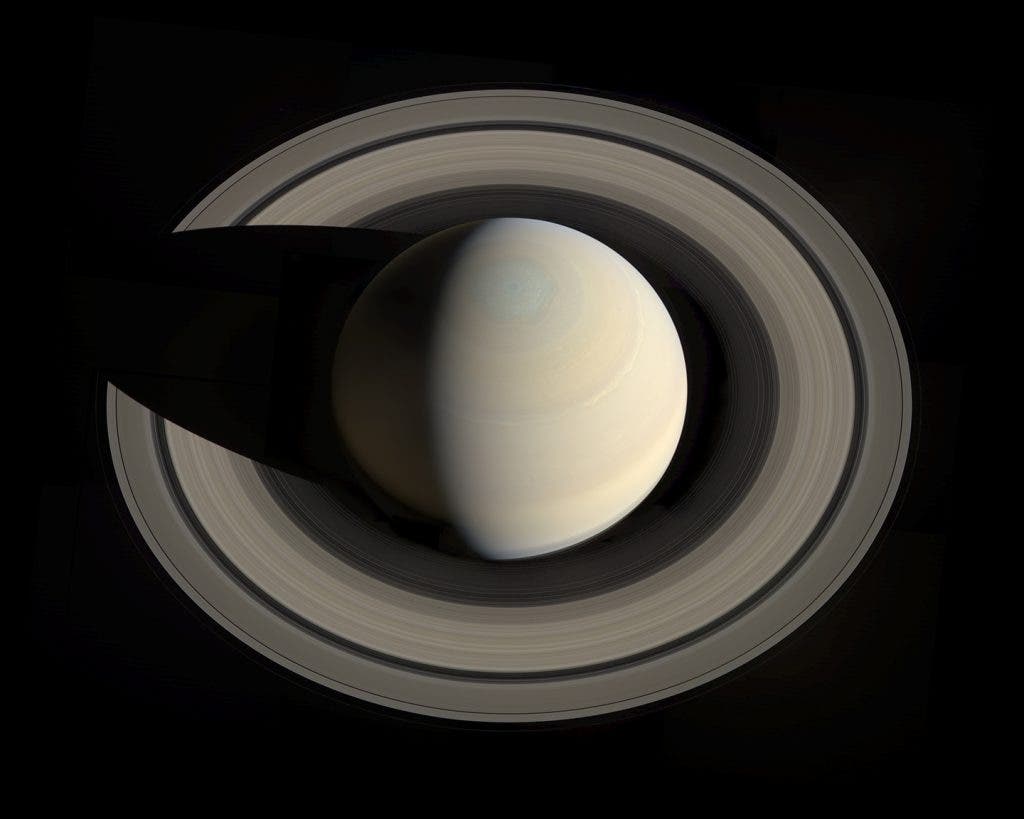 Almost too perfect to be a real image.

Equatorial ridge on the moon Iapetus 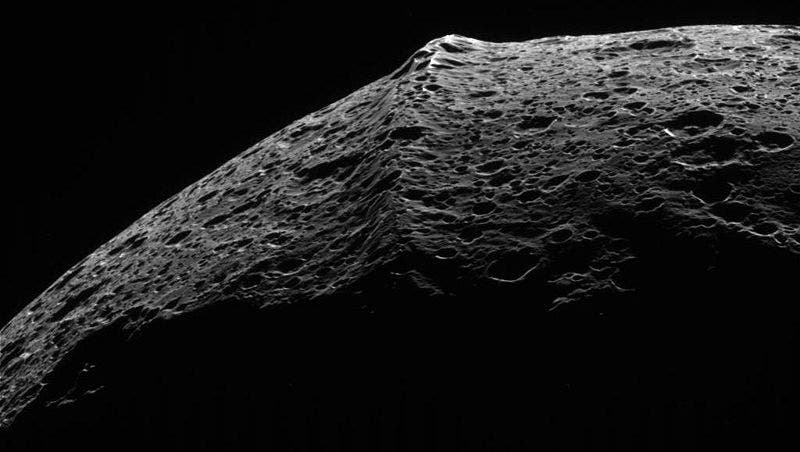 This mysterious feature that follows Iapetus’ equator is still unexplained. About 1,300 km long, 20 km wide, and 13 km high, it forms some of the highest mountains in the solar system. There are several competing hypotheses, but none of them is able to properly explains what formed this ridge and why it follows the equator so perfectly. 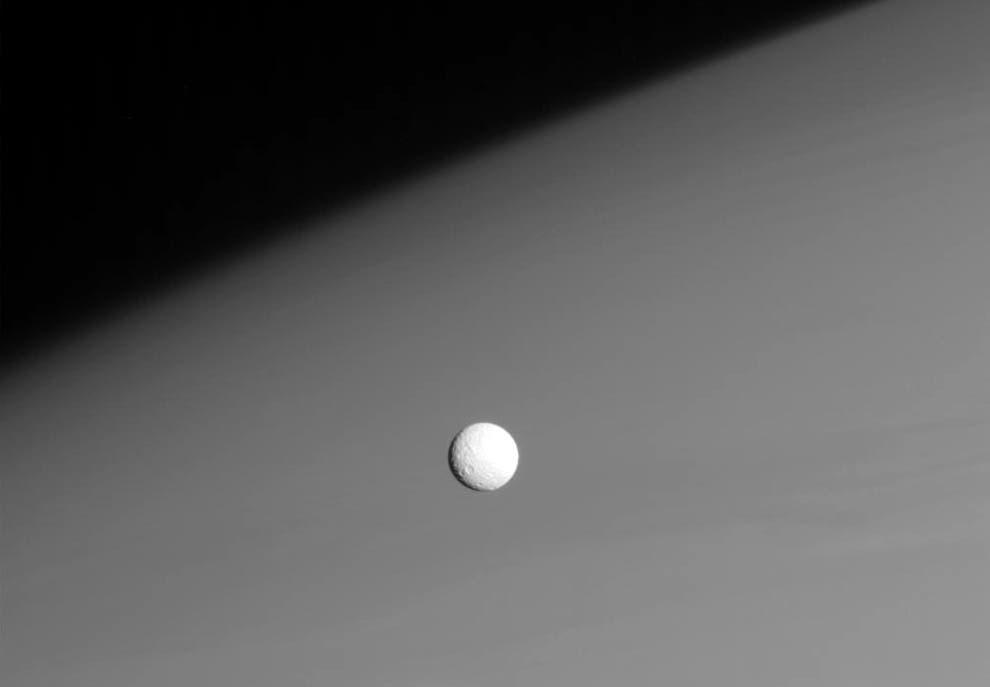 Here we see the small moon Mimas passing in front of Saturn’s upper atmosphere. The surface area of Mimas is slightly less than the land area of Spain. 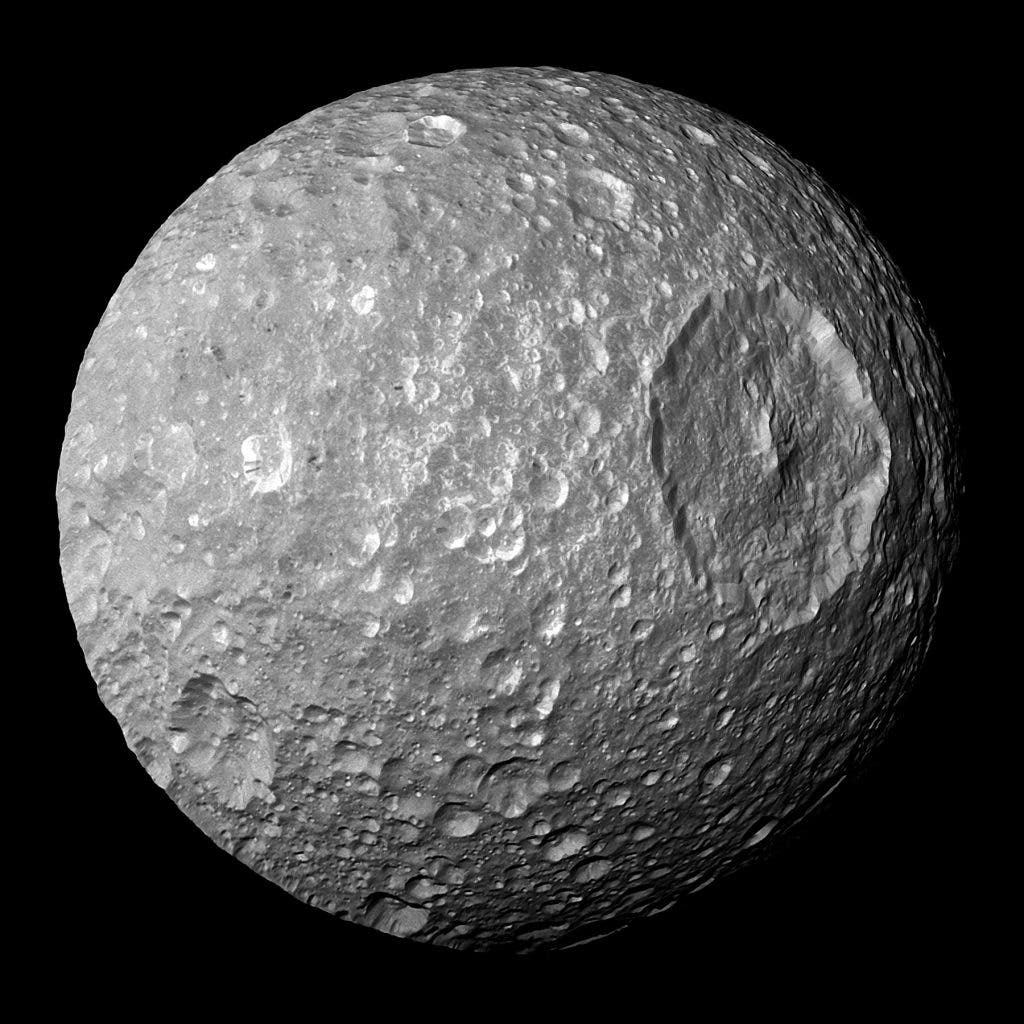 Mimas with its large crater Herschel, its most noticeable feature. The Mimantean surface is saturated with smaller impact craters, but no others are anywhere near the size of Herschel. The impact that formed the crater must have shattered Mimas – fractures can be seen on the opposite side of Mimas that may have been created by shock waves from the impact. 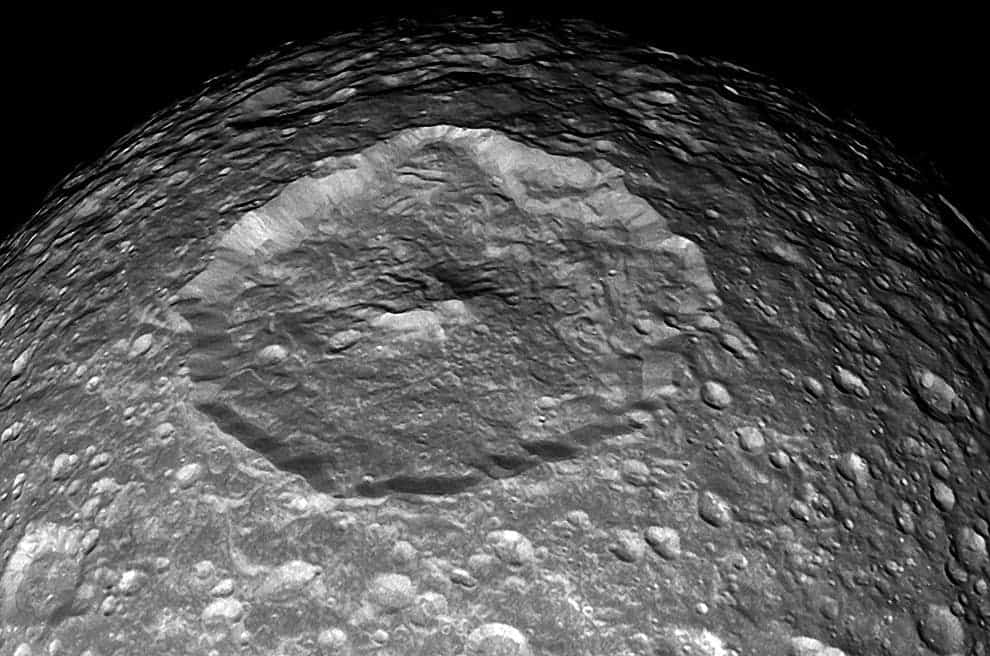 The fact that Cassini can take so high quality and up-close pictures is simply baffling to me. 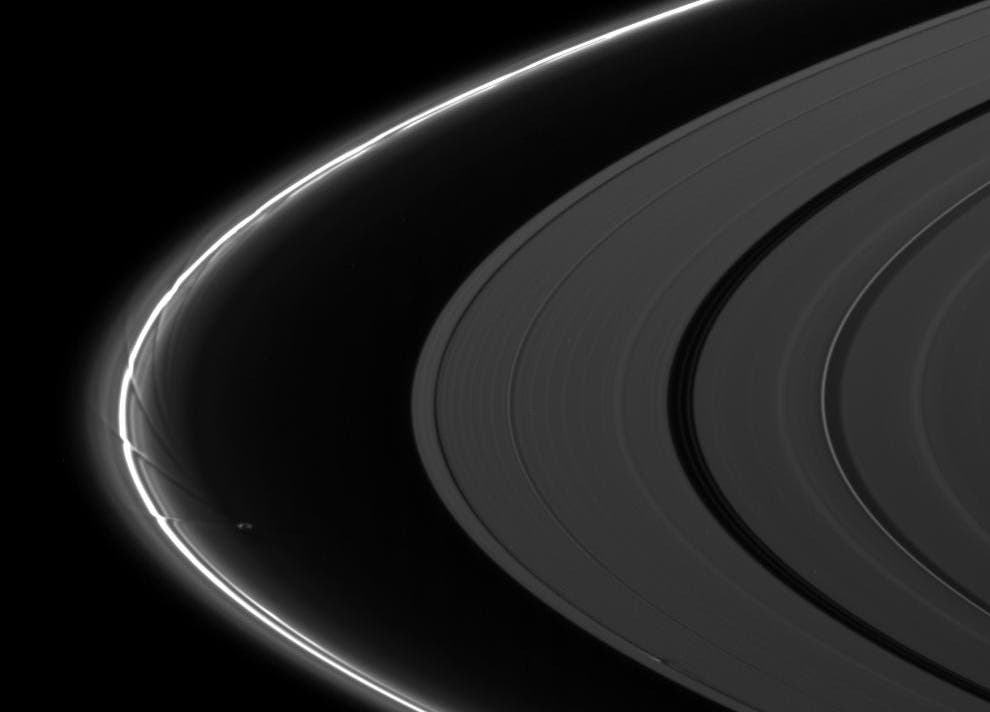 Prometheus wasn’t discovered until 1980, measuring only 43 km in mean radius. 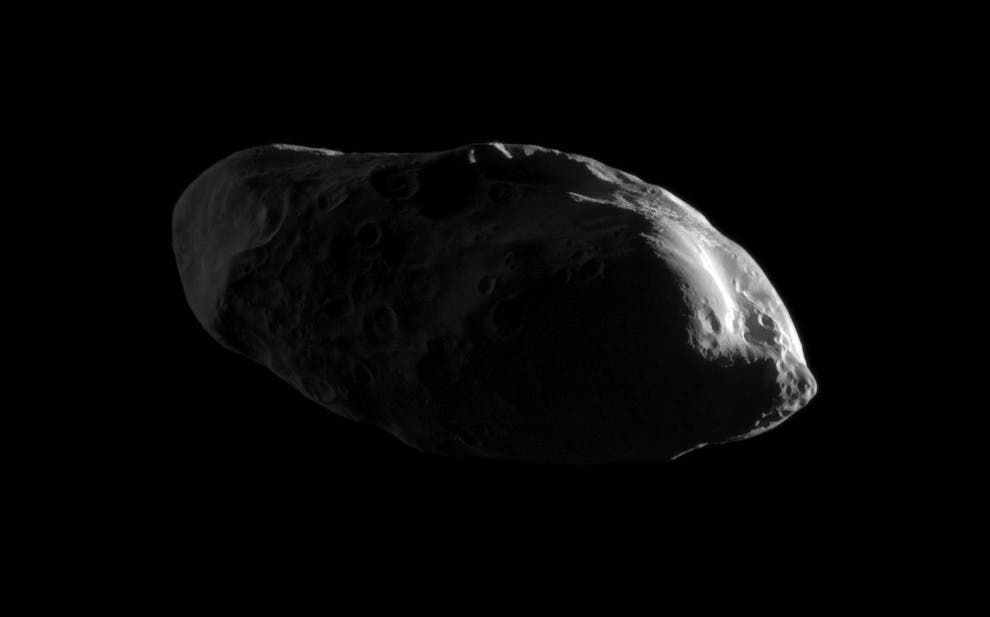 At a cosmic scale, Prometheus is little more than a pebble flying through space. 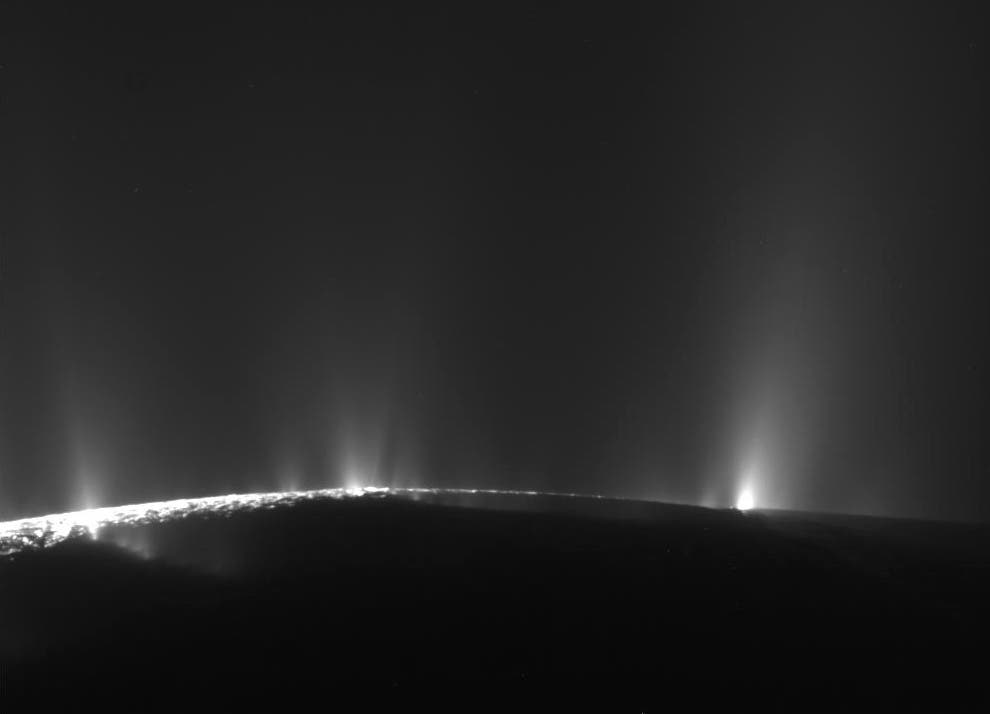 Over 100 geysers have been identified. Some of the ejection comes back as snow, while some of it feeds Saturn’s E ring. 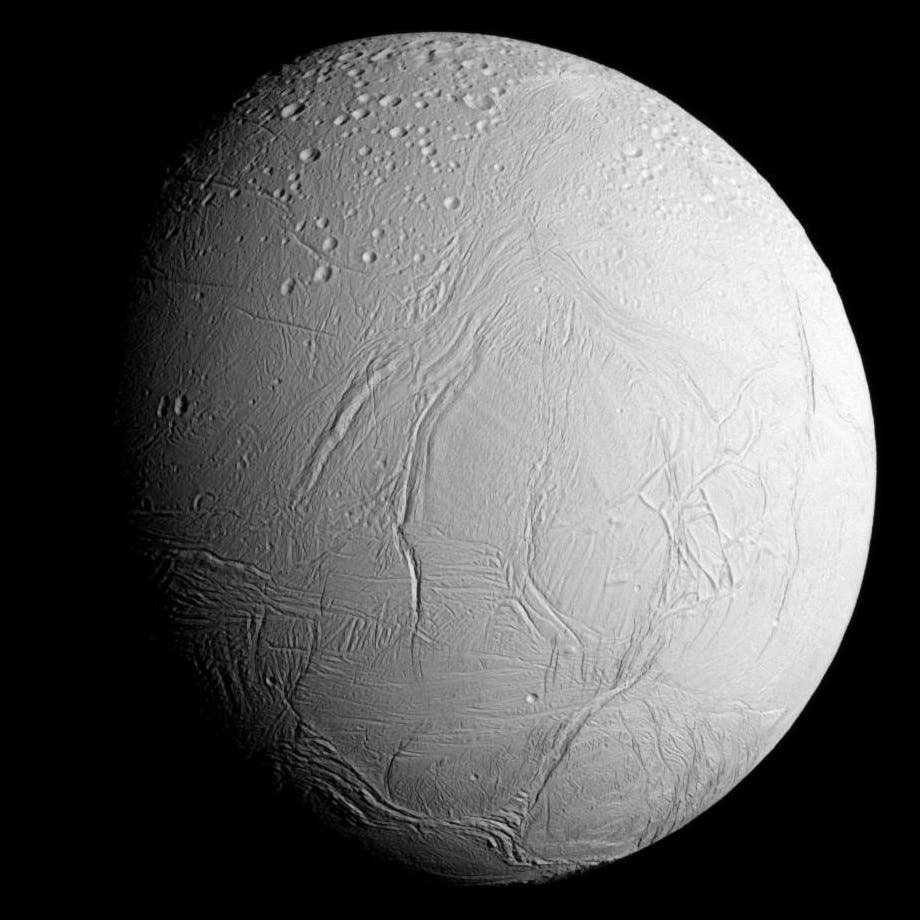 Cryovolcanoes near the south pole eject about 200 kilograms (440 lb) per second, and their ejections include sodium chloride crystals and ice particles. 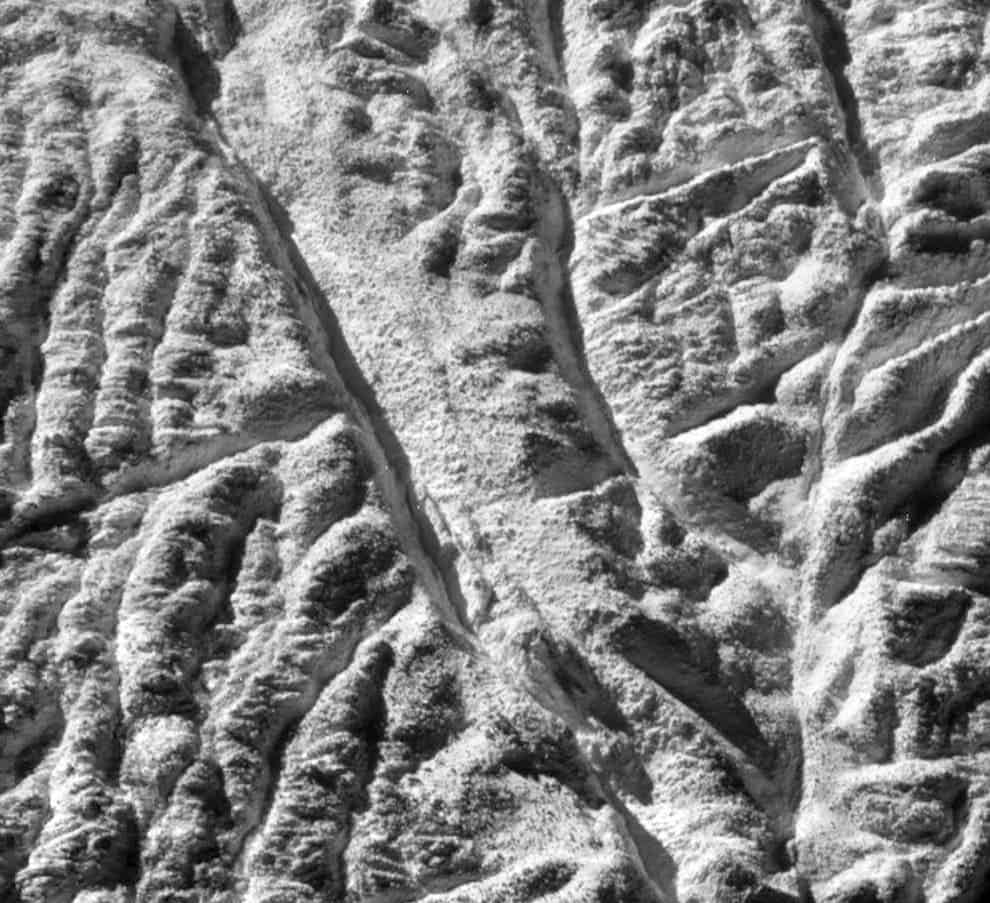 This zoomed-in image of Enceladus again shows highlights the magnificence of Cassini’s work.

Through images like these, Cassini revolutionized our understanding of Saturn and its Moons, surprising astronomers time and time again. Today, thanks to missions like Cassini, we believe that the best place to look for extraterrestrial life may not be Mars, but frozen moons like Titan or Enceladus.