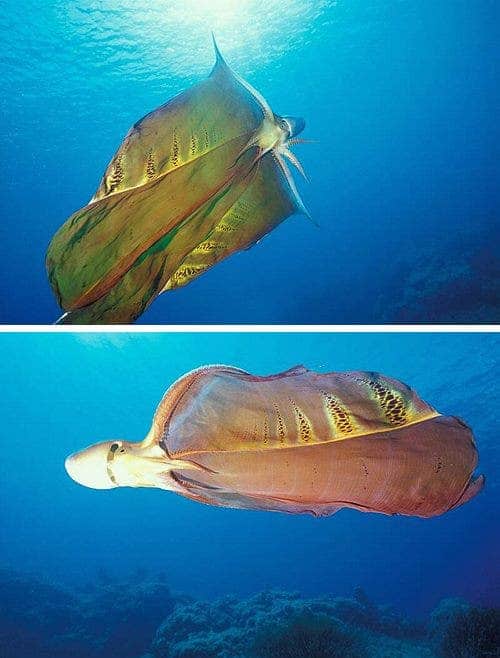 The blanket octopus is truly a remarkable creature. It exhibits extreme sexual dimorphism – while the males are only a few centimeters long, the females grow up to a whopping 2 meters. Unfortunately, they’re rarely seen and studied, so there’s still some mystery about the evolution of this dimorphism, but it’s known that males have a specially modified third right arm which stores sperm. During mating, this third arm dettaches from the body and fertilizes the female.

The blanket octopus got its name due to the fact that they use their body like a cape, to appear larger and scare off potential predators; they just unfurl their large net-like membranes, apparently becoming huge. If that doesn’t work, they can also use ink to intimidate predators. 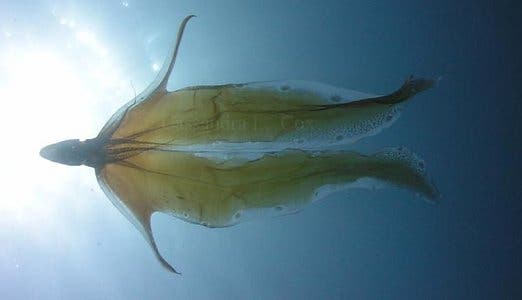 But there’s something else which really makes them amazing. All the way back in 1963, a scientific paper showed that they are immune to the poisonous Portuguese Man o’War, and furthermore, they hunt it, and tear off its tentacles to use them as weapons, both offensively and defensively. Yep, these guys evolved to become immune to the venom of one of the ocean’s most venomous inhabitants, and they are ripping its tentacles to use as whips. Amazing creatures!