Did you know? Prehistoric Art – The Trois Frères Cave

by Mihai Andrei
in Did you know?
Reading Time: 2 mins read
A A
Share on FacebookShare on TwitterSubmit to Reddit

In a cave in France, three bisons stand next to each other, modeled from the clay from the walls of the cave. They’ve been standing there alone for 14,000 years, propped against a small boulder in the darkness. The craftsmanship and durability is remarkable, up to the point where you’d almost think they’re modern; one can only imagine the native talent its creator or creators were gifted with.

Discovered by accident by the three sons of Comte Bégouen in 1914, the cave hosts some of the most spectacular prehistoric art ever discovered. The drawings of the cave were made famous in the publications of the Abbé Henri Breuil, a French Catholic priest, archaeologist and geologist. One painting, known as “The Sorcerer”, depicted below, is one of the most admired and appreciated pieces of art. 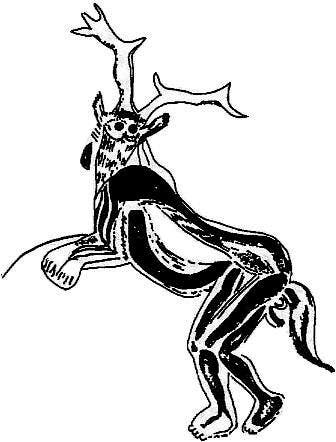 But the Sorcerer isn’t alone – he’s accompanied by many other sketches and drawings, including several birds and a cave grasshopper – portrayed with such fidelity that its species was actually identified.Other human figures can also be seen, including a lions, owls, and bison. Of particular note is a horse and a brown bear that is apparently vomiting blood.

But in a strange coincidence, the Trois Frères Cave is actually divided into three caves: the central Trois-Freres, Enlène to the east, and the Tuc d’Audoubert to the west. Within the latter, there lies the gallery of the bisons. Although they measure only 18 inches tall by 24 inches long (45 by 60 cm), there are among the largest and best preserved prehistoric sculptures. The bisons’ shaggy mane and beard appear to be carved with a tool, but some parts of the sculpture are carved with the artist’s hands and fingernails. Based on all the findings from the cave, anthropologists believe it served very clear ritualistic or shamanistic purposes. They have theorized that a small group of people (including a child) remained in the cave to work on the pieces of art and conduct rituals – though it’s not clear what type of rituals were involved. The remote location of the clay bison, roughly 650 meters from the cave entrance seems to back that theory up.

The cave is located in the central Pyrenees, in southwest France and of course – it’s not visitable for the general public.