The US is definitely facing a dramatic opiates crisis, and it won’t end anytime soon

There's no silver bullet for this problem.

by Contributing Author
in Health & Medicine

Last month, President Trump declared the opioid epidemic a national public health emergency, and for good reason — the US, a country with 5% of the global population, consumes 80% of the world’s pharmaceutical opioids. While laudable, the announcement was, however, lacking in concrete measures, and not much in particular has been done since the announcement. Unfortunately, the crisis seems here to stay.

How it all started

The modern history of opioids, in the US as well as in the rest of the world, starts in 1900, when veterans of the First World War were returning home from overseas. Treatment options were few and far between back then, and there weren’t many options for pain relief. That’s when opioids started to shine. They became a sort of wonder drug, with giant drug company Bayer producing and marketing heroin alongside aspirin. However, it didn’t take long for the scientists of the time to realize that opioids caused addiction. Heroin, for instance, was banned in the US in 1924. Another upward trend emerged during WWII, but opioids remained relatively unknown, and the general population avoided them.

Things changed in the 1970s, as opioids were shown to be heavily abused in the Vietnam War and popular figures such as singers Jim Morrison and Janis Joplin were widely known to be heroin addicts. However, it wasn’t until the 1990s that the problem started to take its current shape. 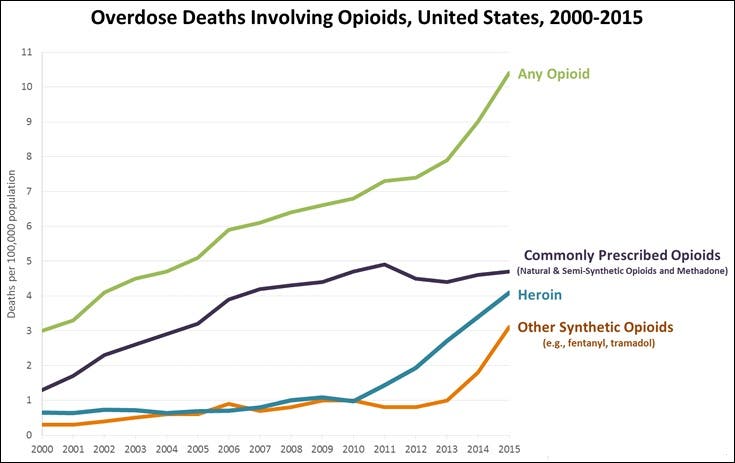 In the latter part of the 1990s, pharmaceutical companies wanted to sell opioids. In a way it’s understandable — they would be making a lot of money from such deals, and the painkilling effect of the drugs is undeniable. But the addiction concerns lingered. Pharma companies reassured the medical community that patients would not become addicted to prescription opioid pain relievers, and healthcare providers began to prescribe them at greater rates. Due in large part to the unique structure of the US health system, this caught on like wildfire. Over-prescription became the norm. As the number of opioid prescriptions rose, drug cartels began flooding the U.S. with heroin. For many opioid users, heroin was cheaper, more potent. Year after year, the problem grew, until it reached epidemic levels.

Now, every day, more than 90 Americans die after overdosing on opioids. The Centers for Disease Control and Prevention estimates that the total “economic burden” of prescription opioid misuse alone in the United States is $78.5 billion a year, including things like treatments and reduced productivity. This is why Trump’s decision is timely, but unfortunately, fails to deliver concrete solutions — especially as he didn’t ask for any additional funds.

In his speech, Trump discussed a wide array of issues concerning the opioid crisis but emphasized that isolating America from Mexico is an important step in his strategy.

“An astonishing 90% of the heroin in America comes from south of the border — where we will be building a wall — which will greatly help in this problem,” he said.

But given that the root of the problem lies with opioids prescribed by doctors in the US, that will only tackle the effect and not the cause. It’s estimated that on average, 21 to 29 percent of patients prescribed opioids for chronic pain misuse them, and up to 6% of them end up consuming heroin.

However, it’s also important to consider that crackdown measures can sometimes have unintended, counterproductive consequences. In 2010, the US government began cracking down on pharmacists and doctors who were over-prescribing opioid painkillers. An unintended consequence of this was that those addicted to prescription opiates turned to heroin, a significantly more potent but cheaper opioid, as a substitute. A 2017 survey in Utah found that 80 percent of heroin users started out with prescription drugs. Also, while media coverage did help raise awareness, it portrayed the issue as a criminal rather than a medical one, which also contributed to the problem.

The bottom line is, the US will need a mix of prevention, helping those already hooked on opioids, finding new treatment alternatives, cracking down on illegal drug suppliers, promoting the use of overdose-reversing drugs, and improving overall awareness of the problem. If it sounds complex, that’s because it is. We need much more than just declaring an emergency state and bragging it.

Opioids are a class of substances that act on opioid receptors in the nervous system — but that’s probably not particularly helpful.

Opioids regulate the pain and reward system in the brain. This makes them extremely powerful painkiller, but it also makes them addictive.

While opioids have a long and complex history, the modern crisis started from overprescription of opioid painkillers in the 1990s. Both illegal drugs like heroin and legal drugs like fentanyl are increasingly problematic.

Drug overdoses are the leading cause of death for Americans under 50, and the number is rising, largely due to opioid consumption. Overdoses killed more people last year than guns or car accidents.

The US is by far the biggest consumer, with 80 of the global pharmaceutical opioid supply. However, Canada has a similar problem, and youth consumption in Europe has also been soaring in recent years.

Of course, but there’s no easy fix. Opioids are a vital component of modern medicine, so we can’t just stop prescribing them. There’s no silver bullet, tackling the crisis will require approaching the problem from different angles. For instance, officials want to use state prescription drug monitoring programs to reduce the supply of prescription opioids that end up being used recreationally. At the same time, it’s also important to have treatment options for those who are already addicted, and finding treatment alternatives for opioids. A recent study found that a cocktail of Advil and Tylenol, two non-addictive over the counter drugs, can be just as effective as opioids in dealing with pain.

It doesn’t do much in itself, but it gives the secretary of health and human service broad authority, including to amend a variety of health regulations and conduct investigations. While the secretary now has these increased powers, it remains to be seen what will be done with them.

Almost certainly no. It’s hard to foresee how the situation will develop, but considering current trends, which show a growth rather than a decrease in opioid consumption, it seems safe to say that the problem won’t go away in the near future. However, if we ever want to end it, we need to start taking active measures now and not later.