Painkiller abuse leads to first rise in U.S. death rate in a decade

The United States, a nation who's used to reporting lower mortality ever year, had a larger death rate in 2015 compared to the previous year. This was the first time in ten years and the third time in 25 years.

by Tibi Puiu
in Diseases, Health & Medicine, News
Reading Time: 3 mins read
A A
Share on FacebookShare on TwitterSubmit to Reddit

The United States, a nation who’s used to reporting lower mortality ever year, had a larger death rate in 2015 compared to the previous year. This was the first time in ten years and the third time in 25 years that this happened. The Centers for Disease Control and Prevention says deaths caused by painkiller overdose, suicides and Alzheimer’s were mostly responsible for the slight increase in death rate. 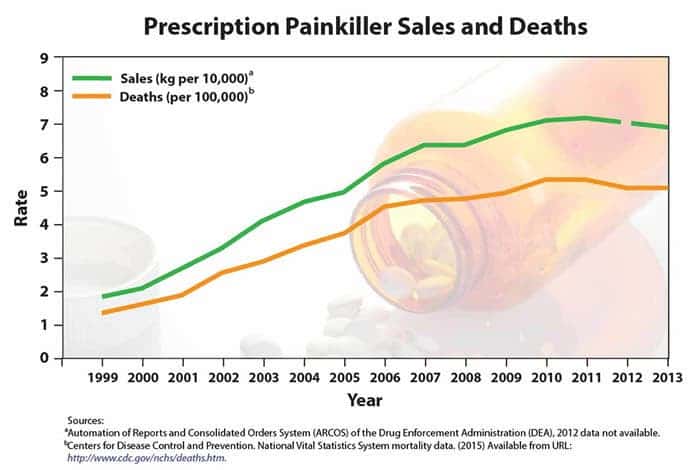 The death rate — measured as the number of deaths per 100,000 citizens — rose to 729.5 in 2015, from 723.5 in 2014. The leading causes of death are heart disease, cancer and chronic respiratory disease, in this order. Advances in medicine have drastically brought down the death rates for these diseases over the last couple of decades. Last year, however, the death rate for heart disease flatlined, meaning we’re close to maxing the medical benefits. The low-hanging fruit has been picked dry. Meanwhile, drug-related deaths have increased tremendously.

Fatal overdoses due to painkillers have reached epidemic levels, greatly exceeding those from heroin and cocaine combined and becoming the worst drug epidemic in US history. Prescriptions for painkillers in the United States have nearly tripled in the past two decades, and the results are dreadful. In 2012, enough painkillers were prescribed to keep every single citizen medicated around the clock for a month – or once every 12 days for an entire year.

The death rate from suicides rose to 13.1 in the third quarter of 2015, from 12.7 in the same quarter of 2014. Alzheimer’s death rate also rose to  29.2 in 2015, compared with 25.4 in 2014. For Alzheimer’s at least, the CDC says both better reporting in the death certificate and a genuine increase in dementia-related death are to blame for the rise.

The current report issued by the CDC is still in its preliminary phase. In the coming weeks, a detailed report will be released, one where we’ll be able to learn, for instance, which groups are most vulnerable in the face of risk factors like drug abuse. A previous report, not connected with the CDC, found a pattern of rising mortality among working-class whites with no more than a high school diploma.