Using origami, scientists are making the smallest surgical tools yet

Mechanical engineers at Brigham Young University are combining the versatility of origami with mechanical know-how to produce the smallest surgical tools.

by Tibi Puiu
in Health & Medicine, News, Technology
A A

Mechanical engineers at Brigham Young University are combining the versatility of origami with mechanical know-how to produce the smallest surgical tools. Their spatial resolution is so large that soon we could make incisions so subtle that they heal themselves, without sutures. All of this without compromising surgical quality.

“The whole concept is to make smaller and smaller incisions,” said Larry Howell, a mechanical engineering professor at Brigham Young. “To that end, we’re creating devices that can be inserted into a tiny incision and then deployed inside the body to carry out a specific surgical function.”

The traditional way of going about making surgical tools has been the same for centuries, and right now the industry has reached its limits as far as miniaturization is concerned. By relying on the deflection inherent in origami to create motion, BYU researchers have eliminated key parts previously thought indispensable like pin joints. One day, these sort of origami-inspired tools could become so sensitive that things as small as nerves could be manipulated.

One  robotically-controlled forceps developed at BYU can pass through a whole just 3 millimeters in size. Another device, called the  D-Core, starts off flat then expands to two rounded surfaces that roll akin to spinal disc motion.

Considering how small the tools are, and consequently the incisions made, humans are also stressed to their limits. That’s why BYU is working closely with companies like Intuitive Surgical, the makers of the da Vinci Surgical System — a surgical robot. We previously showed readers how precise da Vinci can be as the machine stitched a grape. “The origami-inspired ideas really help us to see how to make things smaller and smaller and to make them simpler and simpler,”  said Spencer Magleby from BYU. 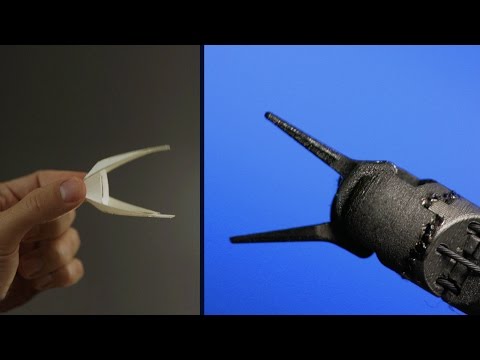