Scratching makes Itching Worse: the Molecular Mechanism behind the Itch

by Tibi Puiu
in Anatomy, Health & Medicine, News, Psychology
Reading Time: 4 mins read
A A
Share on FacebookShare on TwitterSubmit to Reddit

Seems like your mom was right all along: scratching does, in fact, makes the itching worse. This was the conclusion reached by a group of researchers at Washington University School of Medicine in St. Louis after the scientists studied the molecular and neural pathways that cause and relieve itching. The findings suggest that scratching releases serotonin – a key neurotransmitter involved in controlling pain and depression – which actually intensifies the itching sensation. The researchers believe that now that they’re armed with this new found knowledge, they might be able to break the vicious itch-scratch-more itching cycle and develop working treatments for those suffering from chronic itching.

For decades, researchers have known that there’s a well established relationship between pain and itching. When you scratch an insect bite or wound the immediate response is pain, a sensation which is transmitted through the spinal chord to the brain and which temporarily replaces the feeling of itchiness. This is intuitive, yet now researchers have proven that this temporary relief is followed by a more itch intensive relapse caused by pain-inducing serotonin.

“The problem is that when the brain gets those pain signals, it responds by producing the neurotransmitter serotonin to help control that pain,” said Zhou-Feng Chen, PhD, director of Washington University’s Center for the Study of Itch. “But as serotonin spreads from the brain into the spinal cord, we found the chemical can ‘jump the tracks,’ moving from pain-sensing neurons to nerve cells that influence itch intensity.”

Chen and colleagues bred a strain of mice that lacked the ability to produce serotonin, then injected them with a substance that caused itching on parts of their skin. The researchers found that the engineered mice were less prone to scratch as their normal, serotonin-producing littermates. When the genetically altered mice were injected with serotonin, they scratched as mice would be expected to in response to compounds designed to induce itching.

[ALSO READ] The key to patience lies with serotonin

“So this fits very well with the idea that itch and pain signals are transmitted through different but related pathways,” said Chen, a professor of anesthesiology, of psychiatry and of developmental biology. “Scratching can relieve itch by creating minor pain. But when the body responds to pain signals, that response actually can make itching worse.” 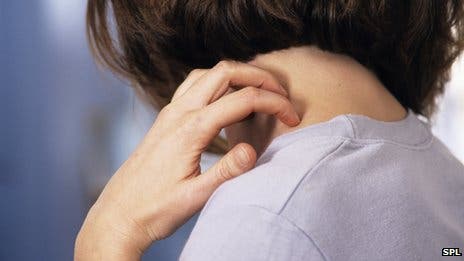 By this point, the researchers had proven there was a clear relationship between serotonin and more itching, yet they wanted to refine the mechanism. The nerve cells in the spinal cord that specifically transmit the itch are called GRPR neurons. Whenever you scratch your skin, these neurons activate and communicate with brain neurons and Chen and team decided to isolate the receptor used by serotonin.

The team injected mice with a substance that causes itching, along with compounds that activated various serotonin receptors on nerve cells. Ultimately, they learned that a receptor known as 5HT1A was the key to activating the itch-specific GRPR neurons in the spinal cord. When a compound that blocked the receptor was given, the mice scratched less. This final insight is of the greatest importance since it offers a way to break the itch-scratch cycle. Blocking serotonin altogether is a bad idea – it’s key to our mental functioning. Blocking a specific receptor involved in itch and pain relay in the spinal chord is much more feasible, however.

“We always have wondered why this vicious itch-pain cycle occurs,” Chen said. “Our findings suggest that the events happen in this order. First, you scratch, and that causes a sensation of pain. Then you make more serotonin to control the pain. But serotonin does more than only inhibit pain. Our new finding shows that it also makes itch worse by activating GRPR neurons through 5HT1A receptors.”

Until ‘smart’ anti-scratch pills hit the market, though, you better stay clear of scratching. It will only make it worse – listen to your mom!