The wild poliovirus is about to go extinct. In 2015, only 74 new cases were reported or 80 percent less than in 2015. Furthermore, these cases were contained in two countries: Afghanistan and Pakistan.

by Tibi Puiu
in Health & Medicine, Mind & Brain, News
Reading Time: 3 mins read
A A
Share on FacebookShare on TwitterSubmit to Reddit

The wild poliovirus is about to go extinct. In 2015, only 74 new cases were reported or 80 percent less than in 2015. Furthermore, these cases were contained in two countries: Afghanistan and Pakistan. Next year, wild polio could disappear from the face of this planet, a milestone achievement in medicine.

There are three types of wild poliovirus: WPV1, WPV2 and WPV3. Only WPV1 is considered still at large in the world, the other two having been eradicated.

It looks like it won’t be long until WPV1 is out of the picture completely, too. There were only 15 new cases of polio this year reported until May 4, 12 of which were WPV1 and the other three were vaccine-derived (a strain from Laos).

Judging by this trendline, it seems like WPV1 could become extinct as soon as 2017. There’s a three-year waiting period before a virus can be considered extinct, so effectively polio might be eradicated by 2020.

“With progress made during 2015–2016 toward interruption of WPV transmission in Afghanistan and Pakistan, the world is closer than ever to the eradication of polio. Continued cooperation between the two countries is needed for this goal to be reached. In addition, the greater worldwide community needs to remain vigilant in implementing the Global Polio Eradication Initiative’s Polio Eradication and Endgame Strategic Plan for 2013–2018 to end WPV and VDPV transmission,” CDC researchers write in a report.

Polio (will be) history

Polio has existed for at least as long as humanity has, but only since the Victorian times did it become a major health hazard. The disease, known as poliomyelitis, causes spinal and respiratory paralysis, can kill and is incurable.

The disease is highly infectious, spreading by direct contact between people. Contact with nasal and oral secretions, as well as contaminated feces, is how patients get polio in the first place most of the time. The virus enters the mouth, multiplying along the way to the digestive tract, where it further replicates.

Throughout history, there were a number of outbreaks. For instance, in 1916, New York reported 9,000 cases and 2,343 deaths. In 1952, the U.S. experienced a record 57,628 cases. Most people, particularly children, recover from polio, but many survivors became disabled for life.

Since polio is incurable, prevention is the only way to contain the disease. The big breakthrough came in 1952 when Dr. Jonas Salk developed the first effective vaccine against the virus. Mass public vaccinations swiftly followed and the effects didn’t wait to show: in the US alone cases fell from 35,000 in 1953 to 5,300 in 1957.

By 1988, polio had disappeared from the US, UK, Australia and much of Europe but remained prevalent in more than 125 countries. In 1994, the last wild polio case was recorded in the Americas region. In 2012, polio remained endemic in only four countries: Afghanistan, Pakistan, India and Nigeria. In 2015, Nigeria and India were scratched from the list.

[YOU SHOULD KNOW] For every dollar spent, vaccines offer a return of $44

This is one of the most successful stories in medicine, ever. Which is why I’m always flabbergasted by those who claim that vaccines don’t work or, most assinine, that they’re a ploy to infect the youth and destroy humanity. In Pakistan, the most hateful anti-vaxxers aren’t brainwashed soccer moms, but religious fanatics who claim polio vaccines are  “conspiracy of Jews and Christians to make Muslims impotent and stunt the growth of Muslims.” Since June 2012, 54 health workers and security personnel who were aiding in an anti-polio campaign in Pakistan were killed by the Taliban who have a ban against the ongoing vaccine program.

Polio cases have decreased by over 99% since 1988, from an estimated 350 000 cases to 15 in 2016. What more proof do you want? There’s a vaccine for ignorance, too. It’s called education. Hopefully, those who have second thoughts about vaccines might be swayed in a more sensible position after they read about it. 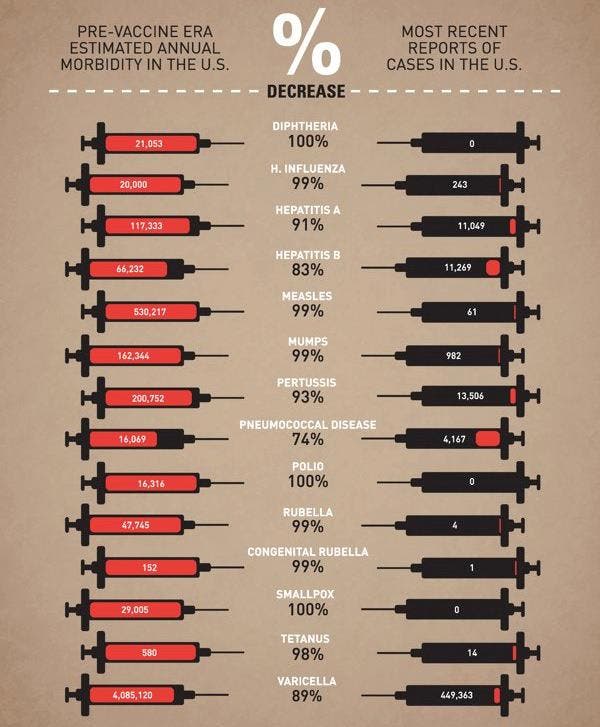