The Brain in 3D for the first time 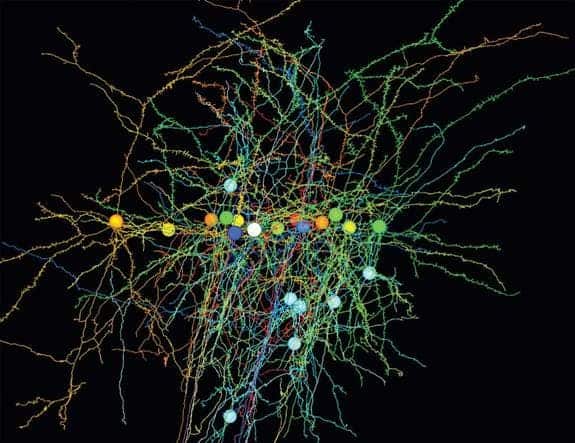 For the first time in modern history, researchers have managed to reconstruct a three dimensional circuit of connected cells in the brain, thus offering insight in how it works; the model, which was built using microscopes and a supercomputer offers a novel insight and an unprecedented opportunity to discover how the complex mechanism of the brain “navigates”, pretty much the same way Google or other search engines crawl through the Web.

The research, published by two separate teams in Nature and it tackles the problem of brain functionality in ways that traditioal studies just can’t; one team was led by neurobiologist Clay Reid of Harvard University, while the other was headed by Winfried Denk at the Max Planck Institute for Medical Research in Heidelberg, Germany. The good thing is that it can give answers about brain cells, but only answers in the line of “what are they doing”, while “how exactly they are doing it” remains totally unanswered.

“Cortical circuits are very big, and so far we’ve been looking at networks of cells wired two cells at a time, or a handful of connections at a time,” Reid told LiveScience. “This combination of techniques gives us the hope that in the coming decade we’ll be able to look and see the physiology of literally every cell in a local network.”

Recent progress in technology, data collection and processing, and even graphics made this study possible, and further advancements will allow it to advance even further, probing hundreds or thousands of neurons, Reid said. “That’s when it really will get interesting: when we have a much bigger and more densely connected network.”

“This study is not the last word,” Reid added. “It’s very much the first attempt at something that’s very exciting that we hope will give a lot of answers in the coming years.”.