Micro-vehicles move through a mouse stomach, healing its ulcers

The future is here.

Tiny robots could soon be delivering drugs throughout your body (no, not those kind of drugs).

For the first time, researchers have used tiny vehicles, each about half the width of a human hair, to administer a dose of antibiotics daily for five days. At the end of the treatment, they reported that it was much more effective than just taking antibiotics orally.

“The movement itself improves the retention of antibiotics on the stomach lining where the bacteria are concentrated,” says Joseph Wang at the University of California San Diego, who led the research with Liangfang Zhang. 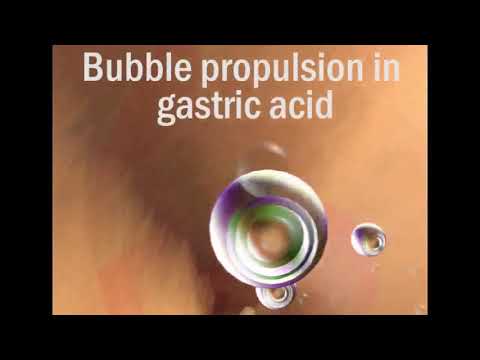 The vehicles are basically spherical magnesium cores coated with several different layers. They’re designed so that they’re protected from the stomach’s gastric acid but also stick to stomach walls. Perhaps the most creative part is how they move around. When the cores react with the gastric acid, they create a stream of hydrogen bubbles that pushes them around.

This process also reduces the overall acidity of the stomach, which makes the antibiotics more efficient.

Without this reduction, a part of the antibiotics is destroyed before it even gets a chance to do anything. The stomach acidity is restored to regular levels after 24 hours. The tiny spheres are also mostly built from biodegradable materials which decay without leaving anything behind.

“It’s a one-step treatment with these micromotors, combining acid neutralisation with therapeutic action,” says one of the researchers, Berta Esteban-Fernández de Ávila.

Researchers tested the technology once mice infected with Helicobacter pylori, a bacterium found usually in the stomach linked to the development of duodenal ulcers and stomach cancer. After the treatment, they evaluated the bacterial count in each mouse stomach, finding that it was slightly but significantly more efficient than the conventional way of delivering antibiotics.

The study was praised by external scientists.

“It’s a really nifty and impressive application. Micromotors are still new, but their impact will be big,” Thomas Mallouk at Pennsylvania State University told New Scientist.

In theory, this could be used for a variety of treatments, but researchers caution that this is still early days of the technology. This is more about opening doors for future studies rather than having a viable technology today or tomorrow.

For the future, they will try different drug combinations with different type of micromotors to test their efficiency in the gastrointestinal tract.