Finding medical inspiration from a porcupine

by Mihai Andrei
in Biology, Health & Medicine
Reading Time: 2 mins read
A A
Share on FacebookShare on TwitterSubmit to Reddit

If you ever been unlucky enough to feel the wrath of a porcupine, then you’ve probably noticed two things: it hurts like hell, and the quills are really hard to pull out. But don’t be mad – something really good could come out of your pain. Researchers at MIT and Brigham and Women’s Hospital now hope to exploit the porcupine quill’s unique properties to develop new types of adhesives, needles and other medical devices. 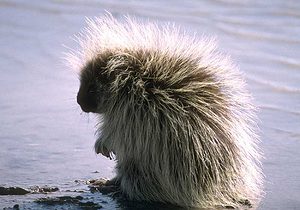 In a new study, they analyzed for the first time the forces needed for the quill to enter and exit the skin. They then created artificial devices with the exact properties, raising the possibility of designing less-painful needles, or adhesives that can bind internal tissues more securely.

There’s really a big need of these adhesives in medicine, especially for people who have undergone surgeries such as a gastric bypass or other types of gastric or intestinal surgery; at the moment, the incisions are sealed with sutures or staples, which can leak and don’t always work as good as planned.

So once again, researchers took inspiration from nature, finding out that while the quills take a lot of force to pull out, they penetrate the skin with relative ease. Compared to quills with no barbs, the barbed quills require about 50 percent less force to penetrate muscle tissue.

“By understanding the mechanism, we can design an artificial system in the right way,” Woo Kyung Cho, study author, explains.

The next step is to work on quill-inspired adhesives from biodegradable materials, which could be broken down inside the body after they are no longer needed.