Leg ulcers are nasty problems – and hard ones to get rid of. Now, according to a team of Canadian and American doctors, spraying leg ulcers with a mixture of skin cell mixture may speed up healing, even for nasty cases. 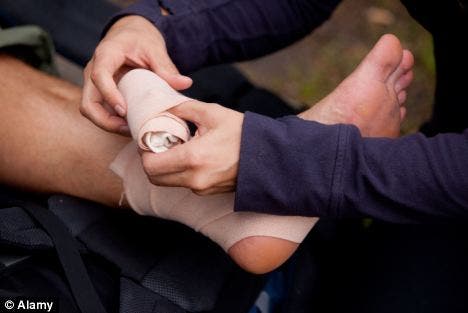 Typically, such ulcers develop when high blood pressure in the veins from the legs damages the skin, causing it to practically break down, thus forming an ulcer. Chronic ulcers last even more than a couple of years on average, and they are the major cause of chronic wounds, occurring in 70% to 90% of chronic wound cases. As you can probably guess – an ulcer can really hurt.

In Friday’s issue of The Lancet, the team explained that spraying skin cells suspended in a mixture of proteins that aid blood clotting helped to heal wounds faster and increased the likelihood of wound closure compared with a control group that used classical treatment in the form of bandages. The participants were adults who had at least one ulcer at least 2 square centimeters that lasted for at least six weeks.

Patients were assessed for 12 weeks or until the wounds fully closed – and the results seemed conclusive. After applying the lowest recommended dose for 14 days, the average reduction of the would was 40 percent, compared with the 23 percent for the placebo group. By the end of the study, the wound area shrank by 91 percent. However, compression bandages will remain the standard treatment for venous ulcers, but in the bigger, harder to heal cases, this more expensive yet more effective treatment will probably play a significant role.