by Tibi Puiu
in Health & Medicine, Other 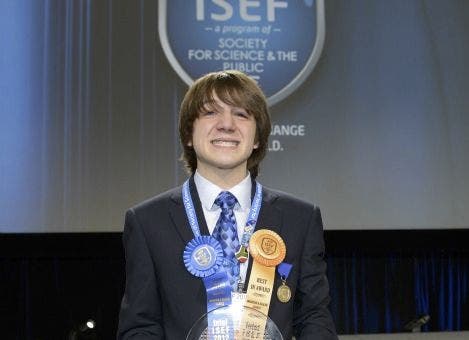 Jack Andraka is in his sophomore high-school year, but while other kids his age might be preoccupied with fighting puberty, the 15-year-old is fighting cancer. He has devised a pancreatic test kit that costs only three cents, requires only a drop of blood, is non-invasive and has a formidable success rate. Not only this, but the test detects the cancer in its incipient form, while other test kits developed in million dollar research labs only detect it in its advanced form, thus making the disease treatable, potentially saving millions of lives.

For his invention, Adraka was awarded the prestigious Gordon E. Moore Award by Intel –  the world’s largest high school research and science competition. Basically, his kit consists of  a simple dip-stick sensor to test for levels of mesothelin, which is a biomarker for early-stage pancreatic cancer that’s found in blood and urine, highly analogous to current diabetes testing strips.

The spark came as a result of the frustrations that come from the harsh reality of life, after a close family member died of pancreatic cancer. During an epiphany at his high-school science class, the idea for the kit struck him, and the rest is history. What’s interesting is that, apart from being one of the cheapest medical devices in history, the test kit has an astonishing success rate. Current non-invasive tests used to identify pancreatic cancer can only detect it in its final stages, which is why  the American Cancer Society reports that on average, the one-year survival rate for a patient is just 20 percent, and the five-year rate is a dismal four percent. A heartbreaking statistic that currently amounts to 100 deaths due to pancreatic cancer each day.

Jack Andraka’s award winning invention, however, can catch the disease during its incipient forms, too. This translates into a dramatic increase in survival rates, edging them “close to 100 percent” according to Andraka. Moreover, Andraka claims that the kit can be adjusted to indentify other cancer cells or diseases like tuberculosis, HIV, environmental contaminants like E Coli, salmonella, he says. “All for three cents for a test that takes five minutes to run.”

Talent and intelligence weren’t enough to bridge his invention to the public, however. Before he reached the right people willing to listen, Andraka appealed and was rejected by 197 scientists. Only one person said yes – Dr. Anirban Maitra, a professor of pathology and oncology at Johns Hopkins University, who also became Jack’s mentor.

Again, this is a phenomenal display of wit, talent and awareness of what really matters in the world – all from a 15-year-old. Shall we etch a discussion on the importance of science in American schools now?