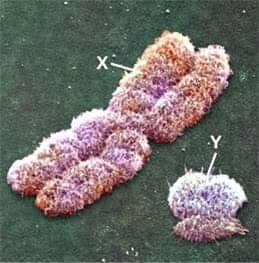 Good news for men, and especially women: the Y chromosome, which holds the male sex determining genes in most mammals, including humans, is not going extinct, as some claim, as a new research found that the diminishing gene numbers have come to a halt and will remain this way.

Sex chromosomes come in pairs, such men have X-Y and women have X-X. Around 320 million years ago when the first Y male determining chromosome appeared, both the X and Y chromosomes had roughly the same number of genes, actually sharing 800 genes. In time, the Y chromosome has lost 1,393 of its 1,438 original genes over the course of its existence. With a rate of genetic loss of 4.6 genes per million years, the Y chromosome may potentially lose complete function within the next 10 million years, or so some scientists claim. Currently, the human Y carries a mere 19 of its ancestral genes shared with the X chromosome, out of a once 800 strong, bringing the total number of genes in the human Y to 27.

This would mean that in a few million years, the world would be dominated by women alone, leaving only artificial reproduction as an exclusive option – highly practical, not all that fun. Fear not, for Jennifer Hughes at the Whitehead Institute for Biomedical Research in Cambridge, Massachusetts, along with colleagues, have found that the Y chromosome is here to stay.

The researchers sequenced the Y chromosome of the rhesus macaque, a very close relative of humans, from which it diverged paths some 25 million years ago. It was found that the monkey’s Y has 20 genes shared with its X, of which 19 are shared with the human Y. This suggests that the human Y chromosome has lost only one gene since humans and macaques last shared a common ancestor. The research, thus, provides direct evidence that the linear extrapolation model is flawed.

“We finally have empirical data that the Y chromosome has held steady over the last 25 million years,” says Hughes. “Most of the Y chromosome’s gene loss happened almost immediately after it stopped recombining with the X chromosome.” The 19 surviving genes probably have vital biological functions, she says, and so aren’t going anywhere anytime soon.

The research was published in the journal Nature. Image credit.