by Tibi Puiu
in Genetics, Studies
Reading Time: 2 mins read
A A
Share on FacebookShare on TwitterSubmit to Reddit 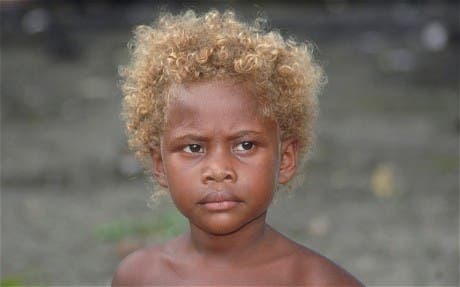 Skin and hair color are most inherited from parents, and usually hint pretty accurately to a person’s ethnicity. Dark skin and hair are most common in the regions around the Equator, however natives of the Solomon Islands, an archipelago east of Papua New Guinea, seem to defy common expectations, as around 10% of the population here has strikingly natural blond hair, despite being dark skinned.

An explanation for this rather atypical occurrence has been attempted in the past, ideas ranging from excess sun exposure, to the fish-rich diet, to ultimately the plausible blond hair genetic inheritance from European traders and explorers. Now, even the latter explanation has been debunked after researchers at Bristol University have found that the gene responsible for blond hair in the islanders is unique to any other genome in the world.

“For me it breaks down any kind of simple notions you might have about race,” said Carlos Bustamante, a geneticist at Stanford University. “Humans are beautifully diverse, and this is just the tip of the iceberg.”

The researcher analyzed saliva samples from more than 1,000 islanders, looking closely at a subset of the samples — from 43 blond and 42 dark-haired islanders. Looking at the data, the researchers have identified the single genetic mutation that causes the islanders to have such contrasting pigmentation of their skin and hair. A variation of the TYRP1 gene, typically responsible for influencing pigmentation in humans, is what causes blond hair in Solomon Islanders, as described in the journal Science.

Dr Nic Timpson, one of the leaders of the project, said: “Naturally blond hair is a surprisingly unusual trait in humans which is typically associated with people from Scandinavian and Northern European countries.
“Whether this genetic variation is due to evolution or a recent introgression (the introduction of a new gene from another population) requires further investigation, but this variant explains over 45 per cent of the variance in hair colour in the Solomons.”