PMS may have evolved to disrupt infertile relationships

by Tibi Puiu
in Genetics, Health & Medicine, News
A A 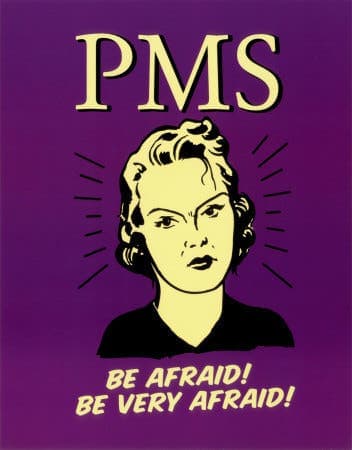 A brave Australian professor of molecular biology thinks he may have found out  why women get premenstrual syndrome (PMS). According to his findings, following genetic screenings, PMS has evolved as a mechanism for breaking up infertile relationships and thus increase the chance of fostering a fertile relationship in the future. Effectively, nature designed PMS to give men hell. As a male, I salute this effort. I’ll leave you to Sun Tzu: “know your enemy and know yourself and you can fight a hundred battles without disaster”.

“In the past, women had many fewer menstrual cycles than women in modern societies, because they did not have control over reproduction and were either pregnant or breastfeeding most of the time,” said lead author Michael Gillings.

“Imagine that a woman was pair bonded with a sterile or infertile male. Then, even in the past, they would have had regular cycles. If women in these relationships exhibited PMS and this increased the likelihood of the pair bond dissolving, this would be a huge reproductive advantage.”

“This simple phenomenon might explain the frequency of PMS. There are various lines of evidence from DNA and behavioural studies that confirm this idea.”

Every month, like clockwork, some women experience a collection of symptoms that make them  irritable or likely to snap at their family and friends without the slightest provocation. So what is PMS? Well, some call it ‘that time of the month’ when women are free to eat all the chocolate they want, and god help you if you interfere! From a medical point, doctors consider PMS to be a real physiological condition triggered by a set of hormonal changes. PMS generally occurs between 7 to 14 days before menstruation, time in which symptoms ranging from anger and irritability, to abdominal cramping and breast tenderness, to food cravings can occur.

Gillings analyzed scientific literature and found that PMS, which affects 80% of women, is highly genetically inheritable and gene variants associated with PMS can be identified. An important tidbit is that data suggests animosity exhibited during PMS is preferentially directed at current partners. This has led Gillings to formulate his hypothesis that PMS is actually an evolutionary mechanism designed to terminate infertile relationships.

“Under this view, the prevalence of PMS might result from genes and behaviours that are adaptive in some societies, but are potentially less appropriate in modern cultures,” said Michael.

“Understanding this might help the management of PMS and will help change attitudes, for example, towards cycle-stopping contraception. PMS is a simple and natural behaviour that arose as a consequence of our evolutionary past.”

Gillings theory was outlined in a paper published in the journal Evolutionary Applications.