by Tibi Puiu
in Health & Medicine, Psychology
Reading Time: 2 mins read
A A
Share on FacebookShare on TwitterSubmit to Reddit 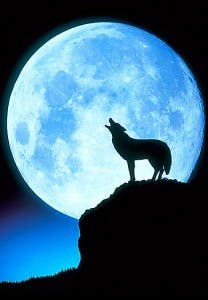 There’s an age old myth that as the moon lights bright and fills the night sky, some people simply stop being themselves. No, I’m not referring to werewolves. After all, some scientists actually thought this was actually worth investigating. As one might expect, no connection between the phases of the moon and psychological disorders has been found.

Researchers at Université Laval evaluated patients who visited emergency rooms at Montreal’s Sacré-Coeur Hospital and Hôtel-Dieu de Lévis between March 2005 and April 2008. More specifically, the scientists decided to tackle cases whose symptoms couldn’t be pointed to an exact medical cause.

Correlating the days of hospitalization with the lunar calendar, analyses revealed no link between the incidence of psychological problems and the four lunar phases. With one exception, but don’t get too excited over this – anxiety disorders were 32% less frequent during the last lunar quarter.

“This may be coincidental or due to factors we did not take into account,” suggested Professor Geneviève Belleville of Université Laval’s School of Psychology . “But one thing is certain: we observed no full-moon or new-moon effect on psychological problems.”

What’s intriguing and, for me at least, hilarious at the same time is that upon interviewing the two hospitals’ staff, the researchers found that 80% of nurses and 64% of doctors were convinced the phases of the moon affected their patients’ mental health.

“We hope our results will encourage health professionals to put that idea to rest,” said Dr. Belleville. “Otherwise, this misperception could, on the one hand, color their judgment during the full moon phase; or, on the other hand, make them less attentive to psychological problems that surface during the remainder of the month.”

Findings were reported in the journal General Hospital Psychiatry.