Everything you wanted to know about homeopathy but never asked

by Mihai Andrei
Reading Time: 9 mins read
A A

Last week we described a study which concluded that homeopathy is nothing more than a placebo effect — it was just one of the many scientific studies which found the same thing. But many people swear by homeopathy and, judging from what’s happening in the comment section and our inbox, they feel very strongly about it. So let’s take a step back, analyze what’s happening with homeopathy, and then we can all our own conclusions.

The mechanism behind homeopathy

Homeopathy is a system of alternative medicine proposed in 1796 by Samuel Hahnemann, based on his doctrine of “like cures like”. Essentially, the belief is that the same thing which makes you sick can be used to heal you. Hahnemann believed that all diseases are caused by miasms, and homeopathy can be used to eliminate them. Not familiar with the term? Probably because it’s long been disproven.

Truth be told, not all homeopaths today believe in the so-called miasm theory — but all homeopathy is based on like-cures-like — using “active substances” to address all sorts of problems.

These active substances are things which cause symptoms similar to that of a disease, in the belief that if the body recognizes the symptom, it will start to fight the real disease. But it has to be diluted — a lot.

Hahnemann has this idea that undiluted doses intensify the symptoms and exacerbate the condition, sometimes causing dangerous toxic reactions. He specified that the substances be diluted due to his belief that succussion activated the “vital energy” of the diluted substance and made it stronger.

So the proposed cures are prepared by dilution. You take the active substance (whatever that may be) and usually dilute it by putting one drop of it in 1 liter of alcohol or distilled water, and then you mix it. After the mixing, you take 1 drop of this newly obtained substance and put it in another fresh liter of alcohol or distilled water, rinsing and repeating the process many times, until well past the point where none of the original molecules remain. The more diluted the substance is, the more effective the “cure” will be. The idea is that the alcohol or distilled water will somehow “remember” the molecule and have an impact on your body. Right of the bat, this goes directly against basic science — not something a pharma company or another is saying but against well-established, basic medical (and chemical) science.

But wait, you’ll say, how can you be sure that there is no more molecule in the substance? Well, we’ll have to get a little familiar with Avogadro’s number. Avogardo was a brilliant chemist (not related to homeopathy in any way). He showed that for every mole (unit of substance) of a substance, there are 6.02214129(27)×1023 constituents (atoms or molecules). For example, in a mole of OH, there are 6.02214129(27)×1023 molecules of OH – and the same goes for every substance. Let’s not get into how he arrived at that conclusion as that’s a different discussion, but his number is one of the very foundations of modern chemistry.

So if you have a substance and you dilute it up to the point where its concentration starts to outweigh Avogadro’s number, you end up with no more molecules of the initial substance. Say, if you take a gram of a substance and you put it in a kilogram (1000 grams), the concentration will be 10-3. If you take a gram of the new substance and put it in another fresh kilogram, it will be 10-6 and so on. If you do this 8 times, you reach a concentration of 10-24, which outweighs Avogadro’s number — and that’s when you don’t have any more molecules of the initial substances. Homeopathy often goes way past that number, and there’s just nothing left in to have an effect — even if you assume that the method works.

But does the method really work?

What science says about homeopathy

There is little room for discussion or interpretation here — although there’s been no lack of trying. Study after study has tried to find evidence or even just a workable mechanism for homeopathy, but they’ve found the exact opposite. There’s no mechanism behind homeopathy, and there’s no effect past a placebo.

If this was the case, and water did have a “memory,” we would have to rewrite all of science as we know it. Even ignoring the centuries of scientific research disproving homeopathy, a simple thought experiment can show go a long way when it comes to the process.

Just imagine: in its history, water will have contacted literally millions of other substances, and by this thought process, it has a memory of all of them — so just drinking a glass of regular water should make you immune to a swarm of diseases, right? So then why even have homeopathy — water is naturally diluting all sorts of things, so we should kind of be immune to everything, right?

Lastly, even if there were any active substance, and even if water would have a memory, something that causes symptoms similar to the X disease doesn’t cure X disease. That’s just wishful thinking, and there is nothing to suggest that this works. The scientific consensus is pretty strong on this case. Here are just a few studies:

So why does it seem to work?

OK, but by quoting some of the common responses, lots of people still stand by homeopathy. You often hear things like “This worked for me”, “It worked for millions of people”, and “How can you say it doesn’t work?” Well, here are some of the reasons why homeopathy may appear to work:

a) unassisted natural healing – Your body is awesome at self-healing. Some people are more resilient than others, but generally speaking, your body heals itself all the time. It can eliminate even strong diseases on its own.

b) the placebo effect – Simulated treatments are surprisingly effective in many cases. Combine this with your self-healing, and you get quite a powerful tool.

c) the consultation effect – Modern research has shown that if you just go to the doctor and receive a consultation, the care, concern, and reassurance a patient experiences when opening up to a compassionate caregiver (read: homeopath) can have a positive effect.

d) unrecognized treatments – An unrelated food, exercise, environmental agent, or treatment for a different ailment may have occurred. Maybe you drank a lot of green tea, or that trip to the ocean did wonders for your lungs.

e) regression towards the mean – Many diseases and conditions are cyclical — the symptoms get naturally stronger and weaker in time. Since patients tend to seek care when discomfort is greatest, it’s pretty likely that the symptoms will naturally get weaker.

f) cessation of unpleasant treatment – Many times, homeopaths recommend the ceasing of conventional treatments — this is extremely dangerous and should never be done without consulting an actual medical doctor. Oftentimes, the conventional treatment causes some unpleasant side effects, perhaps even more so than the disease’s symptoms. When you stop taking the treatment, the side effects may go away, but the disease remains and gets.

But even so, what harm can homeopathy actually do?

You may try to go for a win-win strategy, and take both conventional treatments and homeopathic treatments — what have you got to lose, right? Well, technically, nothing. Homeopathy doesn’t do anything bad because, well, it doesn’t really do anything! 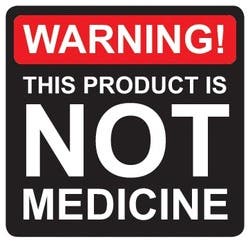 The main problem is using only homeopathy as a treatment. This can be very dangerous, as has been shown numerous times; when homeopathy is used in place of real medicine, the risks are real. From Calgary, an avoidable child death has been linked to the use of homeopathy instead of medicine. In 2002, 1-year-old Isabella Denley was prescribed medications for her epilepsy. Instead of using them, her parents consulted an iridologist, an applied kinesiologist, a psychic and an osteopath. She was being treated purely with homeopathic medication when she died. The infant girl, Gloria Thomas, died of complications due to eczema which was treated only with homeopathy. Eczema! This is an easily manageable disease, and her parents were declared guilty of manslaughter — and rightfully so.  By the time she died, she was the weight of an average three-month-old, her body was covered with angry blotches and her once black hair had turned completely white.

These are not isolated cases. Using homeopathy instead of real treatment is dangerous, and you should not do it! If you are rejecting medicine and treating your child only with homeopathy, you’re putting him or her at risk. That’s the bottom line, and there’s no going around it. As Bad Astronomy’s Phil Plait puts it, it is “perhaps the most ridiculous of all ‘alternative’ medicines, since it clearly cannot work, does not work, and has been tested repeatedly and shown to be useless.” Even though this relatively simple and highly manageable disease killed his daughter, Thomas Sam stood by his beliefs in homeopathy — don’t make the same mistake!

A note on natural remedies

There is a lot of confusion with people mistaking homeopathy with naturopathic treatments. That’s a separate discussion, but for now, let’s just say that the two things are very different. Natural remedies (herbs, teas, plants, etc) are not homeopathy. You should always consult with your doctor or pharmacist before taking anything, and only follow treatments prescribed by an authorized physician.