by Tibi Puiu
in Biology, Health & Medicine, News
Reading Time: 2 mins read
A A
Share on FacebookShare on TwitterSubmit to Reddit

At the turn of the new year, we marveled how Swedish doctors transplanted no less than nine wombs in patients who suffered from Mayer-Rokitansky-Kuster-Hauser syndrome or MRKH. Now a team of researchers from Mexico and the US have gone a whole step further – they engineered vaginal tissue in the lab and transplanted it in four women diagnosed with MRKH. Eight years later, their reproductive organs are functioning normally and are sexually active.

About one in 4,500 women are diagnosed with MRKH,  a disease which causes the vagina not to form properly during development and, generally, is characterized by a missing uterus.  Current treatment is mostly through dilation, or in severe cases, surgical reconstruction of the vagina. One type of such surgery involves carving a canal by dissecting  the space where the vagina failed to form and lining it with a graft [McIndoe procedure]. Unfortunately, the grafts don’t contain all of the layers of the vagina, with the missing component that is most common being the muscle layer.

Doctors collected vaginal tissue samples from four women diagnosed with MRKH, aged 13—18 years, during May 2005 and August 2008. The cells from the vulvar tissue were cultured in a lab, then the researchers seeded epithelial and muscle cells onto biodegradable scaffolds which were designed following MRI scans. The scaffolds were incubated for seven days to allow the cells to expand and grow. Once these were deemed ready, they were surgically implanted to the patients. 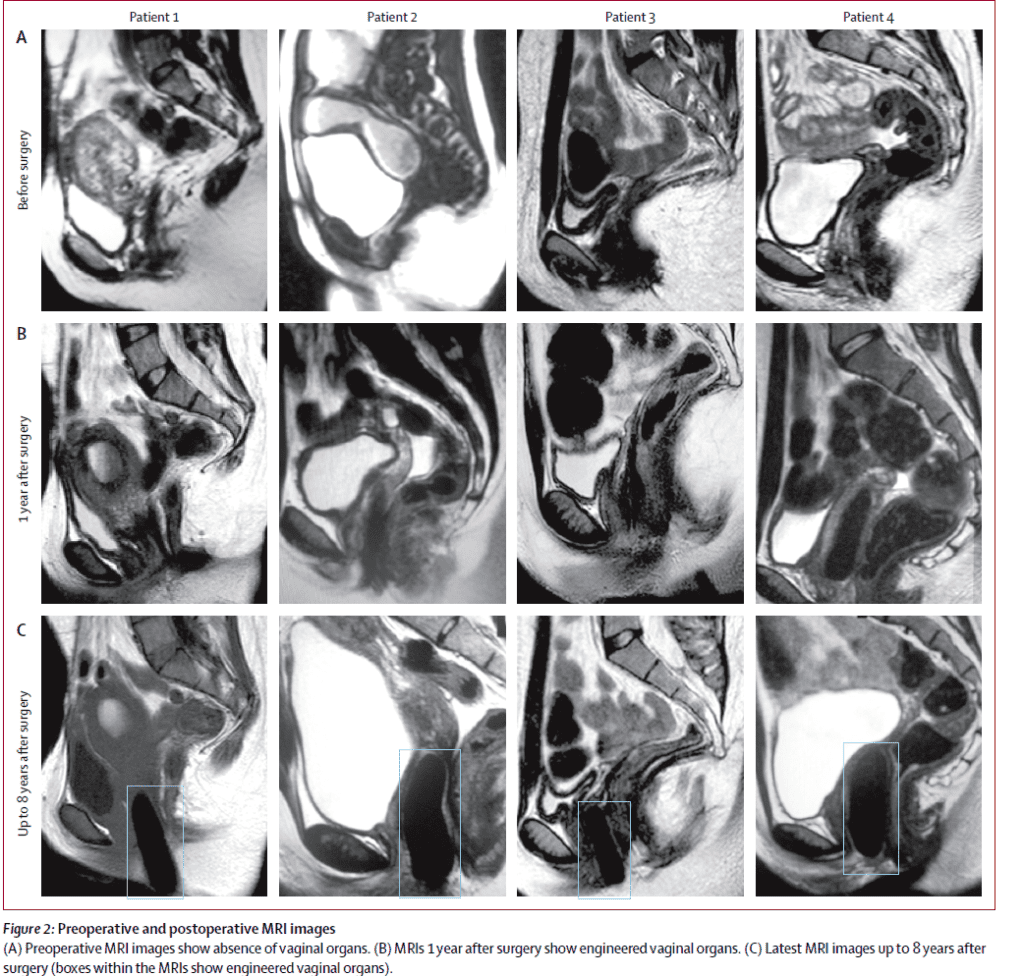 All the patients fared well, except one case where a complication elicited a second surgery six months later, but everything fell in order for her too afterwards. Essentially, the doctors engineered in a lab vaginal organs and implanted them in humans – eight years later the extensive follow-up study concludes that the women are healthy and sexually active with the constructs in place.

It’s not only MRKH diagnosed women that may benefit from the findings of this pilot study. CAIS women, virilized CAH women,  intersex women, and any woman whose vagina was damaged may choose to follow the same procedure. Findings were published in The Lancet.