by Mihai Andrei
in Health & Medicine, Inventions, Materials, News
A A

Creating artificial blood vessels is a pivotal aspect of reconstructive medicine. However, time and time again this has proven very tricky to accomplish. Now, a researcher believes he has found the key: weaving blood vessels with cotton candy machines.

Traditionally, researchers would allow cultured cells to spontaneously develop capillary systems of their own. This process can be very lengthy, taking weeks or months, and is very delicate. Leon Bellan, assistant professor of mechanical engineering at Vanderbilt University, wanted to try something different so he went for a top-bottom approach, finding help in an unexpected area: cotton candy.

“So far the other top-down approaches have only managed to create networks with microchannels larger than 100 microns, about ten times the size of capillaries,” he said. In addition, many of these other techniques are not able to form networks as complex as the cotton candy approach.

In an article published online on Feb. 4 by the Advanced Healthcare Materials journal, Bellan and colleagues report that they have finally succeeded in their unorthodox technique, creating a three-dimensional artificial capillary system that can keep living cells viable and functional for more than a week – a great breakthrough, especially when considering today’s alternatives.

“Some people in the field think this approach is a little crazy,” said Bellan, “But now we’ve shown we can use this simple technique to make microfluidic networks that mimic the three-dimensional capillary system in the human body in a cell-friendly fashion. Generally, it’s not that difficult to make two-dimensional networks, but adding the third dimension is much harder; with this approach, we can make our system as three-dimensional as we like.”

Like many other artificial tissues, this relies on a class of materials called hydrogels. A hydrogel is a network of polymer chains that are hydrophilic, they don’t absorb water because they are saturated with it. Hydrogels are very interesting because their properties can be tuned to closely mimic those of the natural extracellular matrix that surrounds cells in the body.

However, even when you have the right technique, creating bio-materials from hydrogels isn’t easy. Especially when designing materials for blood vessels, you encounter a specific paradox, something that Bellan calls the “Catch 22“:

“First, the material has to be insoluble in water when you make the mold so it doesn’t dissolve when you pour the gel. Then it must dissolve in water to create the microchannels because cells will only grow in aqueous environments,” he explained.

So far so good – now they’re working on improving the method and making it available to as many people as possible.

“Our goal is to create a basic ‘toolbox’ that will allow other researchers to use this simple, low-cost approach to create the artificial vasculature needed to sustain artificial livers, kidneys, bone and other organs,” Bellan said.

See a video of how it works here: 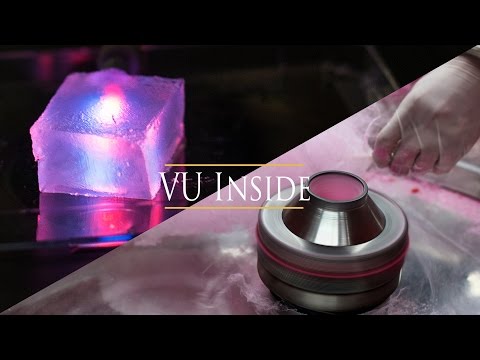