Researchers performed MRI scans on babies to see how their brains developed from birth to later stages. Their findings reveal the explosive growth of the human brain following birth: in just 90 days, the baby brain grows by 64% reaching half the adult size.

by Dragos Mitrica
in Health & Medicine, Neurology, News
Reading Time: 3 mins read
A A
Share on FacebookShare on TwitterSubmit to Reddit 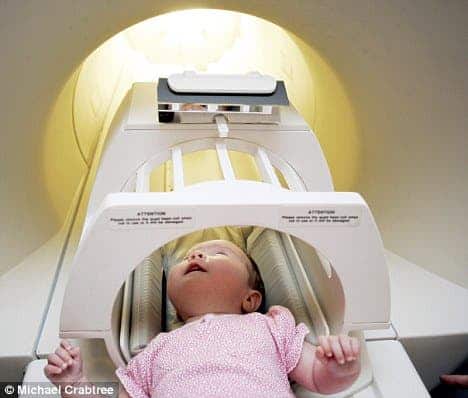 Researchers performed MRI scans on babies to see how their brains developed from birth to later stages. Their findings reveal the explosive growth of the human brain following birth: in just 90 days, the baby brain grows by 64% its initial size reaching half the adult size.

[ALSO READ] Baby brains benefit from music, even before they walk

They grow up so fast

Traditionally, brain growth is followed the old fashioned way using a measuring tape. This way, doctors casually record skull, and consequently brain growth and if any deviations from a known patterns are encountered, they then further investigate. For instance, premature babies have a smaller brain and develop slower than those delivered at term. As we all know, skulls vary in shape and size and they’re not the best metric for gauging brain size.

Lucky for scientists, there are MRI scanners. Researchers at University of California scanned the brains of 87 babies, healthy and delivered at term, from birth until three months of age. They saw the most rapid changes immediately after birth – newborn brains grew at an average rate of 1% a day. This slowed to 0.4% per day at the end of the 90-day period. The highest growth rate among brain structures was for the cerebellum, an area of the brain involved in movement. Oppositely, the hippocampus which is responsible for memory formation and retrieval showed the least growth. Apparently, in its early stages the brain wants to concentrate resources on getting the heck out – ‘guh, guh, dadah’ is enough for now.

“This is the first time anyone has published accurate data about how babies’ brains grow that is not based on post-mortem studies or less effective scanning methods,” Dr Martin Ward Platt, a consultant paediatrician at the Royal Victoria Infirmary in Newcastle.

“The study should provide us with useful information as this is an important time in development.

“We know, for example, if there are difficulties around the time of birth, a baby’s growth can fall away in the first few months.”

[RELATED] Why you don’t have memories before age 3-4

By closely following brain development in its early formation days, researchers hope to spot clues that might help them  identify early signs of developmental disorders such as autism.Scientists will now investigate whether alcohol and drug consumption during pregnancy alters brain size at birth. Findings appeared in JAMA Neurology.