by Tibi Puiu
in Environment, Technology 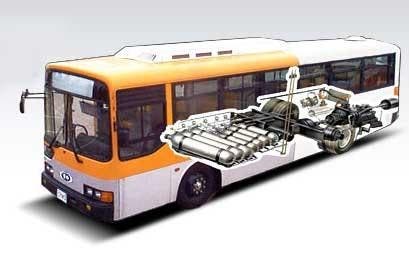 The analysis was  was specific to the Greater Lafayette Public Transportation Corp., also known as CityBus, which operates 72 buses and cares for 30,000 riders daily. The team prompts, however, that their findings can be extended across all bus systems across the country.

The company already runs a couple of diesel-electric hybrid buses which have a higher fuel economy than a standard diesel bus but considerably higher capital expense in the form of higher bus costs. While operation costs can make diesel-hybrid buses feasible in the long run, high capital costs makes the initial investment difficult to make.

“Because of the lower fuel price and pollution reduction, the CNG bus is considered to have good potential as an alternative vehicle used in the public fleet in the United States,” Tyner writes

Purdue researchers found that over the course of 15 years, even with the $2 million expense of building a natural-gas fueling station, the natural-gas system would cost $48 million over the span of the project, compared with $54 million for the diesel-electric and $48.5 million for the diesel-only, according to the report. The analysis takes into account fluctuations in diesel and natural gas prices, operation costs and maintenance.

“Moreover, from the environmental perspective, the implementation of compressed natural gas (CNG) buses in the fleet would also produce less emission and provide benefit to the environment of the local society,” the report says.

The  natural-gas option has a 65 percent to 100 percent chance of being lower cost than the diesel option, considering fuel price forecasts. Natural gas has become ever cheaper in recent years mainly due to massive shale gas exploitation. Shale gas production is expected to increase until 2035.

Full report can be viewed here.