The world's first grid-connected wave power station has just been activated off the coast of Australia. Taking energy directly from the waves and sending them to the grid is a remarkable achievement which will hopefully be replicated in Australia, as well as in other parts of the world.

The world’s first grid-connected wave power station has just been activated off the coast of Australia. Taking energy directly from the waves and sending them to the grid is a remarkable achievement which will hopefully be further replicated in Australia, as well as in other parts of the world.

Wave power is one of the renewable energy sources with the most potential, although realistically, it’s still miles away from having a major impact on the world. But Australian company Carnegie Wave Energy wants to change that – they developed a project which takes transfers wave energy straight into the electrical grid.

“This is the first array of wave power generators to be connected to an electricity grid in Australia and worldwide,” said Ivor Frischknecht, CEO of the Australian Renewable Energy Agency, in a statement. The Agency has provided $13 million of the $32 million project.

Wave-power generation is not currently a widely employed commercial technology, although there have been attempts to use it since at least 1890. In 2008, an experimental wave power station opened in Portugal, but the wave farm was shut down two months after the official opening in November 2008 as a result of the financial collapse of the company running it.

So far, everything seems to be smooth sailing in Australia:

“During the testing phase, the first 240kW peak capacity CETO 5 wave unit operated successfully for more than 2,000 hours. The innovative CETO technology moves with the waves to drive tethered seabed pumps and operates under water, providing protection from storms and corrosion.”

The system is different from currently existing wave plants, because it operates under water, safe from storms and corrosion. The round, submerged buoys are tethered to seabed pump units, which are installed at a depth of between 25 and 50 metres. As the wave crash into the buoys and transfer their energy, pressurized seawater is pushed through a pipeline beneath the ocean floor to an onshore hydroelectric power station. Here, the high-pressure water drives a turbine and generates electricity. The zero-emission energy will generate energy for a hydroelectric plant and a desalination plant, thus helping generate more energy and fresh water.

“The high-pressure water can also be used to supply a reverse osmosis desalination plant, replacing or reducing reliance on greenhouse gas-emitting, electrically-driven pumps usually required for such plants,” the company states on its website. 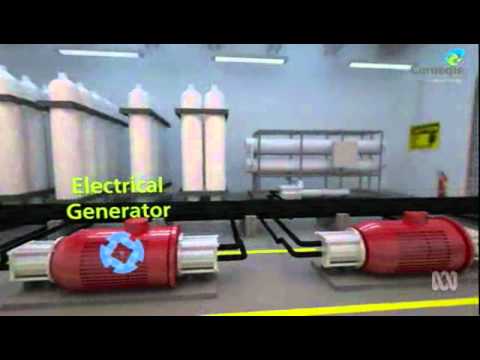 So far, all the stakeholders have worked together successfully, and the entire project seems to be on track for major achievements.

“This progress is a clear example that given time, and with the right government support, emerging renewable energy technologies can progress along the innovation chain towards commercialisation. The lessons learned through Carnegie’s ARENA supported projects are being shared with the renewable energy industry to help reduce the hurdles facing other wave energy projects.”

The company is already considering scaling things up. Carnegie chief executive Michael Ottaviano told The West Australian the project could pave the way for much bigger versions capable of powering entire towns:

“The challenge from here on is really about scale and cost,” he said. ”We need to make the technology bigger, we need to make our projects bigger because that’s what allows you to get your costs down. Our wave resources in Western Australia are the best in the world, and theoretically, the resources that hit our coastline everyday could power the state 10 times over,” Ottaviano told ABC News.