Canada is building the world’s longest trail, and it’s humongous

Are you a hiking addict? Then you'll probably want to book a ticket for Canada in 2017.

by Mihai Andrei
in Environment, News, Offbeat
Reading Time: 2 mins read
A A
Share on FacebookShare on TwitterSubmit to Reddit

Are you a hiking addict? Then you’ll probably want to book a ticket for Canada in 2017.

The Trans Canada Trail – generally called the Great Trail – will be a 14,864-mile network. That’s almost 24,000 kilometers of pure awesomeness for you to hike on. The trail will be completed in 2017, as Canada celebrates 150 years of independence. Walking/hiking, cycling, paddling, horseback riding, cross-country skiing and snowmobiling are all encouraged.

Connecting over 400 community trails, the Great Trail starts in St. John’s, the capital and largest city in Newfoundland and Labrador, eastern Canada. It then moves on northwest just over the US border, close to Montreal and Ottawa, heading by Lake Huron and Lake Superior, through Calgary, the Canadian Rockies and reaching Vancouver. The trail does a split at Edmonton, with the other branch heading way north, in the true Canadian wilderness, through Yukon and ultimately reaching the base of the Nicholson Peninsula, a broad ice-covered peninsula where freezing temperatures are the norm. 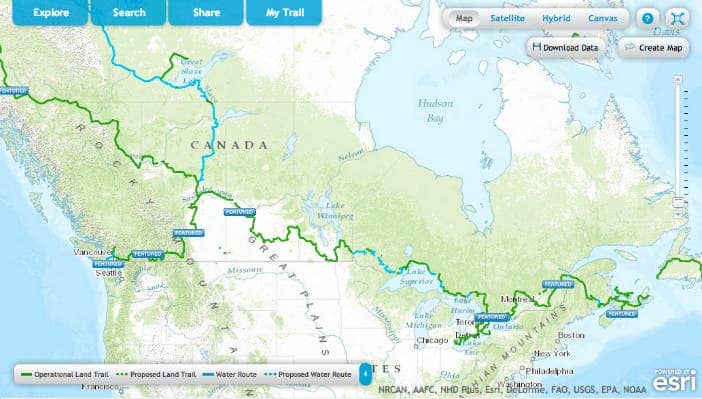 Although I don’t imagine there’d be many volunteers willing to hike the whole thing from one end to the other, the trail is still a remarkable achievement, a real gift “from Canadians to Canadians”, as authorities have touted it. It’s estimated that four out of five Canadians live within 30 minutes of the trail.

The project involved not only government authorities but also thousands of volunteers, environmental organizations and municipalities. Therefore, no one technically owns the entire trail, which is rather a network of locally administered trail portions. But no one is thrilled by it.

Cyclists, for example, complain that the trail is erratic and hard to navigate in some sections. Furthermore, environmental groups have signaled that in some areas, the trail could threaten some habitats. Still, construction is going as planned and the whole thing will be connected next year. But the Trans Canada Trail president and CEO Deborah Apps said that the trail will never really be finished.

“2017 is just the beginning of our story. The Trail will never be complete. We will continue to build and improve this treasure for generations to come.”