A surprising innovation in wind turbine design named a ‘wind lens’ could triple the output of energy generated by wind, thus making it cheaper than nuclear power. 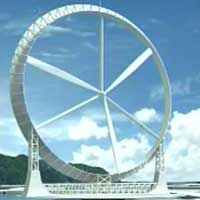 The thing is, wind power is proportional to the wind speed cubed; so basically if you could increase the speed two times, the energy output would be increased 8 times. So if we could somehow increase the energy output, the efficienty of a wind turbine would be increased substantially. With that thought in mind, the wind energy section of Kyushu University, a new efficient wind power turbine system has been developed.

This novel system has a diffusal shroud at the circumference of its rotor with the purpose of embodying wind energy. The diffuser shroud is now named “Wind lens”.

Wind energy is already growing in importance, and it is already a significant source of energy in several developed countries. However, the main problem with wind energy is that it isn’t reliable; there may just not be enough wind to go around.

There is also another problem; although this is a lofty goal, and the technology is well in our reach, we will not be able in the near future to efficiently store energy for later use, and thus, wind energy can only be a complement of other sources of energy. A significant factor that can be decisive, but a complement nonetheless.