by Mihai Andrei
in Environmental Issues, World Problems
Reading Time: 2 mins read
A A
Share on FacebookShare on TwitterSubmit to Reddit 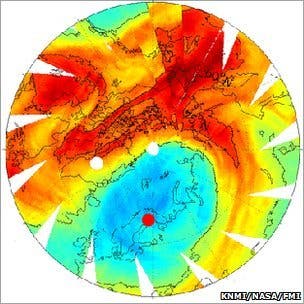 The ozone layer in the arctic regions has suffered unprecedented damage this winter due to cold weather in the upper atmosphere. By the end of March 40% of the ozone in the stratosphere had been destroyed, compared to the previous record of 30%.

The European Space Agency, the UN World Meteorological Organization (WMO) as well as the Alfred Wegener Institute for Polar and Marine Research have all been monitoring the situation in the arctic regions, and all of them have confirmed the dramatic depletion.

According to the WMO, “depletion of the ozone layer … has reached an unprecedented level over the Arctic this spring because of the continuing presence of ozone-depleting substances…”

The European Space Agency also notes that “Envisat satellite has measured record low levels of ozone over the Euro-Atlantic sector of the northern hemisphere during March.”

The ozone layer may be the ultimate protection against harmful radiation, but it is also extremely vulnerable to chemical substances. The dramatic loss is caused by surprisingly strong winds known as the polar vortex, which secluded the atmospheric mass over the North Pole. To put it in blunt terms, things are bad, and they will get worse.

“Our measurements show that at the relevant altitudes about half of the ozone that was present above the Arctic has been destroyed over the past weeks,” Alfred Wegener Institute for Polar and Marine Research in the Helmholtz Association (AWI) researcher Markus Rex said in early March. “Since the conditions leading to this unusually rapid ozone depletion continue to prevail, we expect further depletiofn to occur.”