A private company in Hong Kong known as the Hong Kong Nicaragua Canal Development Investment Company (HKND) has been given the green light to start the $50 billion work on a canal that will connect the Pacific and the Atlantic Ocean through Nicaragua. The project, which will be significantly longer than the Panama canal could bring huge economic benefits, saving a lot of time and resources, but it also raises major environmental concerns.

by Mihai Andrei
in Environmental Issues, Technology
A A

A private company in Hong Kong known as the Hong Kong Nicaragua Canal Development Investment Company (HKND) has been given the green light to start the $50 billion work on a canal that will connect the Pacific and the Atlantic Ocean through Nicaragua. The project, which will be significantly longer than the Panama canal could bring huge economic benefits, saving a lot of time and resources, but it also raises major environmental concerns.

A Pristine Land, an Ambitious Project

About one fifth of Nicaragua’s territory is designated as protected areas like national parks, nature reserves, and biological reserves. Good soils and a favourable climate combine to make western Nicaragua the country’s economic and demographic centre, while the unique conditions in several places harbor a spectacular biodiversity. Especially in areas like Lake Nicaragua, life is peaceful and rustic… but that’s about to change, for better or for worse.

Last June, Nicaragua has granted a 50 year concession to the Hong Kong company to start building and operating the canal. The 172-mile canal will 121-miles longer than the 51-mile Panama Canal, and also much wider and deeper than the Panama Canal. It will be the biggest engineering project in human history! Construction will run from the Rio Punta Gorda on the Caribbean Coast to Brito on the Pacific and ships are slated to pass through it in 2019 – a very short development time, considering the scale of the project. The report released by the company was very optimistic:

“The first decade of the 21st century saw unprecedented changes in global maritime trade. Volume of global trade increased rapidly prior to the 2008-09 financial crisis, with one of the drivers being China’s own growth and the fact that China became a main trading partner of many developed and developing economies alike. Post-financial crisis, China and many other countries in the global economy have faced lower economic growth trajectories. Yet after some consolidation, China should be expected to again accelerate its own economic growth in the coming decades, while many other countries will reestablish more respectable growth rates than those experienced in recent years,” according to the HKND Group report.

That seems incredibly optimistic (especially the costs and the completion date), but there are also other concerns: the environmental hazards are huge; environmental engineer Pedro Alvarez of Rice University, a co-corresponding author of a paper titled “Scientists Raise Alarms About Fast Tracking of Transoceanic Canal Through Nicaragua,” expressed his concerns:

“The biggest environmental challenge is to build and operate the canal without catastrophic impacts to this sensitive ecosystem […] Significant impacts to the lake could result from incidental or accidental spills from 5,100 ships passing through every year; invasive species brought by transoceanic ships, which could threaten the extinction of aquatic plants and fish, such as the cichlids that have been evolving since the lake’s formation; and frequent dredging, impacting aquatic life through alterations in turbidity and hypoxia, triggered by resuspension of nutrients and organic matter that exert a relatively high biochemical oxygen demand.”

I think this quirky video does a good job at summing things up: 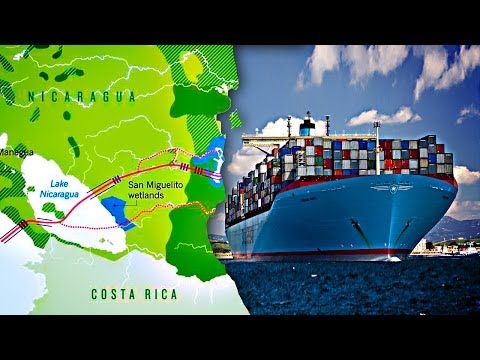 Visit Lake Nicaragua… While You Can

Indeed, this seemed to be the case time after time, whenever this type of project was done. To add more things to the list of problems, no less than 30,000 people will have to be relocated – and Nicaragua Lake will basically be destroyed. Lake Nicaragua is the largest source of freshwater not only for Nicaragua, but for the entire Latin America.

“In terms of the canal impact on Lake Nicaragua, one big concern is the damage to the quality of the water; the ship traffic will pollute the water with toxic sediments and industrial chemicals and introduce destructive invasive species, plants and animals,” Dr. Jorge A. Huete-Perez, vice president of the Nicaraguan Academy of Sciences and director of the Molecular Biology Center at the University of Central America told CNN. “Dredging of the lake for the construction of the canal will render the lake a ‘dead zone’ because of hypoxia, eutrophication and turbidity.”

London-based scidev.net reported that an independent commission of experts — including scientists from the InterAmerican Network of Academies of Science, Nicaraguan Academy of Sciences and International Council for Science — had reached the same conclusion.

But despite all these environmental concerns, the project is already underway, and Lake Nicaragua seems doomed… and one of the most spectacular and unique environments in the world will vanish. At Padre Nello School on Lake Nicaragua, about 90 children canoe to school each day. Jicaro Island EcoLodge works with Padre Nello to bring clean water to the children and educational projects that encourage sustainability on the lake (source). Nicaragua still remains one of the few pristine places on Earth, one of those rustic places out of the way of modernity. But that’s about to change soon. What do you think about this?