by Tibi Puiu
in Environmental Issues
Reading Time: 3 mins read
A A
Share on FacebookShare on TwitterSubmit to Reddit

For the past few months, the mighty Katla volcano, close to the Icelandic coast, has been exhibiting intense seismic activity, hinting towards an imminent eruption. With a caldera of 10 kilometers, a long history of causing havoc and pain, Katla has the potential of flooding the Atlantic Ocean with billions of gallons of water left over from the melting of its frozen surface, as well as climate change aftermaths.

“There has been a great deal of seismic activity,” says Ford Cochran, National Geographic‘s expert on Iceland.

Just recently, only in the month of October, about 500 tremors were registered around the caldera of Katla, suggesting magma movement and intense seismic activity. On July 9th a small eruption occurred, foretelling of a greater eruption in the near future,  and since then Icelandic scientists have been closely following Katla’s activity. 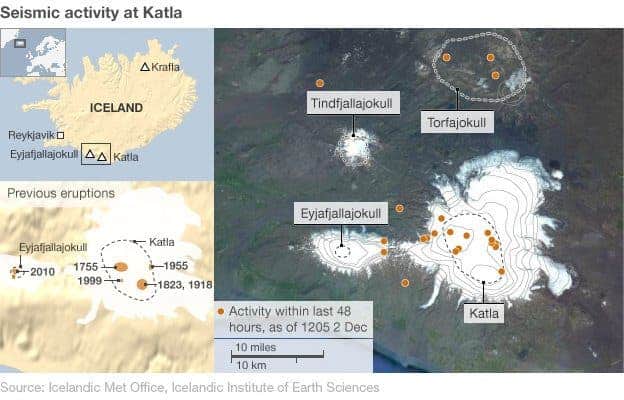 “The 9 July event seems to mark the beginning of a new period of unrest for Katla, the fourth we know in the last half century,” says Professor Pall Einarsson, who has been studying volcanoes for 40 years and works at the Iceland University Institute of Earth Sciences.

“The possibility that it may include a larger eruption cannot be excluded,” he continues. “Katla is a very active and versatile volcano. It has a long history of large eruptions, some of which have caused considerable damage.”

Some short historical milestones from Katla’s havoc wrecking past: in 1918, the last recorded major Katla eruption was so powerful that entire glaciers were swept towards the ocean. In 1755, the volume of water produced by its eruption was equal to that of all the world’s rivers combined. In 1783 volcanoes in the area, not only Katla, erupted continuously for eight months, the results of which would very much resemble the effects of a nuclear winter – ash, hydrogen fluoride and sulfur dioxide clouded the sky. Back then one in five Icelanders were killed, along with half of the country’s entire livestock.

Some of you might remember another recent eruption from Iceland, though not of Katla, but of Eyjafjallajokull. The name might not ring a bell, but you might recall how air traffic around Europe was halted for days; and Eyjafjallajokull is just like a little cousin compared to Katla. Back in 2010, scientists said a Katla eruption could be ten times stronger than the wrath of Eyjafjallajokull and shoot larger and higher plumes of ash, and also result in a tremendous amount of water seeping through Katla’s opening.

Based on previous patterns, that have Katla massively erupting every 40 to 80 years, it seems that the volcano is due. However, one should not threat too hard upon its consequences. A number of media outlets in the past few days have been over-hyping the effects that Katla’s eruption would pose, the most notable of which is the claim of a global impact. Apart, maybe, from some unpleasant groundings of air traffic in Europe, if the wind conditions are unfavorable, there’s little impact farther from its local surroundings that Katla might be able to generate. Still, Iceland will continue to tread on thin ice for the upcoming months. Pun intended.