Most endangered gorilla species caught for the first time on film 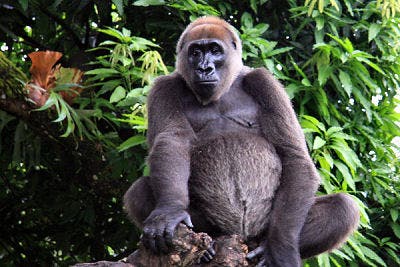 The Cross River gorilla is a critically endangered gorilla species, native to the border region of Nigeria-Cameroon. Today, only about 250 to 300 individuals are alive, due to habitat loss and poaching, making it the rarest of all four gorilla species. It’s so rare and elusive, that no one has ever been able to record a Cross River gorilla, and were it not for a few photos, the outside world would’ve had no idea of their existence. Camera traps displaces around Cameroon’s Kagwene Gorilla Sanctuary, however, have offered us a true gem – live footage of not one, but eight Cross River gorillas.

The video is truly extraordinary, and in just one minute of released footage, one can see 3% of the species walking casually through the reservation. One of the gorillas, at some point, can be seen rushing through in front of the camera, while beating his chest, offering an unique moment. On the other side of the scale, one of the pack’s gorillas is disturbingly missing an arm, most likely caused by a snare left by poachers.

“Spectacular footage such as this, which we’ve never had before for Cross River gorillas, is absolutely vital to inspire local people, the governments of Nigeria and Cameroon, and the global community to care about and to save this unique subspecies,” James Deutsch, executive director for WCS’s Africa Program, said in a prepared release. “Continued research of this kind will help fine-tune management plans to protect this rarest of apes.”

Scientists claim that the whole Cross River gorilla population is dispersed around a mountainous strip, 12,000 km long. It’s this extremely low density that makes them so hard to spot – maybe, ultimately, this is what allowed them to survive in the first place.

“Cross River gorillas occur in very low densities across their entire range, so the appearance of a possible snare injury is a reminder that continued law enforcement efforts are needed to prevent further injuries to gorillas in the sanctuary,” said Liz Macfie, gorilla coordinator for WCS’s Species Program.