Of all the despicable things I thought possible going on around the Amazonian Rainforrest,  using an extremely powerful chemical agent on the forest would’ve never crossed not even the darkest region of my conscious. It’s indeed petrifying what the human mind can conjure up for profit.

Agent Orange is the chemical in question, and is one of the herbicides and defoliants used by the U.S. military as part of its herbicidal warfare program, Operation Ranch Hand, during the Vietnam War. It provides a quick and easy deployment from the air via an helicopter, and the surface deforested can amount to entire hectares on a single flight. It also doesn’t draw as much attention as a chainsaw or tractor.

This is why some ranchers decided to use the method. Brazil’s environmental agency IBAMA detected through an aerial survey, from a few weeks back, 440 acres of rainforest that had been sprayed with the compound – poisoning thousands of trees and an untold number of animals, potentially for generations. The agency began the surveying operation after satellite imagery showed trees in the Amazonian forest ash-colored and defoliated by toxic chemicals.

Curiously enough, last week, IBAMA found approximately four tons of Agent Orange hidden in the forest awaiting dispension. If released, the chemicals could have potentially decimated some 7,500 acres of rainforest, killing all the wildlife that resides there and contaminating groundwater. In this case, the individual responsible was identified and now faces fines nearing $1.3 million.

The method in question seems to have sprung out again, since the last case involving it was reported in 1999. Officials however claim that the method might have been more thoroughly used, but has remained undetected so far. More such cases are predicted to appear now with intensification in environmental crime hunt in Brazil. 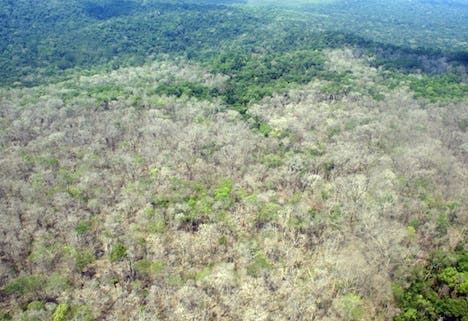 “They [deforesters] have changed their strategy because, in a short time, more areas of forest can be destroyed with herbicides. Thus, they don’t need to mobilize tree-cutting teams and can therefore bypass the supervision of IBAMA,” says Jerfferson Lobato of IBAMA.

During the Vietnam War, some 12 million gallons of Agent Orange were dispersed above the Vietnamese forests, impacting the health of some 3 million, mostly peasant, Vietnamese citizens. Reportedly, 400,000 people were killed and 500,000 children were born with defects as a direct effect to the exposure to the pesticide. Additionally, the chemical’s effect on the environment have been profound and lasting.